I have a question for you.

Can you recall the last time you thought about yodeling?

I don’t necessarily mean the last time you felt the urge to belt out a yodel-icious tune (although I’d love to hear that).

But, when did you last consider the concept of, you know, yodeling? 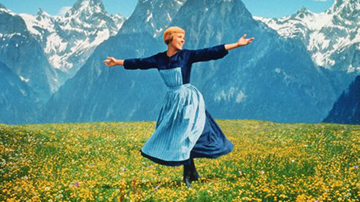 The Sound of Music

You can’t deny it, though …

You’re thinking about it now.

Okay, why all the yap about yodeling?

I ran across an old video clip of the pretty pop singer yodeling her heart out, and I was hooked. It was like some kind of crazy vocal yoga that launched into a full-fledged gymnastic gabblefest. 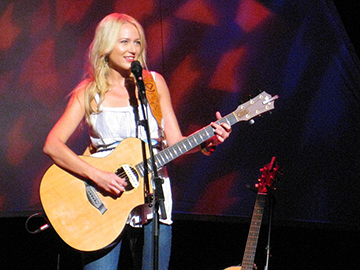 Photo of Jewel by Jennifer Stoddart, courtesy of Wikimedia.

Needless to say, this morning, I find myself thinking about it again.

My sudden yen for yodeling led me to a couple of other gals known as The Cackle Sisters. Carolyn and Mary Jane DeZurik grew up on a Minnesota farm nearly a century ago, and they yodeled their way right on down to the Grand Ole Opry. How’d they do it? Carolyn attributed their fame to feathered friends. “We listened to the birds and tried to sing with the birds,” she said. 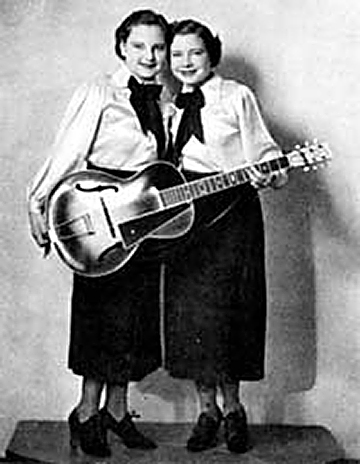 Photo of The Cackle Sisters, Carolyn and Mary Jane DeZurik, courtesy of Wikimedia

Hmmm … is that how yodeling started in the first place? Did it begin with the birds? I don’t suppose anybody knows for sure, but I simply had to find out more about this, er, unsung tradition.

First of all, yodeling is a more geographically diverse pastime than you may realize. I assumed it lilted down to the rest of the world from the snowy peaks of the Alps. Heck, even the term “yodeling” stems from the German word jodeln, which basically amounts to a joyful exclamation.

I can see that.

Moreover, the sing-song sounds that we recognize as yodeling were, indeed, used in Germany, Switzerland,  and Austria as a long-distance means of communication among highland shepherds.

Despite their claim to yodeling fame, though, the alpine folk aren’t the world’s first yodelers.

The yodel can be traced deep into the heart of Africa, where it was believed to ward off evil spirits (listen to the yodeling Baka women of the central African rainforest).

Tibetan monks were yodelers, too, according to Marco Polo. Let’s just say that the famed explorer brought more than spices back to Europe from his world travels. Did he recite a yodel as soon as he stepped off the boat, or did he bring a monk from Tibetto do it? Either way, he set a fad in motion that made history in high places.

Yodeling migrated down the slopes of the Alps to our fair shores with the early European settlers, and it was eventually adopted by the American cowboy as a means of soothing “little doggies” to sleep under wide, starry skies.

From Lhasa to lederhosen to longhorn lullaby? That’s something to sing about.

So, if yodeling has such staying power, why does it seem to be slipping through the crevices of modern culture? (Did you know that in 1942, Franklin Roosevelt held a yodeling concert in the White House?)

Perhaps it’s just because we don’t have the time (or privacy) to practice it anymore.

Jewel has admitted that her early yodeling attempts didn’t win any popularity contests, saying, “Hearing someone learn to yodel is not pretty!”

Still, when you hear her yodel today, you realize that all of the high-pitched humiliation was worth it.

So, here you are, thinking about yodeling …

And some part of you is dying to give it a try.

For a little encouragement, look to Doreen Kutze in Berlin (yep, back to Germany). Kutze teaches a yodeling class in her hairdressing salon!!!! that’s tucked unassumingly into one of the city’s grittier districts. Her approach ditches the kitsch and taps into liberation, trading in a few perms for yodels.

“Children pick up yodeling a lot faster than adults because they can mimic and are so uninhibited. They have no fear,” Kutzke told Reuters. “Yodeling can get rid of stress and it can really put you in a good mood because adults are rarely so loud … there’s this ‘Aha!’ factor, when you realize ‘I can sing loudly—I’m allowed to sing LOUDLY!'”