You’ve probably heard the old farmer’s tale that if you see cows lying down, it’s going to rain. Sometimes true, sometimes not, in my experience.

Or how about this? According to the Farmers’ Almanac:

“If you can locate a cow or horse, note which way their tails are facing. People have observed that cows and horses prefer not to have the wind blowing in their faces, so they usually stand with their backs to the wind. Since westerly winds typically mean arriving or continuing fair weather and easterly winds usually indicate arriving or continuing unsettled weather, a tail is as good a way as any of knowing what the weather will be up to for the next few hours.”

But I’ve recently noticed that my herd of Heritage Jerseys like to lie in the sun.

I mean really soaking up the rays. 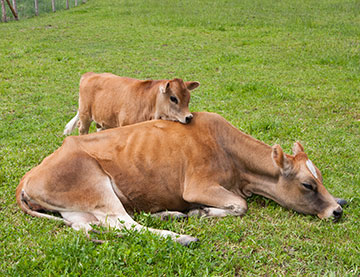 We’ve had temperatures in the 90s and 100s for the last week or so, and I’ve worried about my precious bovine babes. But no matter how near, how convenient, how tantalizing I make their shady shelters, they seem to plop right down in the middle of the pasture under the blazing sun.

Cows have a relatively constant internal body temperature of 100-102ºF (quite a bit higher than we humans, so they might not feel the heat as much). When a cow’s metabolism converts its feed to the production of milk (rumination), heat is produced as a by-product, raising the animal’s internal temperature. So they eat less on hot days and drink more (standard-sized cattle drink around 30 gallons of water a day—an average bathtub full), but they don’t seem to crave the cool—I’ve never seen them lying in the creek, so to speak. And the Jersey breed is thought to have originated in the Middle East—built for heat, you might say.

So I’m guessing my girls are merely reducing their activity levels (and if you’ve ever observed a cow, you’ll know that “activity” equals eating). Cattle usually spend about 9 hours a day grazing, and from 8-15 hours a day lying down. On hot days, less grazing, less ruminating, more lying down …

in the blazing sun, apparently.