If Georgie White Clark and I had crossed paths, I have a feeling we might have been fast friends … 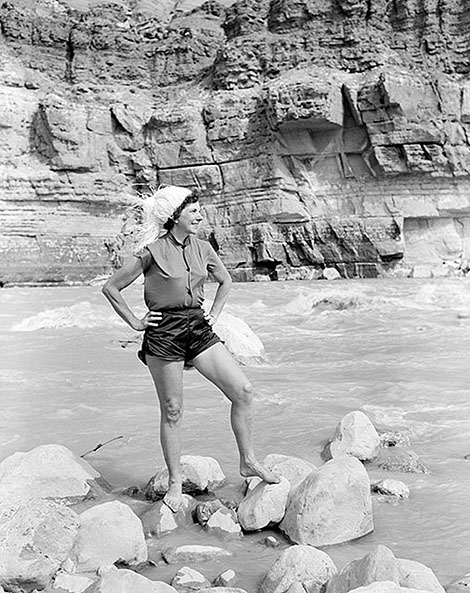 I encountered Georgie the other day, quite by accident. Catching a glimpse of the photo above, I immediately thought, “That’s my kind of gal.”

You see what I mean, don’t you? Bare feet, brash smile, white water … and that hat!

So off I went in search of Georgie, and I could hardly wait to introduce you to my new pal from the past …

The first thing anyone should know about Georgie is that she made her last raft trip (of many) down the Colorado River in 1991, at age 79, wearing a full-body, leopard-print leotard.

Photo of Georgie White courtesy of The Canyon County Zephyr

The second thing you should know about Georgie is that her love affair with the Grand Canyon and the wild Colorado River bloomed in 1945, taking root in the seemingly barren soil of heartbreak. The year before, Georgie’s second marriage was failing when tragedy struck: Her 15-year-old daughter, Sommona Rose, was killed in a hit-and-run accident while riding her bike. Seeking escape from her grief, Georgie joined a friend named Harry Aleson on a river excursion. With no money for a boat, the pair opted to swim.

In a river running at 48,000 cubic feet per second, that sounds like lunacy, right?

But, somehow, I imagine the challenge of swimming the river made Georgie’s trip all the more cathartic.

“They jumped in at Diamond Creek, wearing windbreakers, tennis shoes, and life jackets, and carrying backpacks packed with watertight tins for food,” writes Heather Hansman for Adventure Journal. “They were swept 60 miles down to Lake Mead, and Georgie became obsessed with the Colorado River.”

It was an obsession that Georgie likened to marriage, declaring, “I fell in love with the river, married it, and I don’t plan no divorce.”

Georgie’s immediate and unshakable passion for the river inspired her to launch her own commercial raft guiding company, Georgie’s Royal River Rats, at a time when women were rarely seen running the river, much less guiding. She expanded her guided trips to other rivers as well—the Green, Snake, and Salmon—as well as rivers in Mexico. The Grand Canyon was always sacred to Georgie, though, and it’s said that if you made it down the river with this rough-and-ready river guide, she’d dub you an official “rat” by cracking an egg on your head! 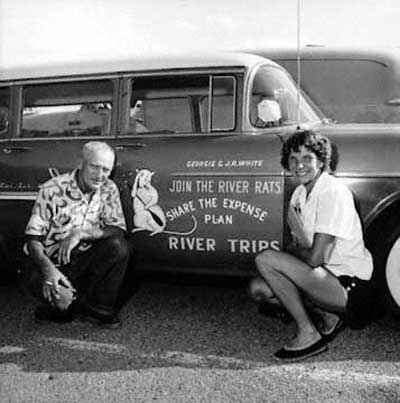 Even without meeting her, I can say for certain that Georgie did things her way.

“Georgie’s trips had no frills. She was known for surviving on beer and a few vegetables, and she didn’t bring much else,” explains Hansman. “Because of her bare-bones way of doing business, she charged much less than other outfitters and undercut their rates, upping her traffic. But she innovated the way people ran the river, too. She pressed the BLM for an organized permitting system and she invented the G-Rig, three boats strapped together with an outboard motor on the back.”

G-rigs (or “thrill rigs,” as Georgie called them) were the precursors to modern sweep rigs, stable rafts that allow bigger groups of people to travel downriver together. 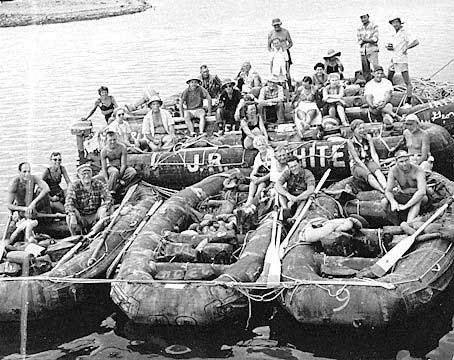 After 45 years on the river, and two years after her last raft trip in the infamous leopard-print leotard, Georgie sold her company and died in Las Vegas, leaving a bit of a mystery in her wake.

“For all her notoriety, Clark remains something of a mystery to even those closest to her. Evidence discovered at her home the day of her funeral raised the possibility Clark fabricated portions of her past, giving rise to a new element of the Georgie legend,” reports GrandCanyonTreks.org. “While the theory is discounted by several associates, there is a faction of friends who are puzzled by connections that suggest Clark was in fact Bessie Hyde, who vanished in 1928 along with her husband, Glen Hyde, while the Idaho couple were on a honeymoon adventure floating the Grand Canyon in a wooden boat.” 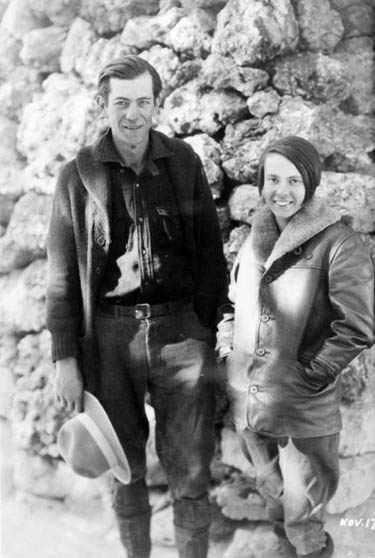 Photo of Glen and Bessie Hyde on November 17, 1928, courtesy of Northern Arizona University

GrandCanyonTreks.org continues, “Speculation about Clark’s connections to Bessie Hyde began when friends were going through her personal effects following her death … for starters, her birth certificate showed her real name was Bessie DeRoss, not Georgie. Clark, as well as another surname she sometimes used, White, were the last names of divorced husbands. While her 1977 autobiography waxed at length about a childhood in her native Chicago, she was actually born in Oklahoma and raised in Colorado.”

Friends also found a copy of the Hydes’ marriage license and a pistol that may have belonged to Bessie DeRoss in Georgie’s lingerie drawer.

But I’m looking forward to learning more about Georgie’s life and legend in her biography, Woman Of The River: Georgie White Clark, Whitewater Pioneer by Richard Westwood.

In the meantime, I know you’ll enjoy watching this rare clip of Georgie on the river in 1989 as much as I did:

Life Magazine pegged Georgie perfectly in a 1961 article, calling her a “new kind of iron-nerve mermaid.”