When Carol brought in her newest junk-sculpture creation, pictured above in our “Photo of the Day,” I was interested to see that, upon close inspection, the body of this little guy wasn’t a vintage Camel cigarette box, as you might think at first glance, but was, in fact, Camel Vulcanizing Patches. Say what??? 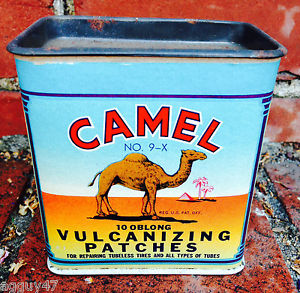 Vulcanizing patches are something you might remember from your childhood, if you’re my age. We used them to fix our bike tires, and before that, our parents and grandparents used them to fix their car and tractor tires. But why does the box look like a Camel cigarette box, you might ask? The answer isn’t monkey business, but it DOES involve a monkey. In fact, a monkey was instrumental in inventing this inventive way of fixing a tire.

I found the story on TireBusiness.com:

“Tire repair, as we know it today, began soon after a pneumatic tire was mounted for the first time on a motor vehicle by Michelin in 1885. Between the hazards of sharp stones on dirt roads and discarded horseshoe nails, you were lucky to travel 100 miles without a flat tire. The only method of dealing with a flat tire at that time was to take out the tube and patch it. Permanent repairs could only be made by the time-consuming, and costly, hot vulcanization process. A temporary repair could be made by using a surface patch affixed by cold cure acid and the casing made serviceable by a “skied boot.” Neither method was satisfactory, and the only effective way of dealing with a tire failure, until about 1920, was the fitting of a new or replacement tire and tube.

Specialist manufacturers of tire repair materials emerged following World War I. Some American companies had amusingly different claims about their origin, and one was written up in a 1920 issue of the Saturday Evening Post. It was about a man in Oklahoma City who, with his pet monkey, visited a friend’s bicycle repair shop. He placed the animal on a worktable while watching his friend repair a tire using the only known method at that time—a long, drawn-out process consisting of a liberal use of a sticky cement, a patch cut to size, and a long wait while it was vulcanized.

During the visit, there was a loud crash of tools and cans—the monkey had overturned a large can of rubber cement, an acid container, and another solution. While trying to clean the mess from the monkey’s paws, the man found that when he rubbed his palm over the monkey’s paws, he warmed the cement and little rolls of material came off. But as soon as he finished, the monkey was able to knead the rolls into a ball, since the cement had set and was no longer sticky.

Meanwhile, his friend became angry when he found the vulcanizer was not heating up properly and despaired at completing the tire repair. The man picked up some of the new rubber concoction, spread the gunk on the tire and asked his friend to try it, as it might cure without vulcanizing. After waiting several minutes, he pulled on the patch. It stuck. The tube was inflated and dunked under water. No bubbles. The men realized that they had developed a patch that would withstand the pressure of inflation and cured without heat. The patch was perfected and a few years later, Dallas-based “Monkey Grip” claimed to be the largest manufacturer of tire patches in the world. 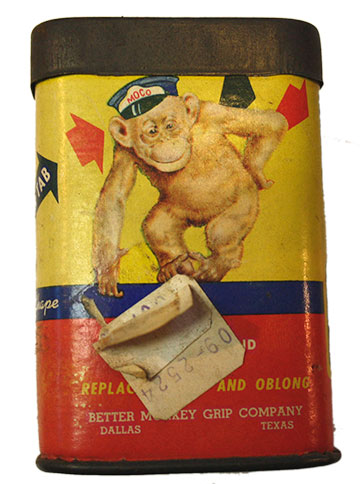 Shortly afterwards, a “hot patch” was developed by another American company. This type of patch was vulcanized by igniting a built-in fuel pan and a tube repair could be completed in about 10 minutes. This was followed by a further development, which used a fuel pan that could be ignited by a cigarette. That particular company named its patches Camels, Lucky Strike, and Chesterfield, after the well-known cigarette brands of the time.”

Now, that doesn’t sound to me like R.J. Reynolds Tobacco, who’s been making Camel cigarettes since 1913, was the manufacturer of Camel Vulcanizing Patches. But the graphics on Carol’s can certainly evoke images of Camel cigarettes. 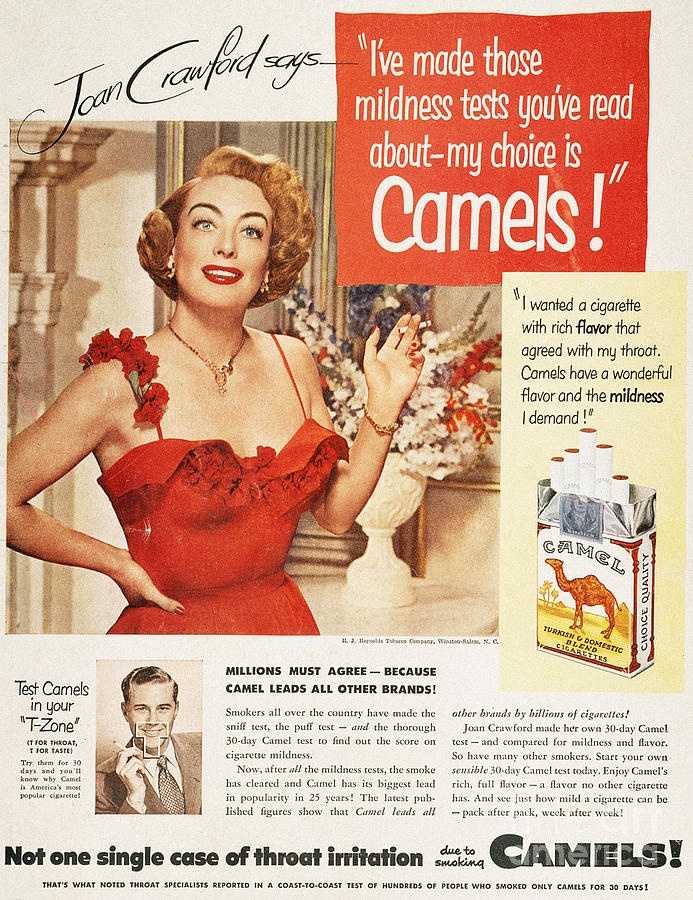 You can see from this old ad (note the “not one single case of throat irritation” claim) that the camel is facing the opposite way and the typestyle is slightly different, but the graphic, curved headline type, and subtitle placement are certainly similar enough to be confused. The patches were made by the H.B. Egan and Camel Tire Care Co. and the first can with the camel image was trademarked in 1925, well after the Camel cigarette graphic was in use. Was this a result of lax trademark laws in the early years? Or did R.J. Reynolds give the okay to use similar graphics since it promoted the use of Camel cigarettes to light up the vulcanizing process? My quick web search led to a dead-end, but if you like a good mystery and have a little time on your hands, it’s an interesting question for trademark history. And you might just find there’s monkey business involved.