Why are my clothes sticking together or to me and is there a natural way to make them stop?

You’ve probably heard by now that conventional dryer sheets that work to remove static cling from your clothes contain some of the most toxic chemicals of any household products. And those anti-cling aerosol cans are full of nasty chemicals that can nearly drive you out of the room with their odors. But you don’t want to go to town with your skirt sticking to your tights, either. We’ve probably all had an embarrassing moment or two with that scenario. One time when I was flying out of the Spokane airport, I stood in a line of people waiting to talk to an airline clerk with my back to a large lobby. After quite a long wait, a woman came up to me and whispered in my ear, “Honey, I know I’d want someone to tell me this—your dress is hitched up to your panties.” {Funny how I never noticed just how large that lobby was.}

So what’s a natural-living farmgirl to do?

First, a little about electricity. When you think of electricity, you probably first think of the kind you get when you plug something in. That’s called “current electricity,” electricity that travels from a power source down a metal wire. It’s always on the move, carrying electricity from one point to another. “Static electricity,” on the other hand, is electricity that builds up in one place. Lightning is the most spectacular example of static electricity. {In the early ’70s, when I worked as a fire lookout in the Idaho wilderness, I was sitting on my little lookout stool with glass feet in the tower, nearly 100 feet in the air, during a lightning storm, when all of a sudden, my waist-length hair started dancing all around my head, cartoon-like. Startling, to say the least. The next day, a man from the main Forest Service office stopped by to check the grounding wires on my metal tower. Yikes!}

photo by Christophe.Finot via Wikimedia Commons

Static electricity can also be produced by rubbing two things together, like rubbing a balloon on your shirt to make it stick. But it’s not really the rubbing that generates the static electricity, it’s that we’re bringing two different materials together over and over, like in a clothes dryer. According to Reference.com, “Different fabrics exchange electrons as they rub against each other in the dryer. Some clothes become positively charged and others become negatively charged. These opposite static charges cause the clothes to stick together and produce crackling sparks when pulled apart.” Static electricity does do more than just stick our clothes together. Printers and copiers use it to build up ink on their drums, for one. But why do our clothes seem to stick together more in colder weather and what can we do to un-stick them?

Static cling is more prevalent in colder weather because cold air holds less moisture than warm air, allowing static electricity to build up instead of dissipate. According to TheWeatherNetwork.com, “When a furnace draws some of that frigid air inside and heats it up, the dew point doesn’t rise with it, unless your furnace also includes a humidifier to add more moisture to the air. Inside, it can become as dry as a desert, making the air about as resistant to the movement of electrons as it can get.”

So, now we know why we get static cling. But how do we deal with it naturally? 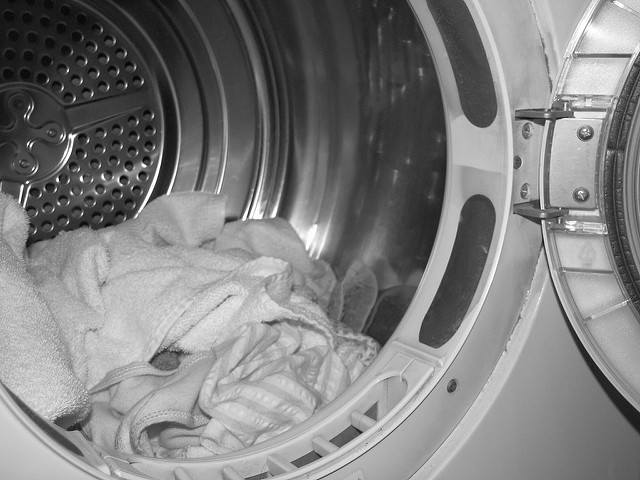 photo by Stephanie via Flickr.com

Here are a few tricks to try.

Do you have a method you use that I didn’t think of?