For this week’s Stitching and Crafting/All Buttoned Up Beginner Level Young Cultivator Merit Badge, Nora and I were all about the buttons.

Anyway, we did this badge in spite of the fact that I held a bit of grudge against the little things. You see, my Gramma Barbie loved her button collections. Loved them so much she stored them in cleverly disguised tins that once held cookies.

Good for her, but annoying for cookie-hungry grandchildren.

I’m just sayin,’ Grams, you could have kept them in Brussels-sprouts tins or something less tantalizing.

But I swallowed the bitter disappointment of years gone by and Nora and I got to collecting. She’s all about collecting, that girl. She’s got a collection for just about you can name: stamps, spoons, rocks, paper dolls, temporary tattoos, bookmarks, pens and pencils, snack food, stickers, stuffed animals, beads, belly button lint … okay, maybe I’m making that one up. She says it’s fairy cotton balls. I remain skeptical.

Finding a few to start her collection was easy enough. First, her dad submitted a shirt for the cause: it was stained and a bit ragged so we salvaged the buttons off with a sharp pair of scissors. That gave us several nice enough buttons to line the bottom of our cookie tin with (tradition, you know). After that, we went yard sale-ing, and sure ‘nuff, found a mason jar of mismatched and intriguing buttons for less than a dollar. She had a blast sorting through those (and found more to add to her fairy cotton-ball collection, to boot). Also, a bit of loose change and some safety pins. I nearly rummaged around myself in case of a spare copy of the Declaration of Independence or something at that point, but we had to stay focused.

Of course, you can just go to the craft and sewing supply store and buy a few buttons to start your collection, but where’s the fun in that?

Nora, being Nora, had to line them all up, in order. First order was by color, from the blues to the greens to the aquamarines. Then she mixed them back up and arranged them by size, smallest to largest. Then she settled on her own personal organization system: favorites. From left to right, from most favorite (a shiny heart-shaped button in pale pink) to her least favorite (a plain, black round one). 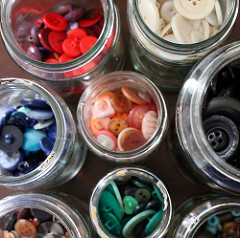 photo by stitchlily via Flickr.com

But then she felt bad. After all, at this point, they were like her mini children. You can’t arrange your children by favorites! It’s frowned upon in most circles, even the 8-year-old Button Mama circles. Which is totes a thing. So she scooped them up and poured them back into the cookie tin, letting them run through her fingers first.

Because there’s not much more of a better tactile, hands-on, experience than sifting through buttons.