The adorable, always humorous MBA Jane is my way of honoring our Sisterhood Merit Badge program, now with 7,504 dues-paying members who have earned an amazing number of merit badges so far—10,886 total! Take it away, MBA Jane!!! ~MaryJane

For this week’s Make It Easy/Do Your Eyes Light Up? Young Cultivator Merit Badge, I took advantage of my little helper-around-the-house extraordinaire, Nora. And by take advantage of, I mean taught a valuable life lesson.

What? You think I have an ulterior motive in my offer to babysit the little squirt? So cynical, dear reader! I would never!

Okay, maybe I would just a little. You see, I had misplaced my umpteenth tool for the last time. There’s never a hammer around when I need one, I haven’t seen my good flathead screwdriver since the summer of ’99, and when it comes to pliers … well, I know they’re around here someplace.

Nora loves a good organization project, and she was old enough now to teach the basics of a good toolbox. After all, she’d be in shop class soon enough, building crooked birdhouses, sawing off fingers 2X4s, building benches that list to one side … Sunrise, sunset. *nostalgic sniffle* 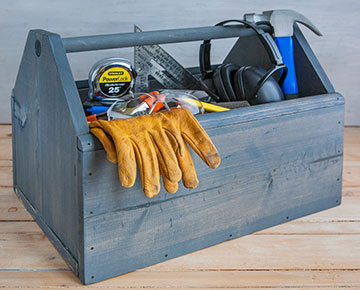 Anyway, we had an afternoon to spend and I was in desperate need of my measuring tape. Total coincidence, I assure you. First, lovingly instruct the kiddo. If we find the missing measuring tape, just a happy accident. Ahem.

First, we organized what we could find. My toolbox was frightfully embarrassing, I don’t mind telling you. I mean, it made my junk drawer in the kitchen look posh and well-thought out. There was a spilled bag of zip-ties sprinkled throughout, bent nails, broken and busted halves of things, a couple dried up paintbrushes, a butter knife (don’t ask), and some dead flies. I bear no responsibility for those guys, though.

But alas, no measuring tape or my good flathead screwdriver. The mystery deepened and the plot thickened, kind of like a Thanksgiving gravy but less lumpy.

Part of earning her badge was to learn the names of said tools, but she already knew quite a few. This led to her shouting around the house with a wrench,

It was Professor Plum in the kitchen!

Sometimes it’s difficult to get the little whippersnapper to focus. We ate a snack to feed our brains and tummies and got back to work.

After cleaning out the toolbox (Nora insisted on affixing some glitter stickers to the outside), we arranged the tools back inside in a much less haphazard way than we had found them. We also had a small, but respectful, funeral and eulogy for the flies. Nora prepared a lovely speech and we sang a few hymns. We figured that was the least we could do since they were getting the rather undignified disposal of joining the dustbin debris.

We were still missing the aforementioned tools and I was starting to panic over the lack of a decent hammer in my life. I’ve pounded small nails in my walls with a shoe one too many times to find it clever and/or cute. Also, it’s hard on the shoes.

So, off we went on an excursion to the garage. You know, the dimly lit room where perfectly good tools go to die. Or at least become missing in action. Seriously! In action! Like right in the middle of popping open a tin of paint in ’99 and wham, bam, thank you ma’am, my flathead screwdriver disappeared without a trace.

I don’t feel like Dateline or Law and Order takes seriously enough the millions of missing tools around the world.

(Don’t even get me started on socks.)

After about an hour, we found one MIA tool. As Nora exclaimed as she held it high in triumph,

It was Aunty Jane in the garage with the hammer!