We listened to Patsy Cline, drank Diamond Fizzes, and raised tens of thousands of dollars for our sweet little school! The center was filled with cowboy hats, boots, and rhinestones… 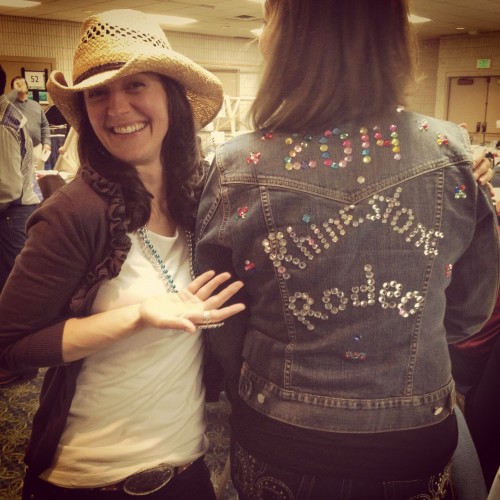 The evening went much too fast, but a glimpse of the décor … 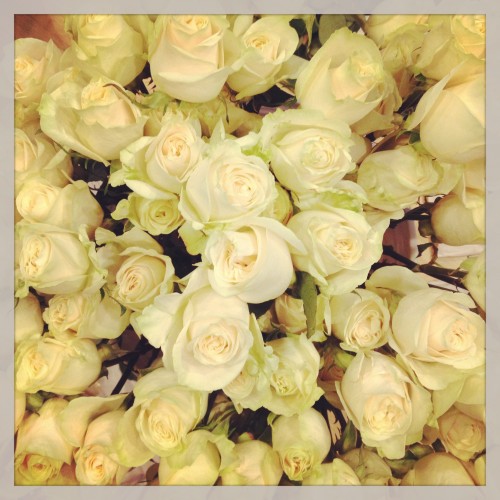 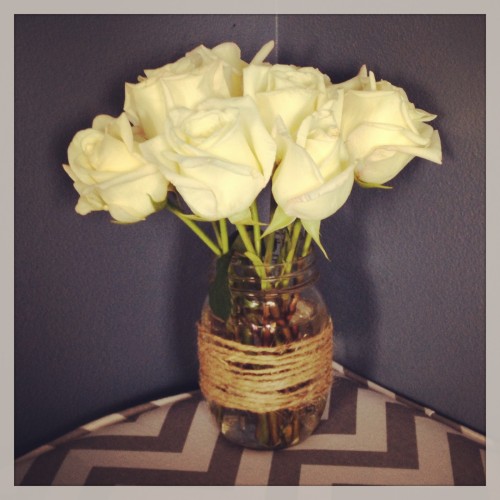 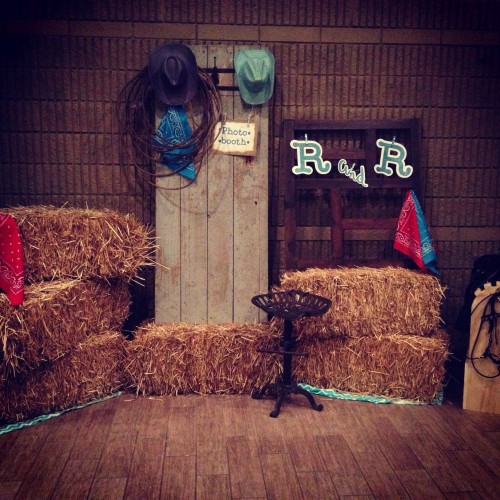 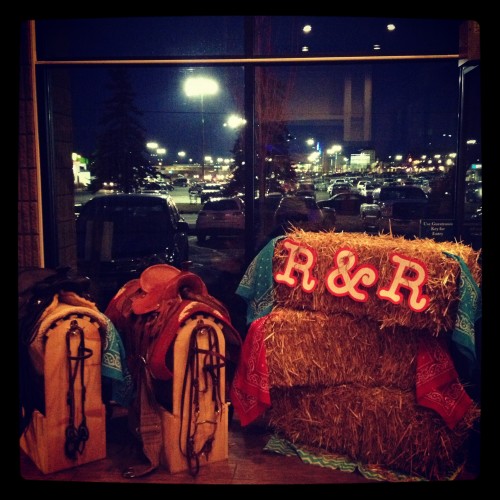 Our crew was there at 8:00 am sharp and didn’t clear out until we packed up the whole event at 10:30 pm. Somehow, when working with people you love for something you love, a day of hard work feels pretty good! 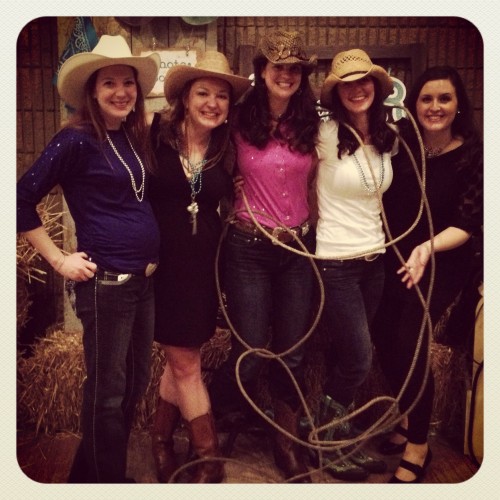 Vote for Your Favorite Cover of the Next Issue of MaryJanesFarm

Lend us a hand by voting on your favorite cover for the April/May 2014 issue of MaryJanesFarm! 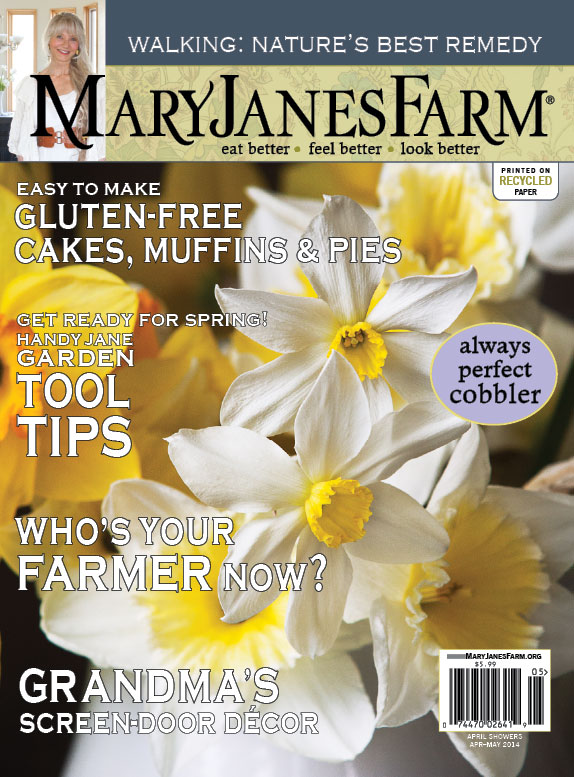 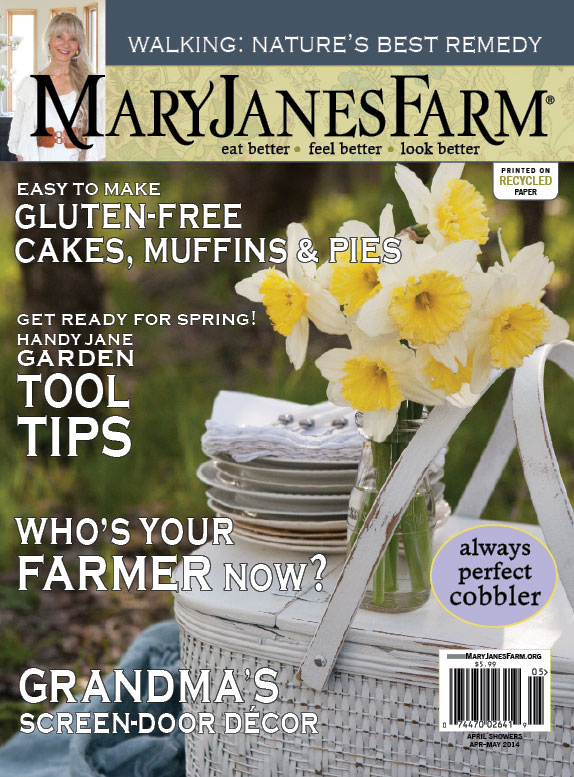 Leave your vote in the comments. Thanks!!!!!

Ahhh, the Sounds of a Cricut

As I mentioned last week, I’m getting crafty for a good cause. Stella’s annual school auction is on the horizon, and well, you know my love for party decorating, so I couldn’t be happier to assist. Especially when that means I get to sit down with a cup of tea and get this thing chirping! 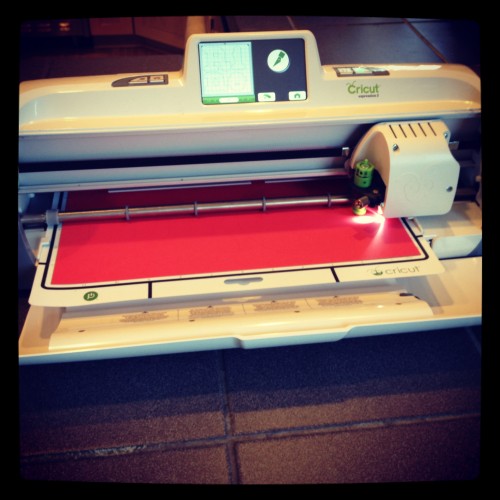 If you haven’t used a Cricut before, it pretty much cuts paper in any shape, size, letter, or design you want it to. If you have used a Cricut, you know what I’m saying about the little noise it makes while it cuts and shifts the paper back and forth. Makes me smile.

But as I craft away for our Rhinestone Rodeo Auction, this next picture might be most descriptive. 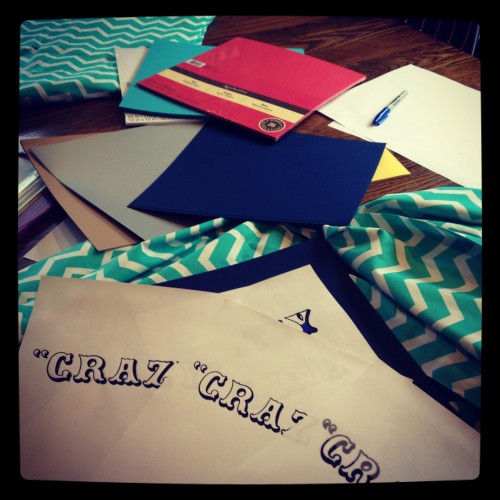 As I pick color schemes and songs (Patsy Cline, in this case) to name the silent auction tables, I’d say this one is particularly fitting today!

The Raindrop Mason Bee House Kit is a simple starter hive that will have you buzzing for joy.

Just look at it—a lovely bit of apiarist architecture, is it not? 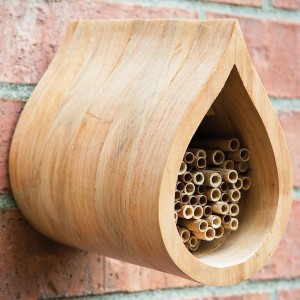 This elegant raindrop-shaped pine hive is designed and carefully handcrafted by a team of Ixil carpenters (indigenous Mayan people) living near Nebaj, Guatemala. The hive holds about 100 tubes or reeds that are protected from rainfall and moisture accumulation.

What’s more, all profits are donated to the Agros International training center, which helps rural families in Latin America escape the cycle of generational poverty and participates in local Guatemalan reforestation efforts.

Buy your hive at www.crownbees.com, where you can also find advice, mason bees, and other supplies for launching your hive.

Here’s a nifty video packed with info about the raindrop hive:

Our latest addition, Charlie, loves to chase our chickens. (I think they secretly like it.) I might add, I’ve never had such a playful calf. He’s constantly on the go.

First he stalks them, moving only inches at a time—the two girls are just walking along, visiting about the latest American Idol winner—when … 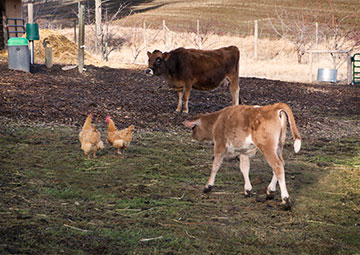 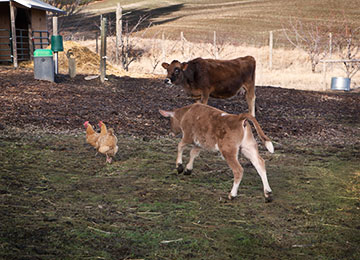 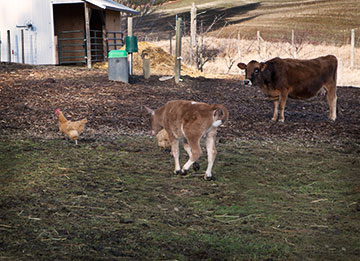 “Run for your life.” 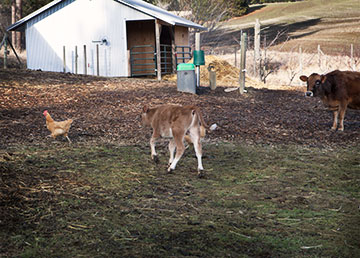 When Stella’s school asked if I’d head their décor committee for their annual fundraising auction, I was tickled pink. Decorate, merely DECORATE, for a party and not have to do all the other party logistics? Sign me up!

Soon after, I scored this awesome pile of … 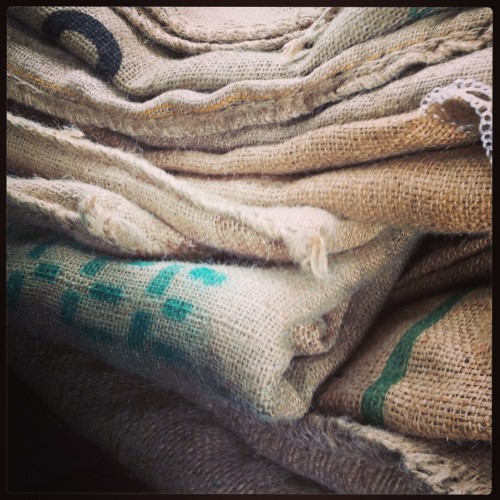 burlap sacks. This photo doesn’t do this score justice—two dozen humongous burlap coffee bean bags. The super-cool part is they have all kinds of funky-looking logos from Brazil and Guatemala and all the other fabulous places where coffee beans are grown. So of course I plan to use quite a few of them to decorate for our upcoming auction.

I have so many, I get to use some for home décor also. I have a few ideas up my sleeve, but I’d love some suggestions … ???  Too-much-burlap is kind of a dreamy “problem” for a farmgirl to have, wouldn’t you agree?

Gwen Stefani, the fab former frontwoman of the band No Doubt, is forging a fashion partnership with 7 for All Mankind to create a line of eco-friendly “elevated basics” (plain speak: outfits) made with Tencel, a biodegradable fabric composed of wood-pulp cellulose. 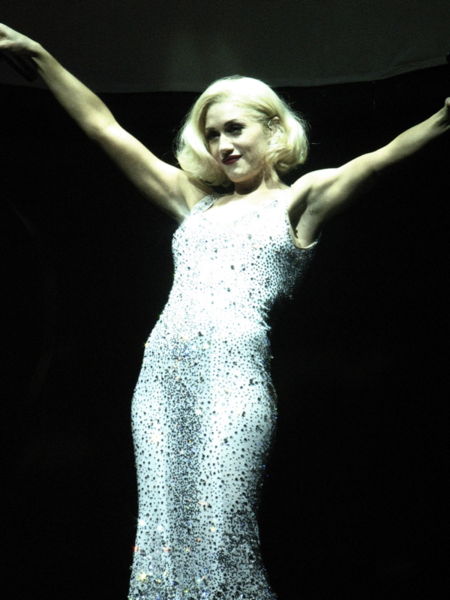 Photo by jelizen via Wikimedia Commons

The “how” is really beyond me at this point, but the seemingly space-age technique must be happening right NOW because Gwen’s 18-piece DWP (Design with Purpose) collection will be released this spring.

“What’s so great about DWP for me is it’s different from anything I’ve ever done, working in L.A. and having the factory right here,” Stefani told The Hollywood Reporter. “The actual designs are very simple because it’s all about everyday wear. So that’s different and new.” 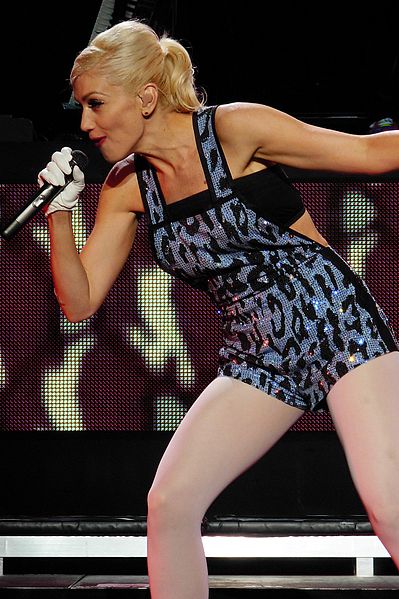 Photo by Notxmyidea via Wikimedia Commons

They say a photo speaks a thousand words … 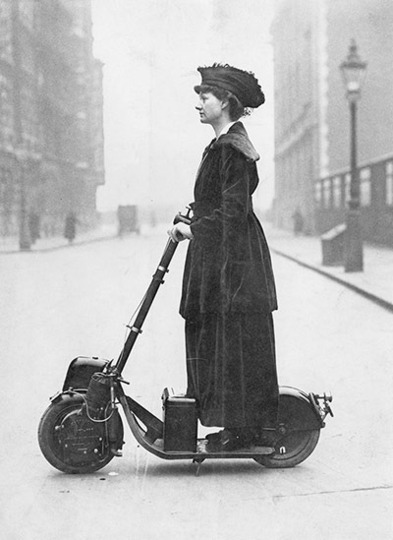 Well, alright, I’ll add a tidbit of explanation, as given by one G.D. Falksen on Goodreads: “Lady Florence Norman, a suffragette, on her motor-scooter in 1916, travelling to work at offices in London where she was a supervisor. The scooter was a birthday present from her husband, the journalist and Liberal politician Sir Henry Norman.”

Keepers of bees, lend an ear …

I stumbled upon a curious old custom:

The Telling of the Bees.

Ever heard of it?

It’s new to me, but its roots can be traced deep into the lore of 19th century England and followed to the shores of America on the ships of early immigrants.

“Telling the bees” referred to a tradition of humans informing hive residents about important events in their keepers’ lives, such as births, marriages, or notable comings and goings of the household. Perhaps recalling the events of the year at the start of a new year? 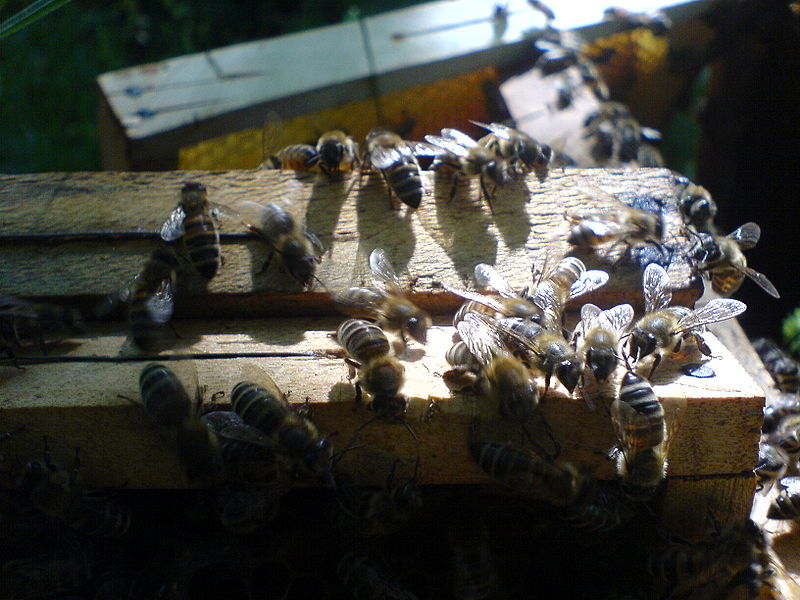 Photo by Pokrajac via Wikimedia Commons

Most importantly, though, people believed that bees must be told of their keepers’ deaths. If left out of the loop, the bees might abandon their hives, halt honey production, or even die themselves.

So, how would one announce such news to an apiary?

If the keeper had information to share, she might rap gently upon the hive and murmur softly to her bees. A bit of lace and slice of cake might be left to include the bees in a wedding celebration.

But if the sad news of a keeper’s passing was in order, the bearer was inclined to drape a hive in black cloth while humming a “doleful tune,” according to New England Legends and Folk Lore by Samuel Adams Drake. Funeral food and wine would be “shared” with the bees, and an invitation to the funeral tacked to the hive. In some cases, the hive might even be rotated to face the funeral procession. It was considered critical that these valuable members of a household not be neglected. 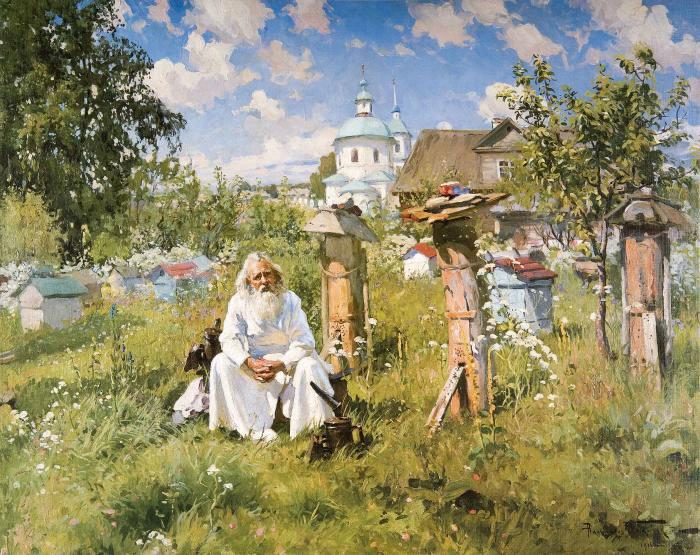 On an Apiary by Aleksandr Makovsky via Wikimedia Commons

In 1858, American Quaker poet John Greenleaf Whittier published “Telling the Bees” in the Atlantic Monthly. In his introductory note, he wrote, “A remarkable custom, brought from the Old Country, formerly prevailed in the rural districts of New England. On the death of a member of the family, the bees were at once informed of the event, and their hives dressed in mourning. This ceremonial was supposed to be necessary to prevent the swarms from leaving their hives and seeking a new home.”

Here are a few stanzas from Whittier’s touching poem:

Just the same as a month before,—

The house and the trees,

The barn’s brown gable, the vine by the door,—

Nothing changed but the hives of bees.

Before them, under the garden wall,

Draping each hive with a shred of black.

Trembling, I listened: the summer sun

Had the chill of snow;

For I knew she was telling the bees of one

Gone on the journey we all must go.

And the song she was singing ever since

In my ear sounds on:—

Mistress Mary is dead and gone!” 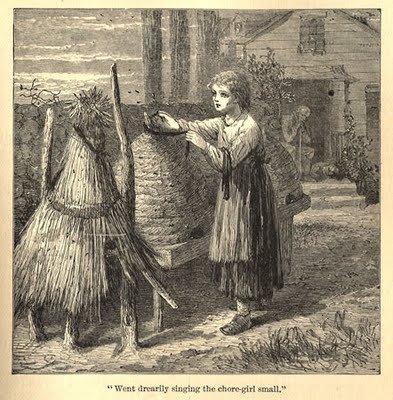 As I was buzzing about the Internet, I also found an English folk band called Telling the Bees. This captivating album cover was created by artist Rima Staines: 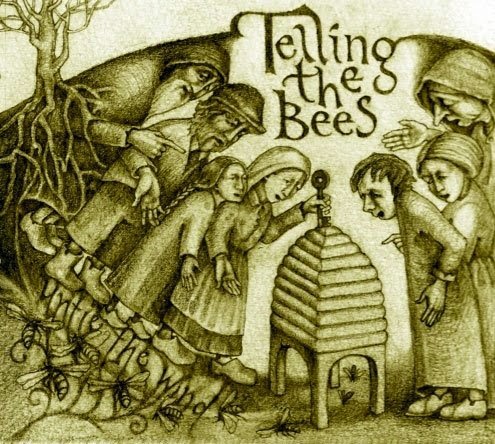 For more beguiling bee lore, I suggest Bees in America: How the Honey Bee Shaped a Nation by Tammy Horn. 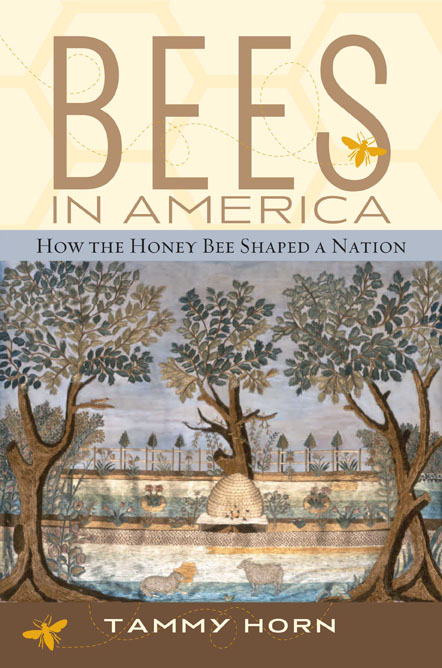