I picked my grandgirl, Mia Marie, up from school last week for “Mia’s Day.”

Mia’s Day is all about farmgirl chores. First, she and I milked the cow and I taught her how to use her own hands to extract milk. Then we processed the milk. After that, we headed to the greenhouse for some watering and weeding (and nibbling). Then we had a late lunch. And frozen blueberries. And tea. And finally, story time.

The best part of the day for me happened early on, when I picked her up from school and she surprised me with a couple of handmade gifts. The night before, she’d made a card for me and embroidered a new dishtowel for my kitchen. 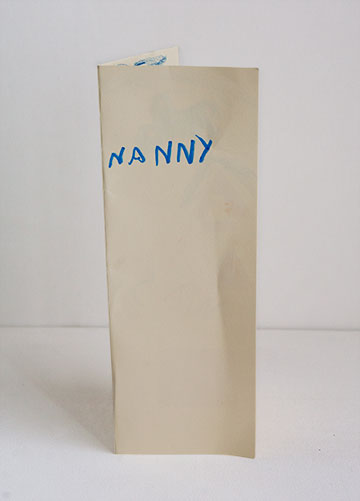 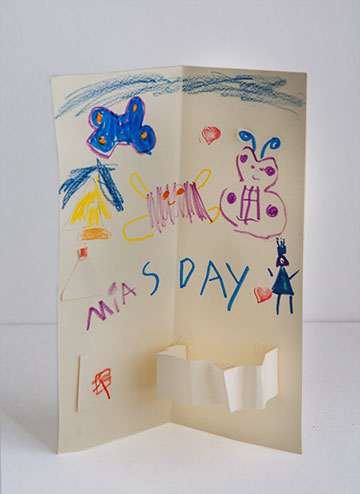 A present for me … 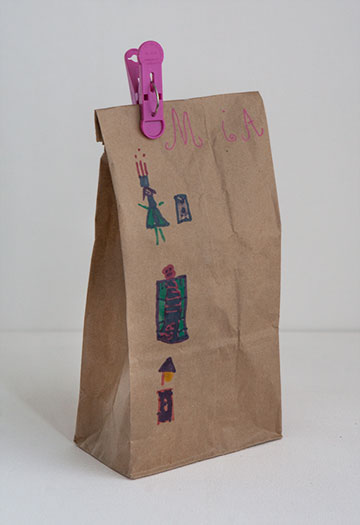 And inside? Why, a horse, of course! 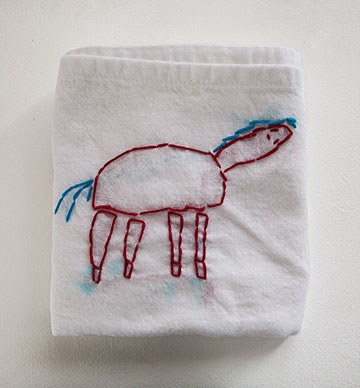 While visiting one of my favorite haunts last week, I got to thinking. Do other farmgirls have a “building recycler” where they live?

A quick Google search told me, yes, they’re popping up all over the country. 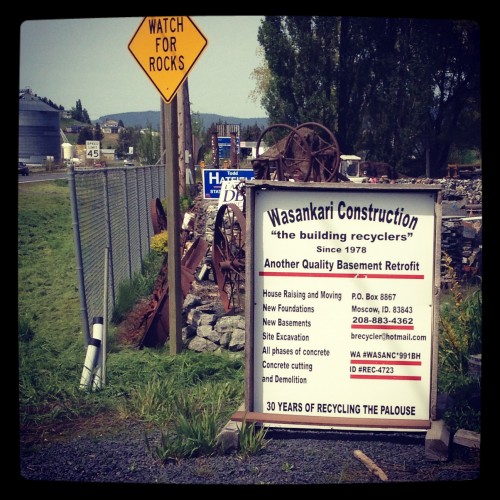 Ours has been around ever since I was a toddler. 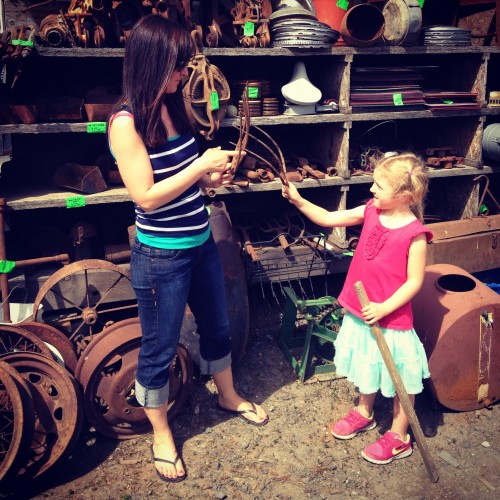 Mia and I love to go there for treasure hunts. You know those fun, funky projects you’ve had your sights on forever? Well, look no further than your local building recycler.

I found a few treasures on our last foray there (Mia found a good walking stick). I can’t wait to share some of the projects I’m working on once I get them finished—everything from salvaged barn wood, to windows, piles of springs in all sizes, toilets, marble slabs, fabulous old doors, and claw-foot bathtubs (sssshhh, don’t tell Mom I’m sharing that info—I do believe she’s purchased a total of ELEVEN!!!! claw foot bathtubs over the years from our local building recycler).

Hubby and I scored the door below (that we turned into corner shelves), painted, and distressed. We actually built two of them. Check out their website! 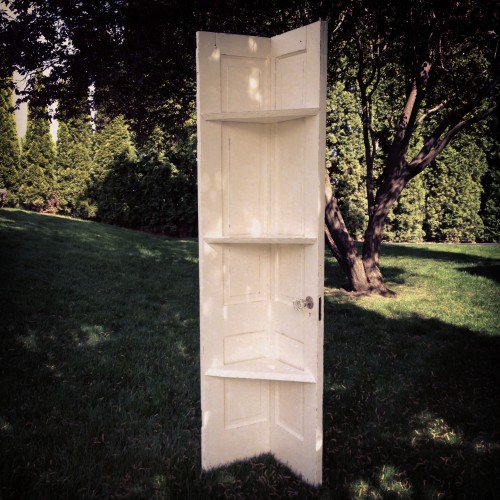 After I returned from my virtual vacation “visiting” Wendy Houses, I was wandering the Web and found myself way out on the desolate, windy plains of Manitoba—off the beaten path by miles, I know—where I discovered a delightful domicile designed for all of us who have entertained dollhouse dreams long past the days of youth … 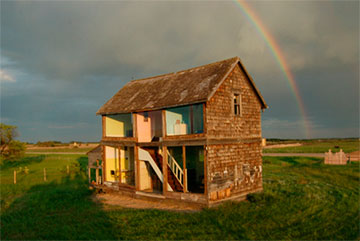 And, yes, doll face, it was scaled for grown-up girls like you and me!

The dollhouse was the brainchild of Canadian artist Heather Benning, who spotted the ramshackle residence in 2005 while completing an artist-in-residence program in Redvers, Saskatchewan. Rather than photograph the abandoned farmhouse, capturing the sunlight on its aged timbers the way many an artist would, Heather was struck by an entirely different inspiration. 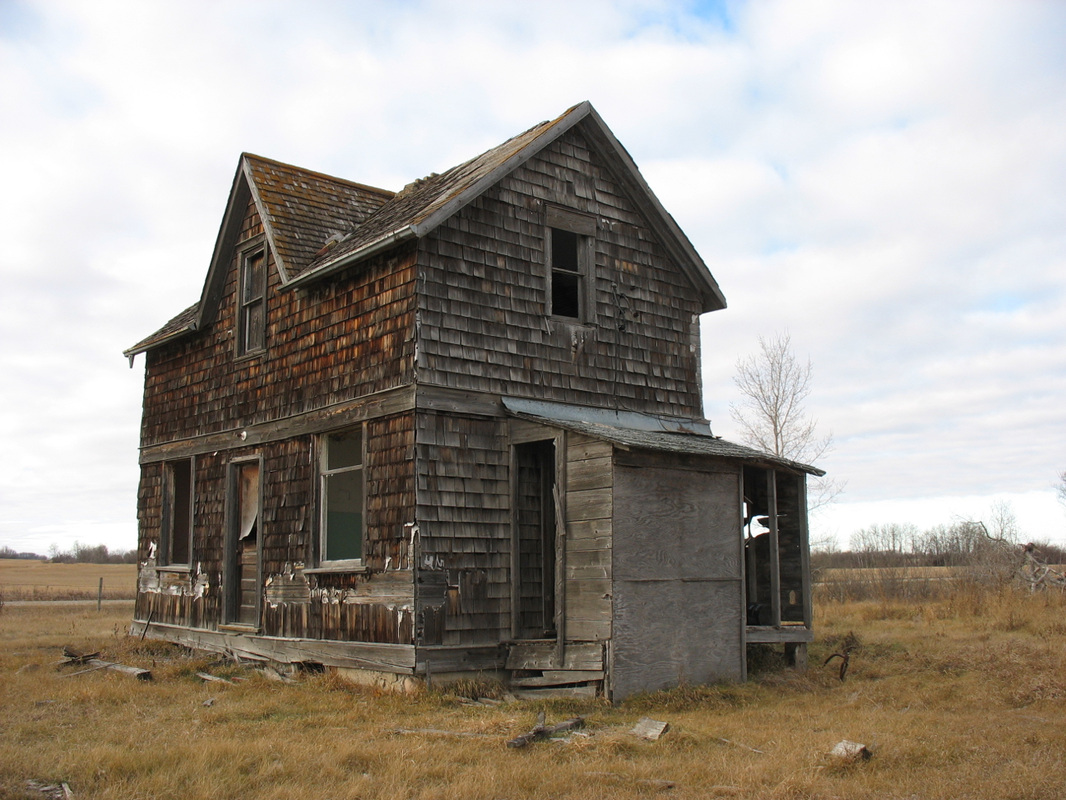 Photo of the dollhouse prior to restoration courtesy of HeatherBenning.ca

She tracked down the owners of the property, who told her that the house had been empty since the late 1960s and was in pretty sad shape. After hearing her proposal, though, the owners donated the house to Heather so she could doll it up for a unique artistic exhibition.

“For over 18 months, I re-shingled the roof with recycled shingles and restored and furnished the house to the era the house was abandoned,” Heather explains. “I then removed the north-facing wall and replaced it with plexiglass. The house was officially opened to the public on June 9, 2007.” 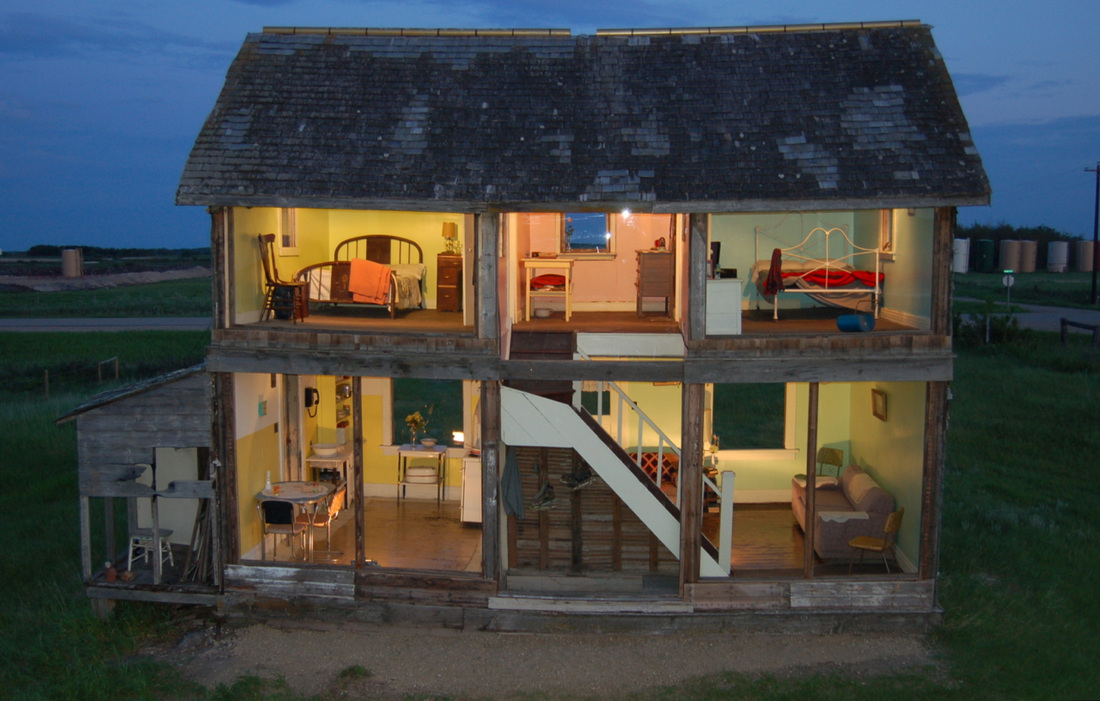 “I chose to close the house in with plexiglass because I wanted it to be inaccessible and tomb-like—inaccessible in that one cannot enter a real dollhouse because of the scale, and tomb-like because it encapsulates a time and a lifestyle that no longer exists, and will never exist again,” she said.

Alas, we can’t hope to make a pilgrimage to the house in person because it no longer exists …

“In October of 2012, the house began to show its age—the foundation was compromised,” Heather says on her website. “The house was only meant to stand as long as it remained safe. In March of 2013, ‘The Dollhouse’ met it’s death with fire.” 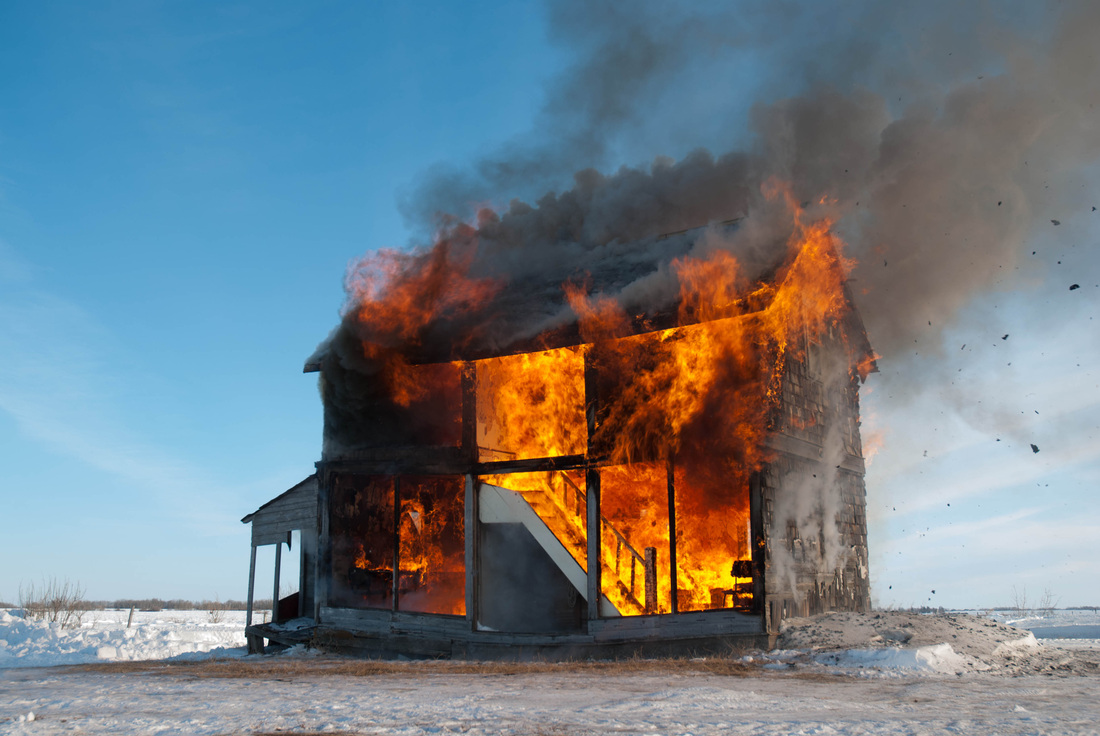 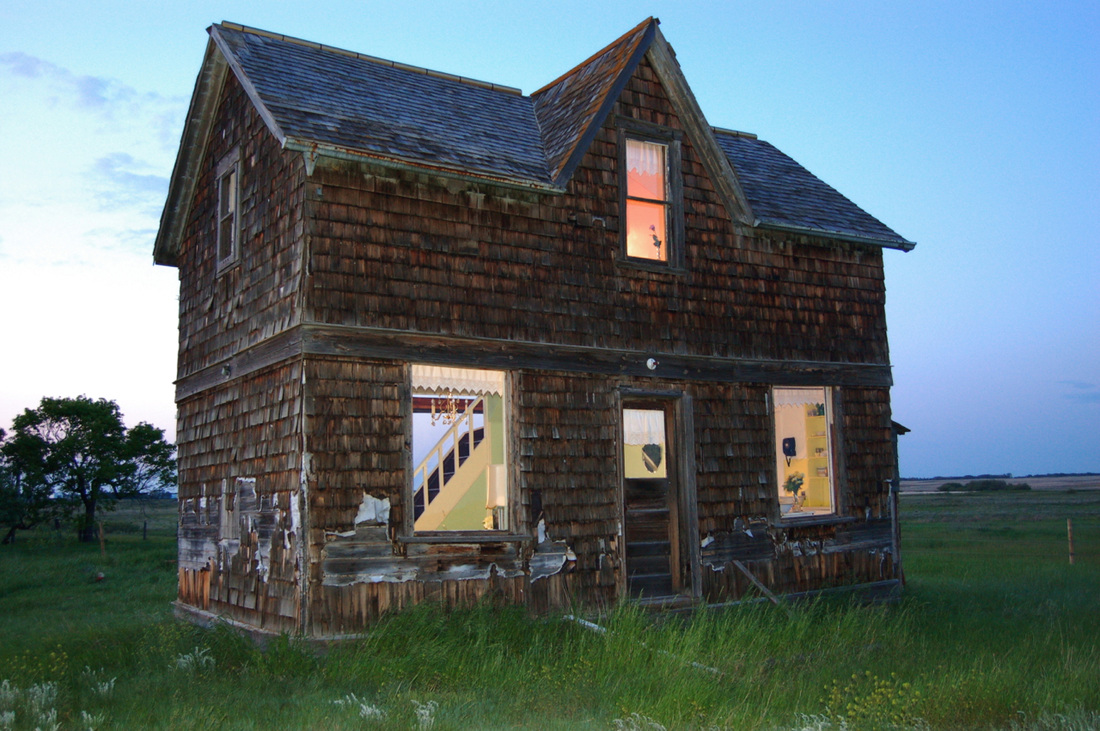 Doesn’t it make you want to round up the little Janes in your life and design a dwelling for dolls? Even if we can’t live it it, we can always dream!

Something like a century ago (okay, 40 years, but back then THIS stage of my life seemed like a century removed), I spent two summers on a fire watch tower scanning the horizon for forest fires. I still have my binoculars, so during our farmgirl slumber party last weekend, I taught my grandgirls how to use them. They were enthralled and spent hours “glassing” the world beyond what the naked eye can see. 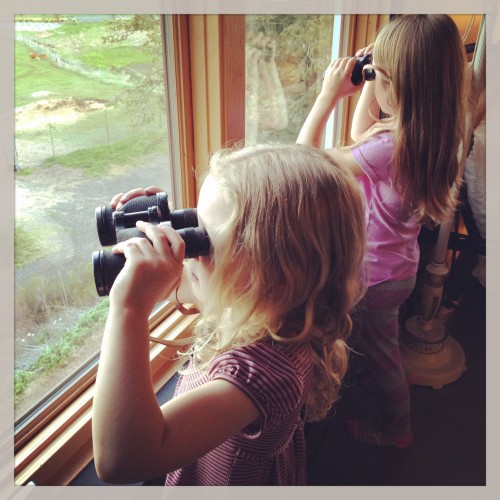 Is it any wonder I perched my office on the tippy top 4th floor of our facility so I could continue to see forever? (It’s a serious addiction once you’ve indulged.) See my cows in the distance? You know, some people watch hummingbirds; I observe cow behavior. I spy!!!! I do. Fires? None yet:)

My tower was 100 feet tall so I made fast friends with the fact that HAVING to go up and down stairs many times a day keeps heart surgeons at bay. You could say that each and every time I snoop, I’ve earned it. I climb up and down our stairs about 30 times a day.

Can’t take my eyes off of you …

Rose Etta loves Beaumont so much. 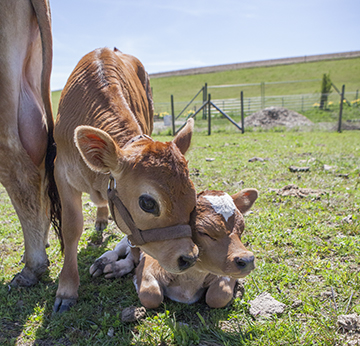 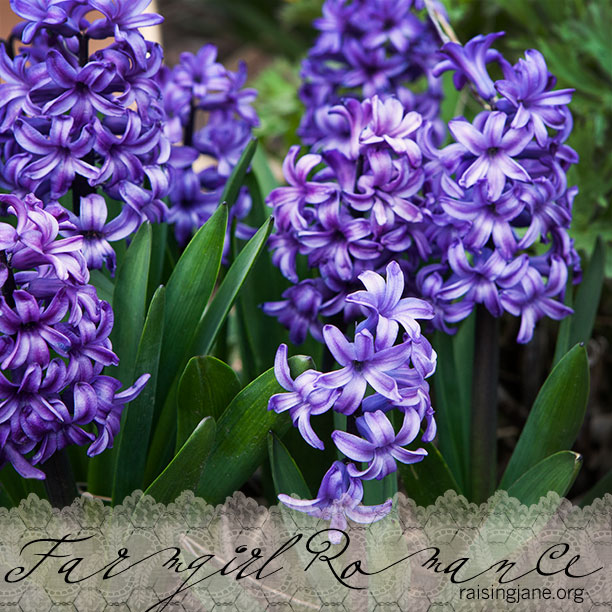