All You Need Is Love

In 2002, we shared a story from the Atlantic Monthly called “How the Terrorists Stopped Terrorism.” The story of how these extremists were changed by giving them something to live for instead of die for is food for thought. Read the story here. 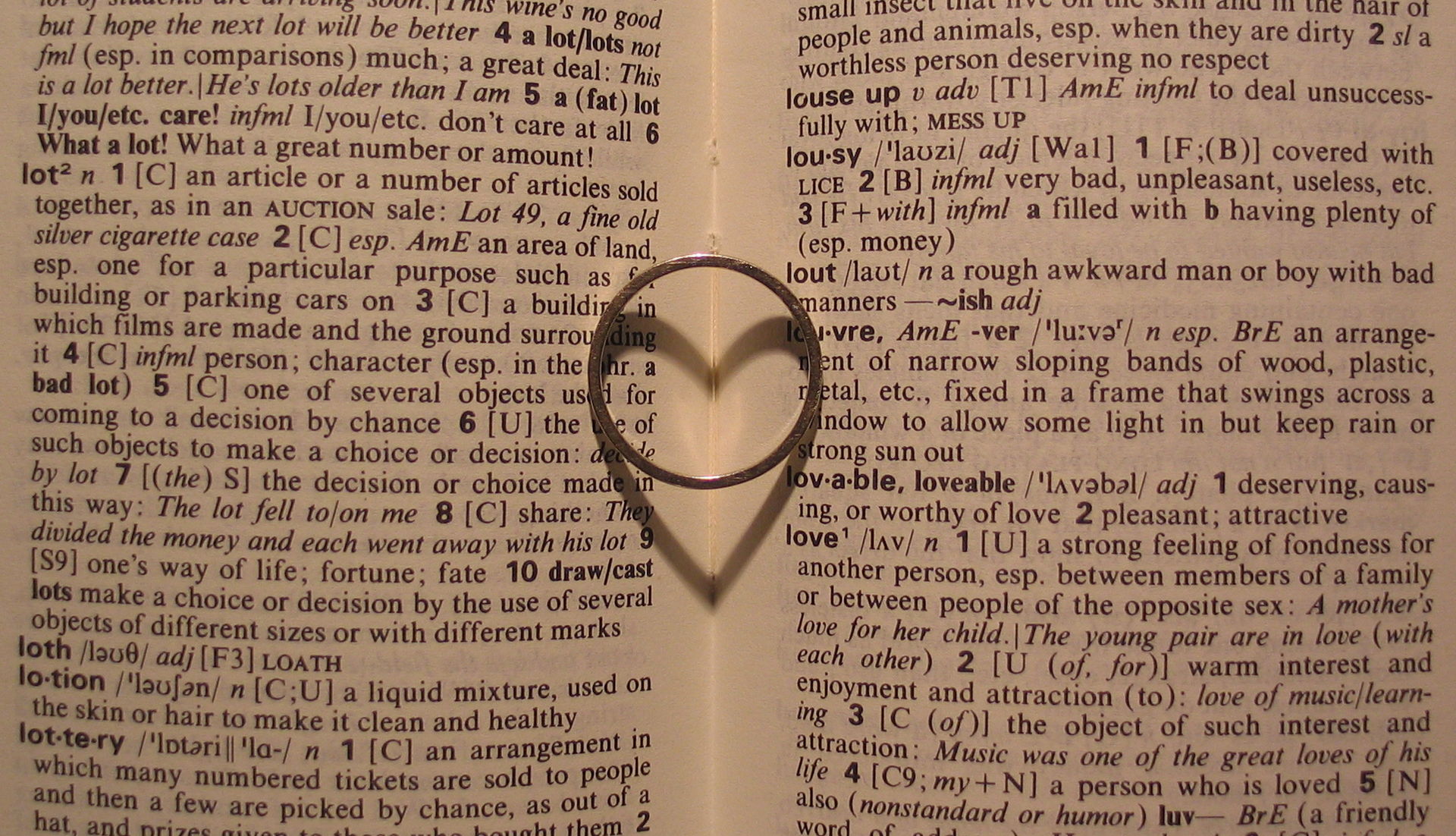 What my couch really looks like in the midst of pool dates, camping trips, craft projects, and bike rides this summer. 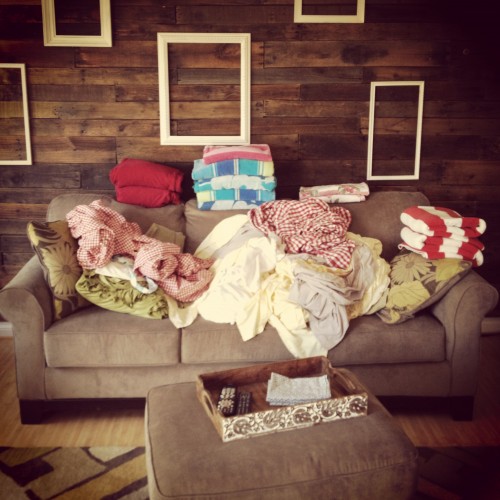 Maybe when I finally take some time to sit down, I’ll get it all folded and put away. Where do you sort and fold your laundry?

Is it just me or do you get excited when you finally buy that new purse you’ve been wanting? You know the feeling, right? You can’t wait to get home and organize all of your belongings in all the fun new pockets and throw out the smashed granola bars and the business cards of people you’ve since forgotten and post-its that are total gibberish. Whose phone number is this anyway? 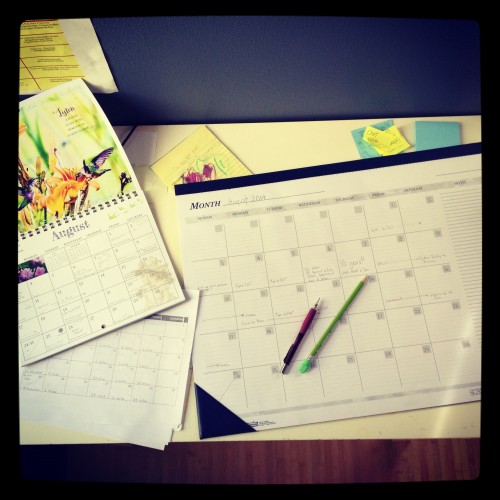 I’ve never owned one of those super-big calendars that have room for ALL of life’s details. In fact, I have a little one for work, one for personal, one for jogging, and a pile of random post-its of things worth remembering. Maybe most people use the uploadable sort these days, or their smart phone.

But I must say, I finally upgraded to a calendar that holds it all, and it feels just like a new purse. Or a whole new year! Look at all this clean space and open air for getting my life organized and just so. I mentioned it to a friend and she replied, “Wait until you have a new ‘dedicated calendar’ pencil!” Maybe someday I’ll get with it and keep a digital calendar. But for right now, mid-August, I’m enjoying this simple upgrade. (My oversized calendar pages are blank, so I still have 12 months to go.)

We loaded our campers and headed out—two weekends in a row. We always look forward to good eats around the campfire. 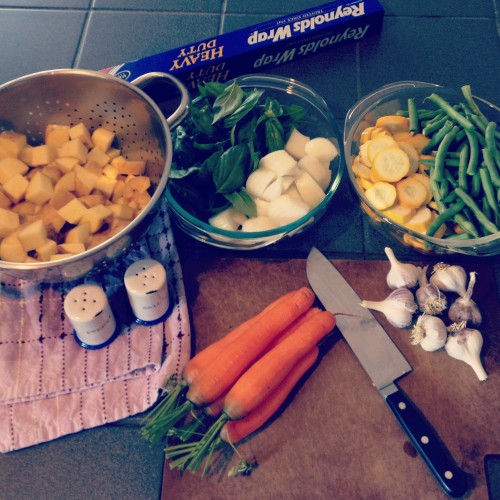 Add a pile of meat or maybe some salmon, a mound of veggies, plenty of butter, salt, and pepper, and wrap it all up in double foil. 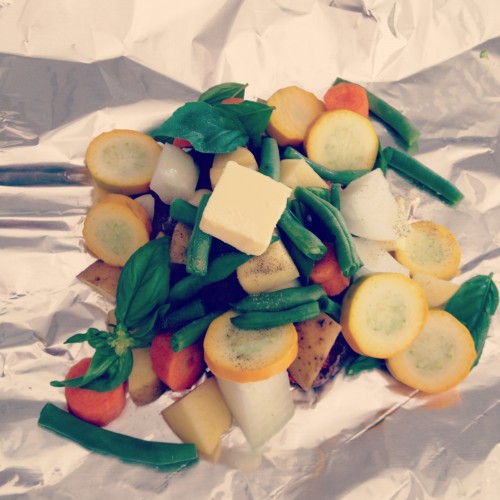 Ahhh, the sound of sizzling goodness.

We don’t have pictures of us enjoying our Hobo Dinners because it was too dark for photos, but perfect for a night around the campfire.

Stitchers, are you ready? Enjoy this tutorial for jazzing up your kitchen using my new Milk Cow Kitchen fabric by Moda available at the FatQuarterShop.com and MaryJanesFarm.org

It’s not every day that someone gets married. I mean, people get married every day, but for each individual, it doesn’t happen often. In fact, most hope it only happens once. Ten years ago last weekend, I got married. For some moments, I can recount the details as though it was yesterday. For other moments, it feels like another lifetime ago. ‘Tis the roller coaster that’s life, right?

There are, of course, a billion discussions on the topic of how to make it work, how to make it last, how to make it. Please bear with me while I get a little sentimental. As I got ready that day 10 years ago, I wanted to defy the statistics. I wanted to be right about what I was about to do. But it really is anybody’s guess. How can you really know someone that well to know you’ll be able to navigate life together for the rest of your life? You don’t know how life will change the one you’ve chosen, how they’ll handle curve balls. The odds are definitely against a couple who couple.

I don’t have ready answers for how to “make it work.” But I do know that 10 years ago, I was giddy. I couldn’t wait to walk down that aisle and whisper my handwritten vows. 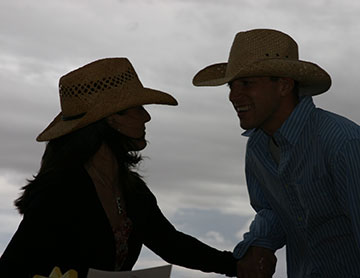 The excitement and joy I felt and the crystal-clear feeling I had that all was soooo right in the world turned into an effort to keep from crying. 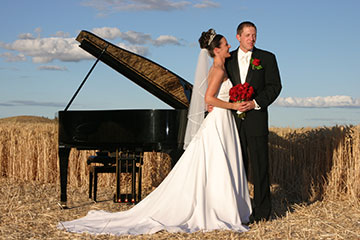 I mean, we were on top of the world, at the top of a wheat field, on the farm I grew up on. 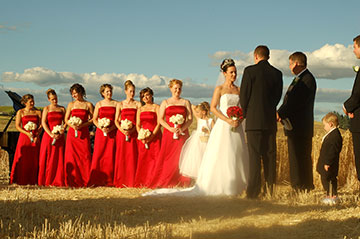 I felt pretty lucky about a lot that day.

And here we sit, 10 years later. A dear family friend took our two girls to the lake for the weekend. We contemplated for months all the marvelous places we’d go to celebrate being childless. Then we decided that one of the things we never get to do is be on vacation in our lovely little hometown. 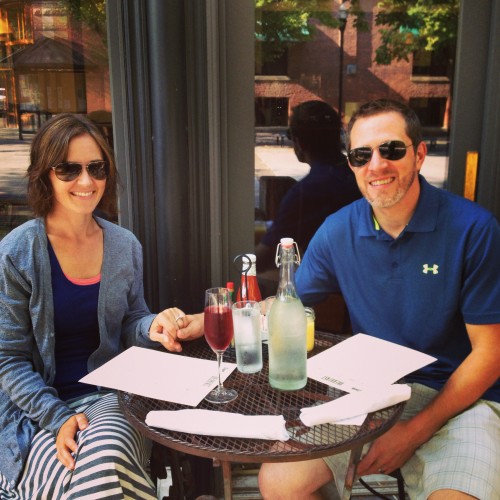 So… we stay-cationed it. We enjoyed our favorite dinners and frequented our fav breakfast nook. We even visited our little local bookstore hand-in-hand for his copy of the Sunday New York Times and my copy of a good beach-y summer read.

We took a few moments to remember that I am still loved and so is he. Rejuvenating, invigorating, inspiring, encouraging, to say the least.

I’m sure that someone who has accomplished 20, 30, or 40 years can say “Get ready for the long haul.” But I’d like to say that the first long haul that is 10 years has been worth it. And as long as most days, the pros outweigh the cons, celebrating a milestone with someone you love feels pretty awesome! I’m still feeling lucky and ready for the next long haul, especially if I get to share it with this guy. 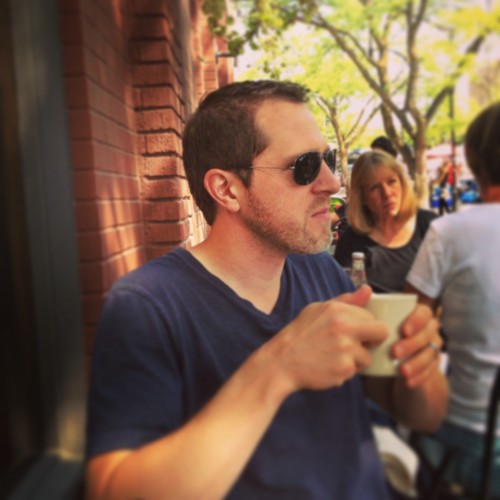 Pondering the prospect of a pet pig? 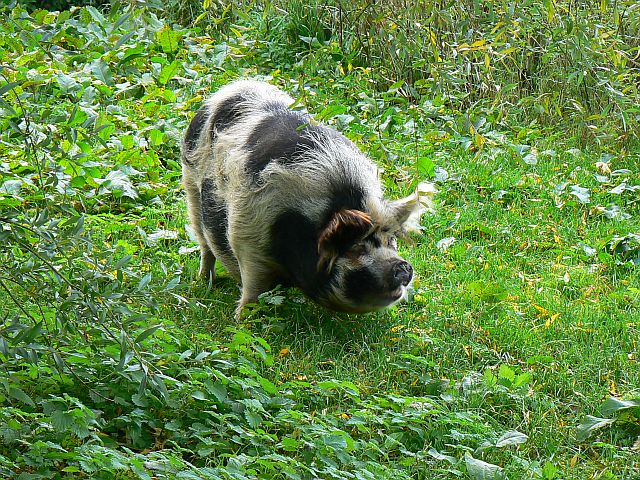 The Ross Mill Farm in Pennsylvania is dedicated to one purpose: the care and handling of pot-bellied pigs as (perfectly presentable) family pets.

“The Farm, originally established in 1740, is nestled in the rolling hills of Bucks Country, Pennsylvania, one hour north of Philadelphia,” explains the Ross Mill website. “Situated on 30 acres of pristine woods and streams, its historic fieldstone buildings and grounds have been carefully modified to provide the perfect environment for the care of pet pigs. The main farmhouse provides a place for piglets and youngsters to become socialized household companion pets. Outdoor facilities, the stone barn, and other buildings create the perfect environment to grow, learn, and express their natural social behavior.”

But the Farm doesn’t just pamper its own pigs. Owner Susan Magidson, also known as the Pet Pig Information and Consultation Specialist, provides guidance to prospective pig owners who can even come and stay at the guest cottage B&B for a bit of pet pig practice. 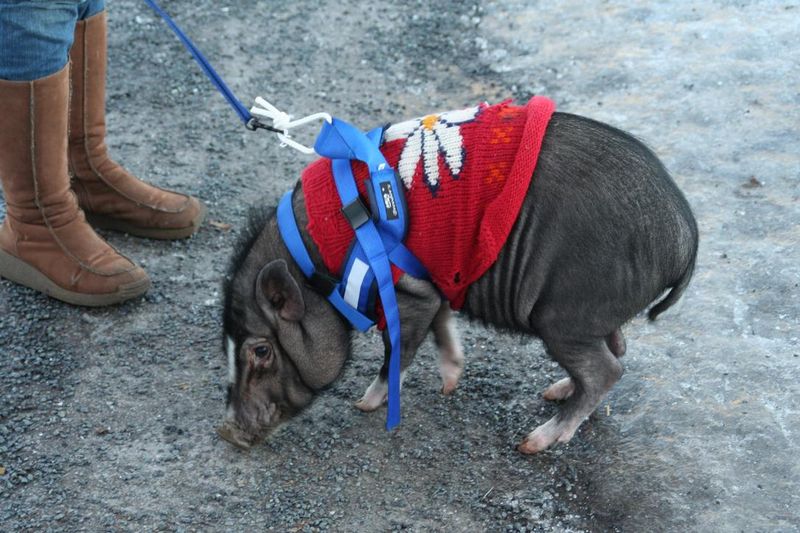 “Ross Mill Farm has everything a pig fancier could wish for, from boarding services to specially-formulated feed, and for those of us unable to keep our own pigs, a chance to mingle with them, and perhaps sponsor an orphaned pet in need of foster care,” writes Hannah Kirshner of Modern Farmer, who recently stopped in for a stay at the farm. “People usually stay in the bed-and-breakfast for two or three days, but pig guests often stay longer—sometimes indefinitely when circumstances don’t allow them to go home. They might come for weight loss or behavior modification, or just for ‘camp’ while their owners travel.”

If it’s pet pig boarding you need, there is no place more posh to leave your pig pal while you’re away from home. Many guests stay in the Village, with its camp-like cabins, private yards, and pools. But primadonna pigs who prefer profuse pampering may upgrade to the Luxurious Lodge, which includes the famous Lula’s Piggy Spa …

Not your average pigpen, now, is it?

So, tell me … if you have a pet piggy, I’d love to hear the perks of your porcine parenting.

Rewards from the Past

In the next issue of my magazine, we’re using a photo of one of my most precious heirlooms—my mother’s favorite—Jewel Tea dinnerware, collected piece by piece in the 1950s with credit rewards from Jewel’s household products delivery service. 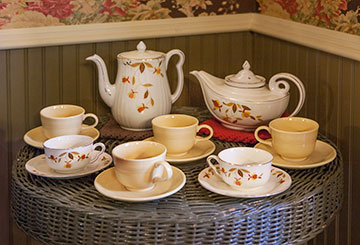 Jewel Tea was founded at the turn of the century in Chicago by Frank Skiff with just $700, a horse, and a wagon. 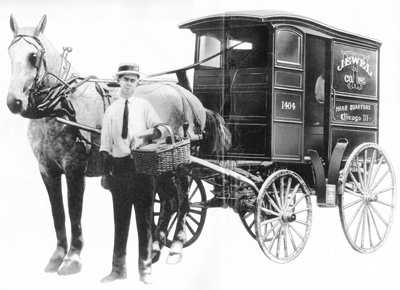 Frank sold coffee, tea, spices, and dry goods to area housewives. By the 1930s, Frank had turned his single delivery wagon into the Jewel Home Shopping Service, with a fleet of door-to-door salesmen in Jewel Tea vans who hawked groceries, cleaning supplies, clothing, cookware, tools, and more to housewives across the country. 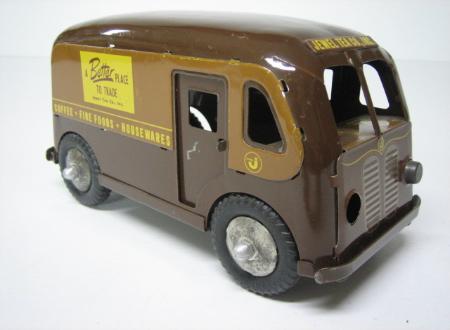 Jewel gave premium coupons with each purchase; when you had enough coupons, you could order any of the “premium items” from Jewel’s catalog, one of which was the Autumn Leaf china pattern. My mother collected two sets, one for everyday use and one for Sunday and holiday dinners, that came into the house piece-by-piece over the course of several years. As a little girl, I could see that the Sunday set was extra-special because it still had the lovely golden edges that had been worn off on our everyday set.

I also remember many an hour carefully pasting Green Stamps into a booklet and daydreaming of things to come from the S&H Green Stamp rewards catalog. 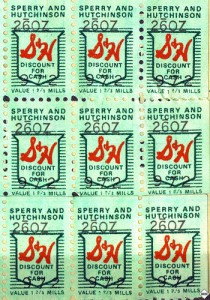 It was truly the stuff little-girl dreams were made of: pages and pages of color photos of dolls and toys for me and my sister, and everything from knickknacks to furniture and appliances for Mom. Not to mention bows-and-arrows, tools, and more for Dad and the boys, and even a big-ticket trip to Disneyland for the whole family! 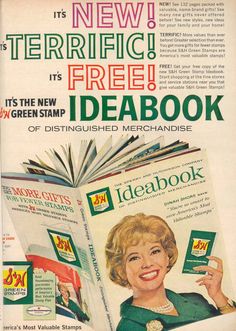 S&H Green Stamps were a staple of American culture from the 1930s until the late 1980s. The Sperry & Hutchinson Company sold their stamps and redemption books to retailers—from supermarkets to gas stations to department stores, every purchase came with a bonus of green stamps. Some retailers offered more green stamps per dollar—one more reason to bring shoppers into their stores. Shoppers collected the stamps and pasted them into stamp books, which could then be redeemed from the S&H Ideabook rewards catalog or at S&H redemption centers, which numbered over 600 by the mid-1960s. Eighty percent of American households collected the stamps. At their height, S&H printed three times as many stamps as the U.S. Postal Service and their Ideabook was the largest publication in the U.S. (I didn’t remember that the name of the catalog until I saw this graphic, but now I wonder if all those days of dreaming were firmly lodged in my subconscious, only to pop to the surface when I named my first book MaryJane’s Ideabook, Cookbook, Lifebook.)

To a frugal family of seven, these “rewards programs” fueled our fantasies even more than the Sears catalog … we could dream of owning beautiful things without any extra cash outlay. A true reward for shopping smart. And now, precious heirlooms from days gone by.