Just when you thought you knew about the world … 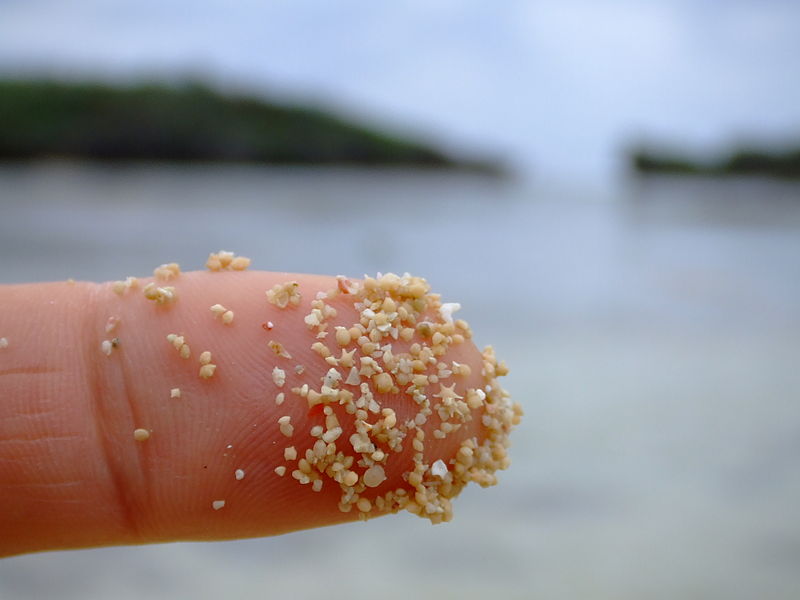 Photo by Geomr via Wikimedia Commons

Look a little closer, and you can see its splendid starry points: 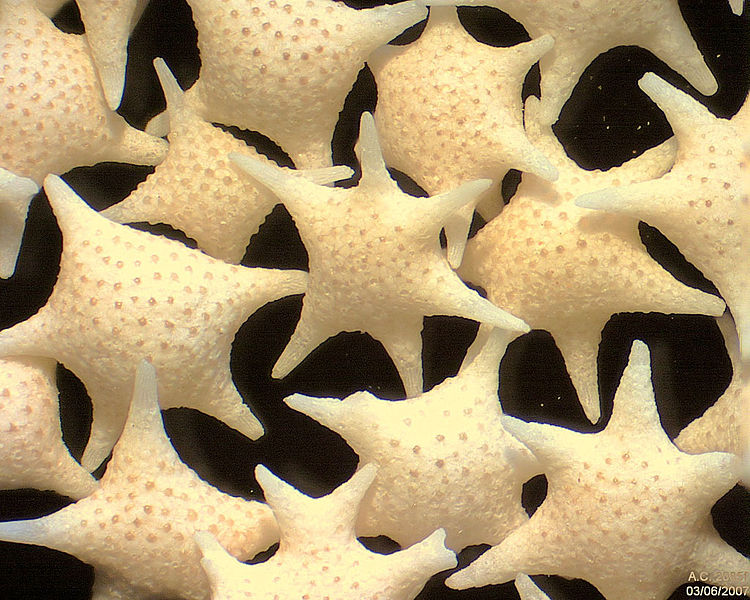 Say that three times (or even once).

When the micro-creatures die, their exoskeletons are washed ashore amid grains of actual sand on only a handful of beaches on earth, and they’re all in the vicinity of Okinawa, Japan.

According to legend from Okinawa’s Iriomote Island, the “sand” stars are Hoshizuna, the fallen sky children of the North Star and the Southern Cross. Long ago, the tiny stars sprinkled into the sea of Okinawa, where they were killed by a sea serpent and continue to wash ashore as miraculous star-shaped particles of “sand.”

I wonder if, when you read the phrase above, you pictured “time of the month” or “historic” undergarments (do comment).

In fact, I was referring to the former. 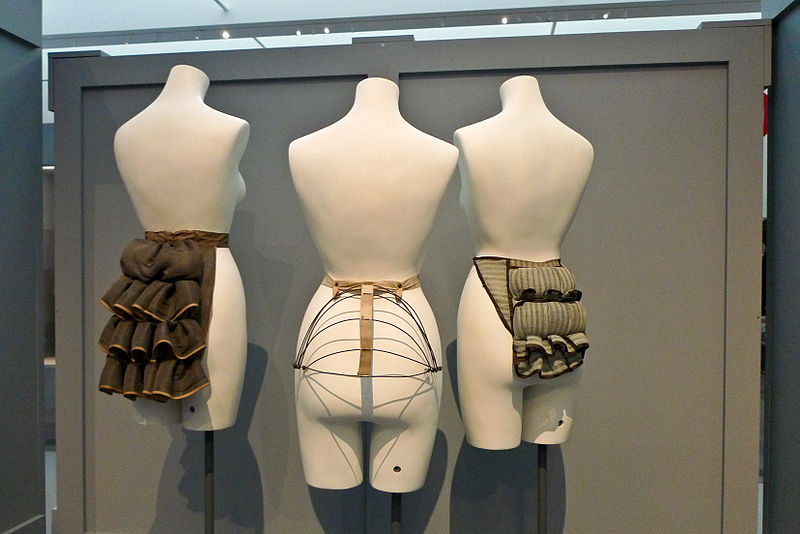 Moving right along, it’s no surprise that the modern world is all about hustle now rather than bustle.

And as the world of fashion has modernized, so have underthings (albeit a bit more slowly than the average runway ensemble).

And, with today’s tendency toward putting ALL subjects on the table, it is no surprise that enterprising women have put their minds to building a better mousetrap.

Somehow, that doesn’t sound right when referring to underwear. Maybe I should avoid idioms here.

Plainly speaking, a trio of women in New York City has, in their words, “reimagined feminine hygiene products to provide support, comfort, confidence, and peace of mind.”

A lot to ask from undies?

The gals at Thinx think not.

They report that 80 percent of American women have had accidents during, and have expressed anxiety about, their periods …

… and they set out to change all that.

But not just any underwear.

In short, they’re extraordinarily absorbent, antimicrobial (via embedded silver, not chemicals), so low-profile you won’t see them through clothing—and they’re pretty.

These panties are designed to fully replace panty liners, eliminating a lot of waste and discomfort as well as leaks, and they can be used in conjunction with tampons or menstrual cups on heavy flow days.

What’s more, Thinx are helping girls in need of much more than peace of mind while wearing white pants.

According to Thinx, 94 percent of girls in Uganda report having problems at school due to menstruation, and many drop out of school entirely as a result.

“We see a world where no woman is held back by her body,” the Thinx team declares. “We will work proudly and tirelessly until every single girl has an equal opportunity for the brighter future she deserves.”

Here’s how they’re doing it:

You buy a pair of “period-proof” THINX undies (and relish the results, even in yoga pants). Meanwhile, Thinx sends funds to their partner organization, AFRIpads, which trains Ugandan women to sew and sell reusable cloth pads, creating entrepreneurs in the process.

Watch this video for the full monty … er … the whole shebang?

Check out savvy suggestions for “building a cycle set” and saving money on multiple pairs of Thinx at Shethinx.com/pages/build-a-cycle-set. 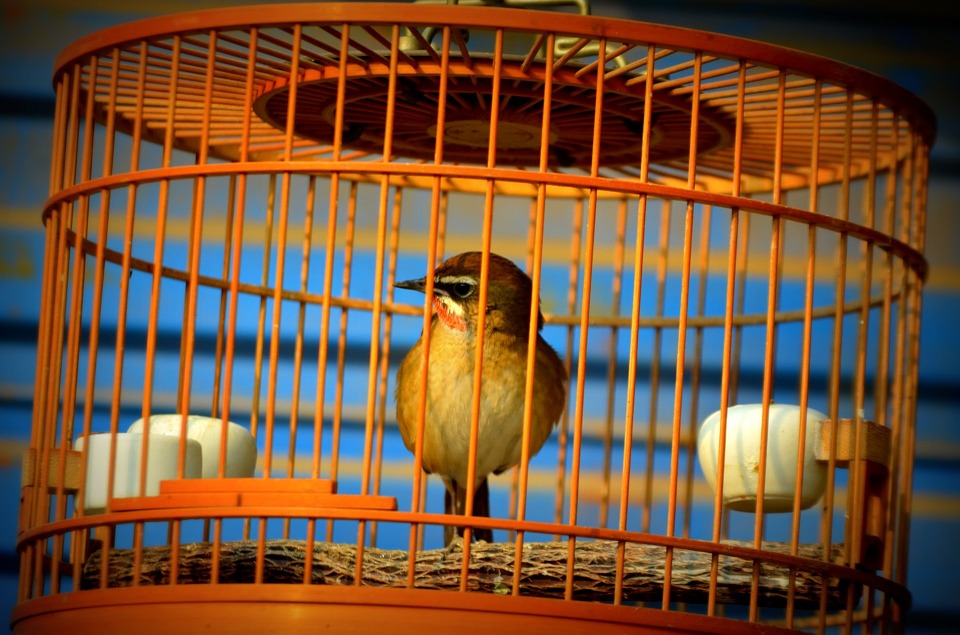 Photo by PublicDomainPictures via Pixabay

And if your spring dreams haven’t yet sprung, beware.

Explore more of Bridget’s artwork on her website, FloraForager.com, where you can also purchase prints of her collages.

I’ve always gotten a kick out of diner lingo and hate to see it go the way of the dodo, ya know? 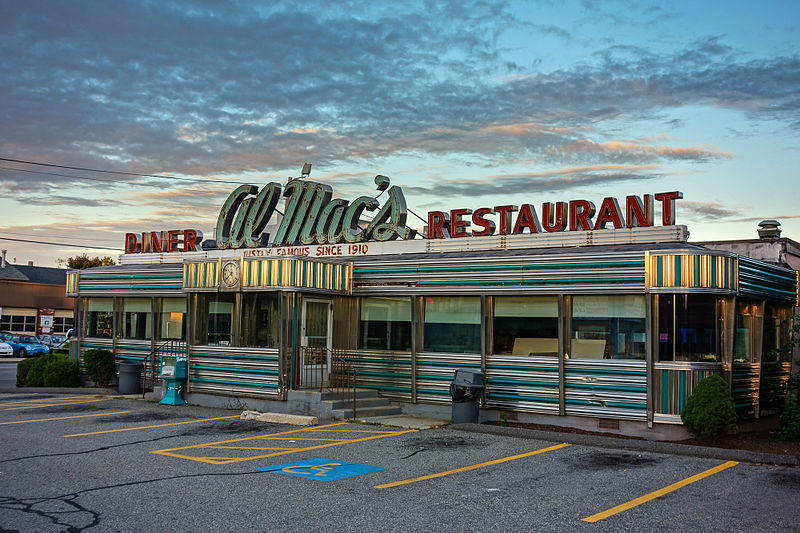 Hoping to do my part in preserving this cute ‘n’ cheesy (wink) café chatter,

With a brand-spankin’ New Year upon us, it’s the perfect time to explore new creative frontiers while honoring artistic traditions that have led us this far.

What do I have in mind, you wonder?

Well, you may remember how I told you about Zentangle, the addictive art of zany (yet so very Zen) doodling. 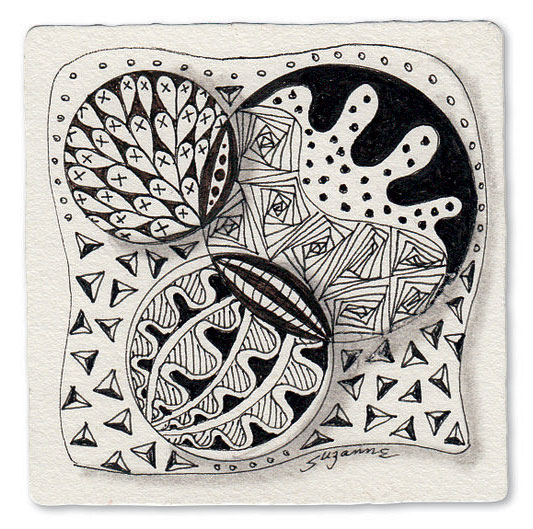 (If this doesn’t ring a bell, hop over to this post.)

True to form, each time I swirl and squiggle lines on paper, I find myself fantasizing about fabric, which inspired me to poke around a bit into the idea of Zentangle quilting, and wouldn’t you know it?

And it’s just as neat-o as I’d imagined.

Since I have a feeling you’re already itchin’ to start stitchin’, I gathered up this little list of goodies to get you going:

You can buy it on Amazon, but you can’t “look inside” like you can on many other books. Here’s a video flip-through to preview the wonders within:

Share your results on the Farmgirl Connection to inspire the rest of us!

Look what we found …

Jennifer Prior, of Flagstaff, Arizona, is sharing her ultra-cute excitement about our magazine.

Visit Jennifer’s blog, My FlagStaff Home, to follow her adventures.

Grannie sits in her oaken chair,
Firelight flits o’er her silvery hair,
The silent children around her sit,
As she pieces her patchwork coverlet … 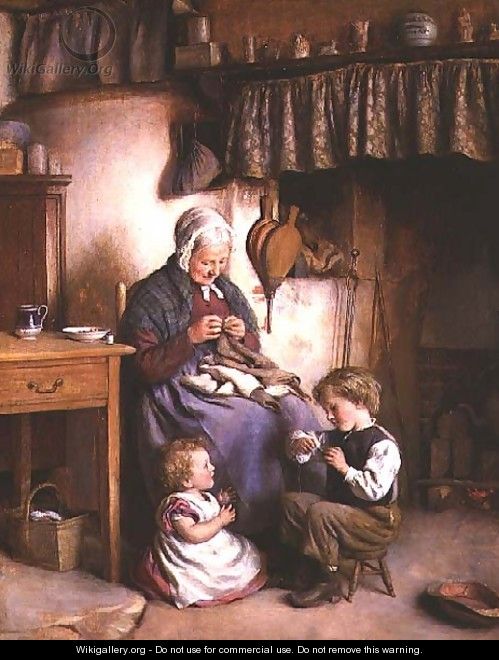 The Chimney Corner by Joseph Clark via WikiGallery.org

These lyrics from a traditional song called “Patchwork” are among the gems tucked in The Romance of the Patchwork Quilt by Carrie A. Hall and Rose Good Kretsinger. Originally published in 1935, this oldie but goodie is the kind of book that sentimental quilters covet. 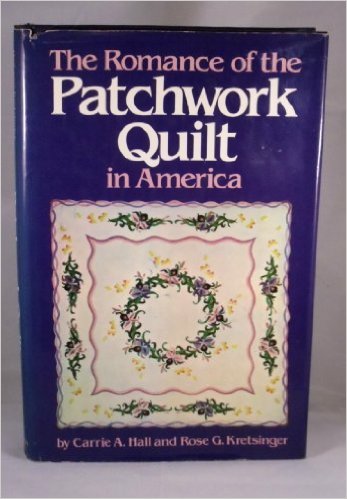 It’s neither glossy nor glitzy. It doesn’t knock your socks off with colorful photo spreads or tutorials. What it holds are sweet scraps of history.

Some woman sewed these points and squares
Into a pattern like life’s cares.
Here is a velvet that was strong,
The poplin that she wore so long,
A fragment from her daughter’s dress,
Like her, a vanished loveliness;
Old patches of such things as these,
Old garments and old memories.
– Douglas Malloch

Peppered with tidbits of poetry and prose, the book features hundreds of black and white images of full quilts and patches with the name of each pattern, making it a handy guide for modern quilters seeking to identify the patterns of an antique quilt.

“Over a period of years, Mrs. Hall has accumulated a collection of more than 1,000 quilt patches, both antique and modern, showing practically every design and motif of design ever created in America,” the book’s jacket reads. “This collection, which she has entrusted to the Thayer Museum of the University of Kansas, formed the inspiration for her book.”

Who knows? You might even discover a spark of design inspiration from yesteryear.

Although it’s out of print today, you can still pick up a used copy of The Romance of the Patchwork Quilt from many an online bookseller for under $10.

The sun has such a pretty quilt,
Each night he goes to bed,
It’s made of lavender and gold,
With great long stripes of red.
And bordered by the softest tints
Of all the shades of gray,
It’s put together by the sky,
And quilted by the day.
– Laura Coates Reed 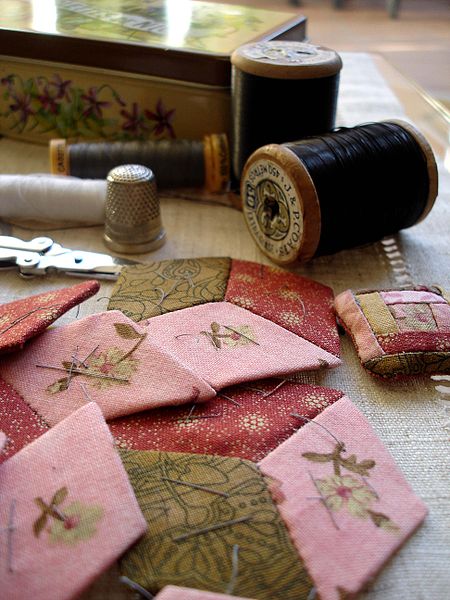 Photo by Anna via Wikimedia Commons

While this may sound like some sort of neologism meant to convey, say, surprise or delight, it is actually the pronunciation of:

Don’t worry if you’re coming up empty on definitions because duodji isn’t an English word–not even close. It actually hails from a remote group of nomadic people called the Sámi who herd reindeer across the far northern reaches of Scandinavia. 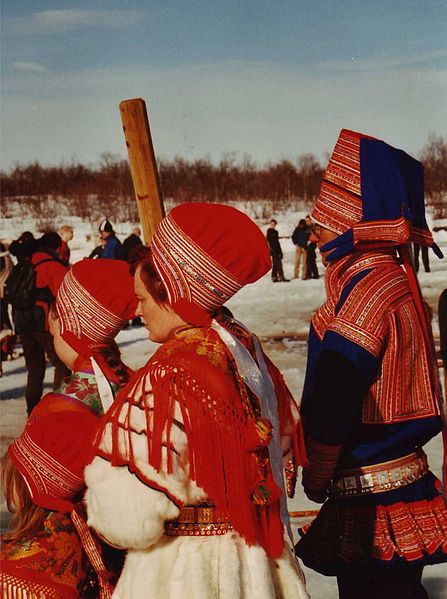 Duodji refers to any number of handcrafted items made by the Sámi that are both aesthetically beautiful and useful (clothing, accessories, household items, and tools). Traditionally, duodji crafts were divided into men’s and women’s work. Men used mostly wood and antlers as well as other bones from reindeer when crafting items like this salt cellar: 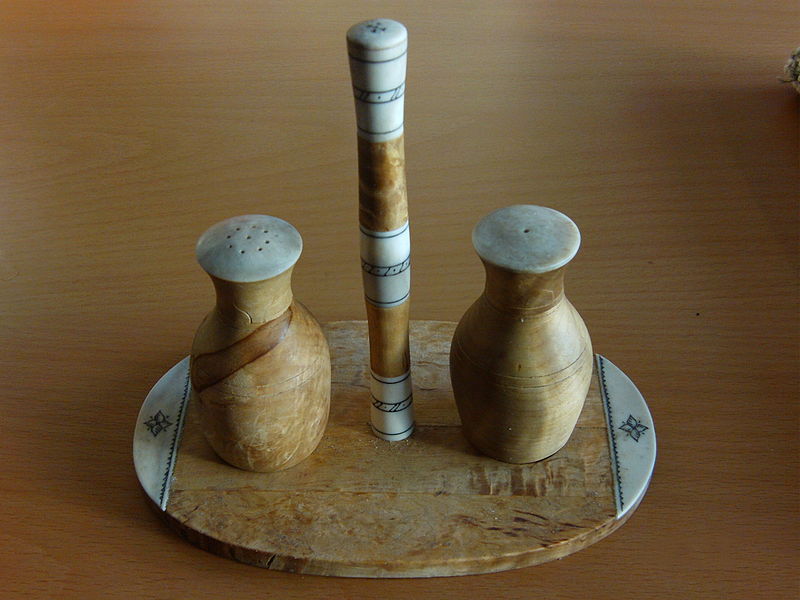 Women incorporated leather and fur in elaborately stitched items like these marvelous mittens: 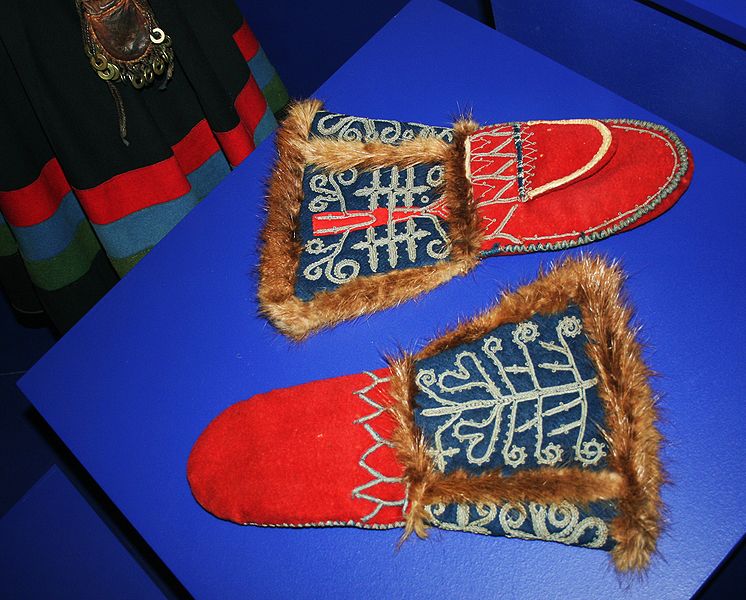 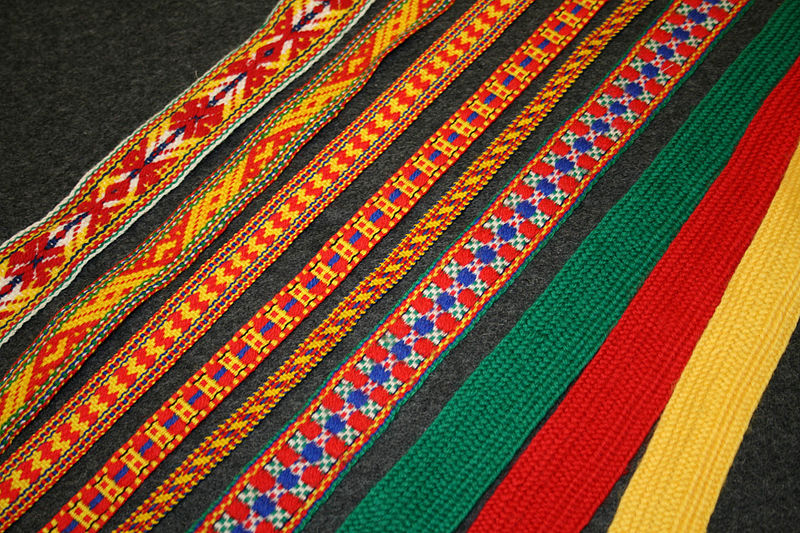 Photo by Duodjiinfo via Wikimedia Commons 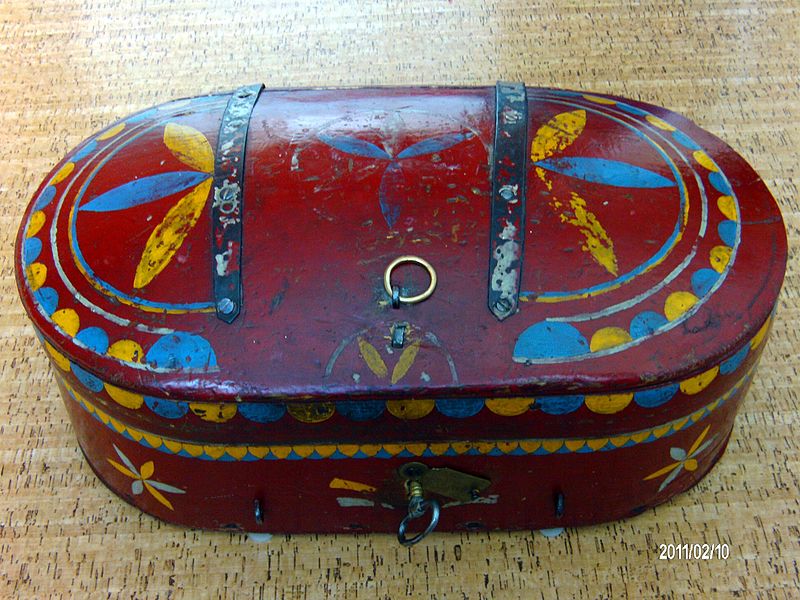 “Duodji represents cultural continuity with our ancestors,” explains Ellen Marie Jensen, author of We Stopped Forgetting. “There are creative and functional adaptations over time, and the individual duojar has room for individual creative expression. Duodji is both functional and beautiful.”

so I feel I have some authority to say,

But don’t just take my word for it.

“University of Texas at Austin psychologist and researcher James Pennebaker contends that regular journaling strengthens immune cells, called T-lymphocytes. Other research indicates that journaling decreases the symptoms of asthma and rheumatoid arthritis. Pennebaker believes that writing about stressful events helps you come to terms with them, thus reducing the impact of these stressors on your physical health,” reports PsychCentral.com. “Scientific evidence supports that journaling provides other unexpected benefits. The act of writing accesses your left brain, which is analytical and rational. While your left brain is occupied, your right brain is free to create, intuit, and feel. In sum, writing removes mental blocks and allows you to use all of your brainpower to better understand yourself, others, and the world around you.”

You can find 96 more reasons to journal here.

Good stuff, I tell you. My mother wrote in her journal (several volumes) most every day of her life, some days only a sentence or two. But, what a treasure to leave her children.

The new year is the perfect time to start jotting a journal. Yes, you! It won’t do to hide your head in the sand. 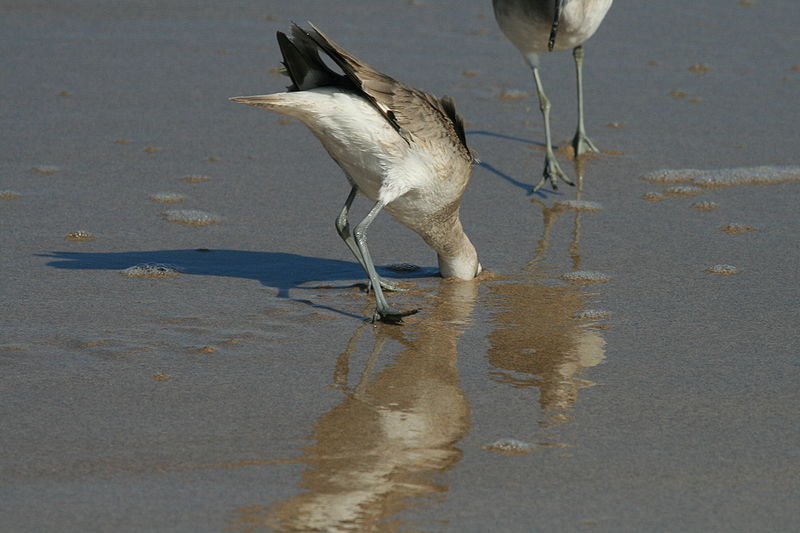 photo by Korall via Wikimedia Commons

Journaling is not another insurmountable task to add to your to-do list. In fact, it’s a wonderful way to tackle life with more merriment and less moping. According to a study published in Advances in Psychiatric Treatment, journaling just 15 to 20 minutes on five occasions was enough to help the participants deal with traumatic, stressful, or otherwise emotional events.

So, let’s get down to the basics:

For a little more inspiration, here’s a video pep talk about the joys of journaling: