If you feel a certain zeal for Zentangle, then follow me along another winding path … 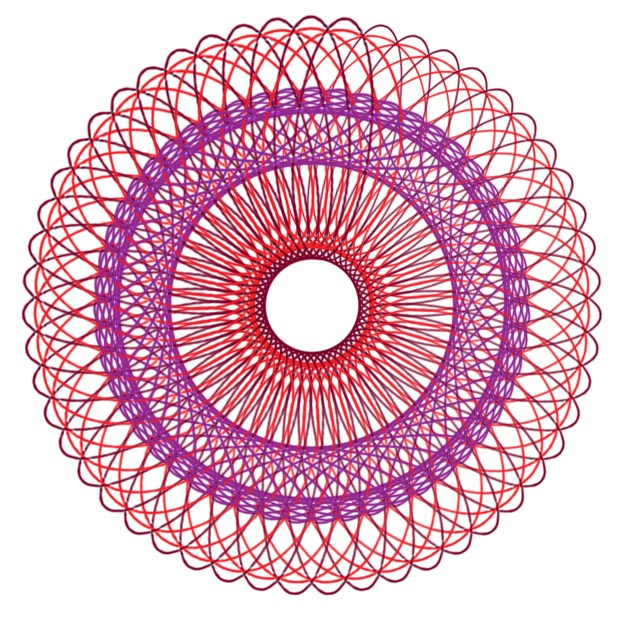 You might recall this mesmerizing pastime from childhood, complete with little plastic gears and multi-colored pens. 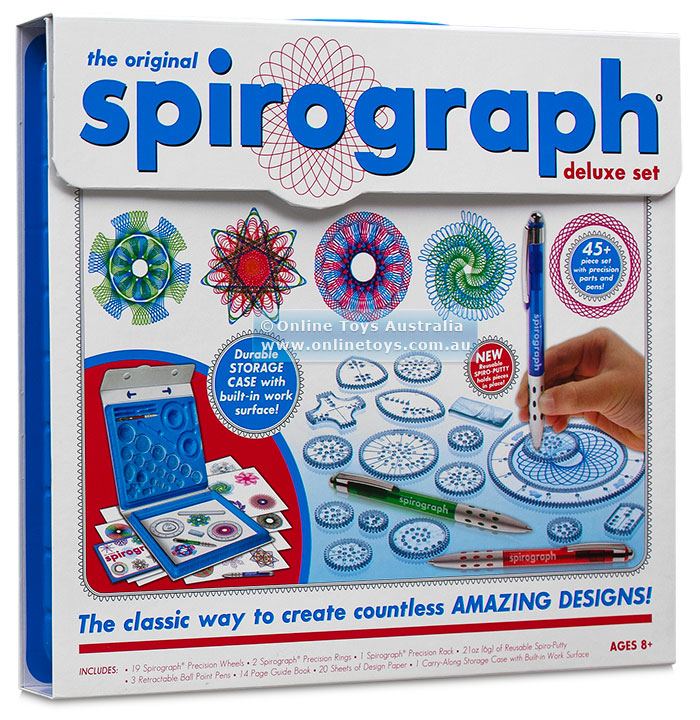 With all of the recent buzz about adult coloring books and Zentangle, it’s no surprise that the Spirograph is finding its way back into fashion.

“The only toy I still have from growing up is a Super Spirograph,” shares Heather Holm of Spirographic Art. “I was already a teenager when I got it, so that would have been in the early 1970s. My sister had a regular Spirograph, and we both loved it, so when the Super Spirograph came out, I had to get one. It has survived many moves and a fire … now my son enjoys playing with it too. One day he observed, ‘Whoever invented this was a genius.’”

Heather is such a passionate proponent of the Spirograph and all of its gorgeous geometric possibility that she dedicated her entire website to the art—tutorials, tips, product reviews, and coloring pages.

A variety of Spirograph kits are available from vendors like Amazon, from travel sized sets to super deluxe versions with a dozen or more discs in different shapes and sizes. To get an idea of how hypnotically creative you can get with circles and spirals (stick with the video to the grand finale), watch:

And, of course, how sweet is this? Cookies with Spirographic icing designs … Do you remember Spirographing? Do share …

For all of you moms who’ve found yourselves perched in an empty nest, 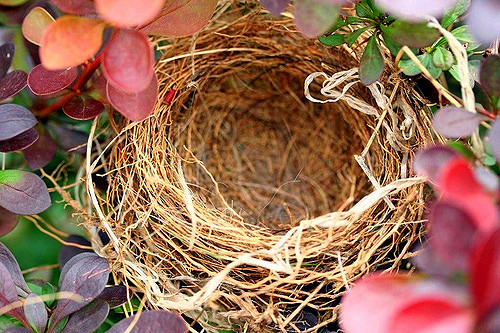 wondering what your kids are up to today …

Meet Jonathan Kubben Quiñonez from Brussels, a 27-year-old traveler who steadfastly keeps his mom in the loop, no matter where in the world he happens to land.

From the top of a pyramid in Mexico’s Yucatán Peninsula, 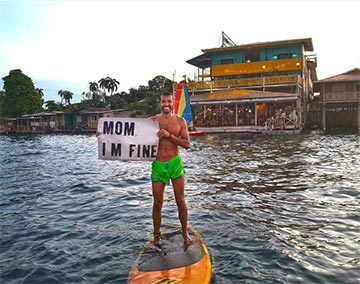 to the sea floor of Colombia’s San Andrés Island, 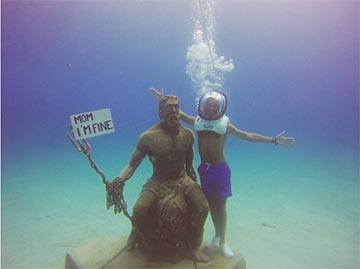 “Quiñonez quit his job, sold his car, and ventured out to see the world. However, after arriving in Cuba, the first stop on his round-the-world trip, he had a hard time getting in touch with his family,” reports Travelweek. “So the intrepid traveler came up with a genius—and heartwarming—way to let his loved ones back home know of his whereabouts: by starting up an Instagram account and posting photos of himself in new locations, holding up a sign that reads ‘MOM, I’M FINE.’” 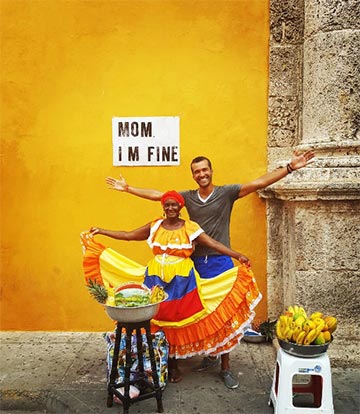 Yarn addicts, this one’s for you!

If you love needlework, most likely, you’ve knitted or crocheted a gift for a loved one. Potholders, shawls, throws, even sweaters.

But maybe you really, REALLY love needlework and have always longed for an even bigger project. Well, sisters, I’ve got one for you … dare we call them car cozies? 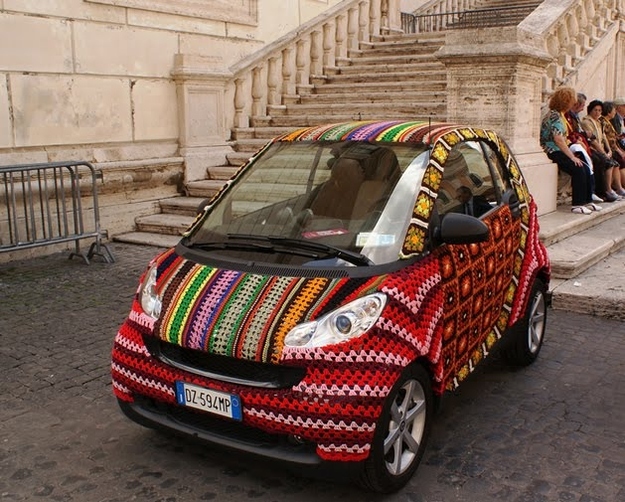 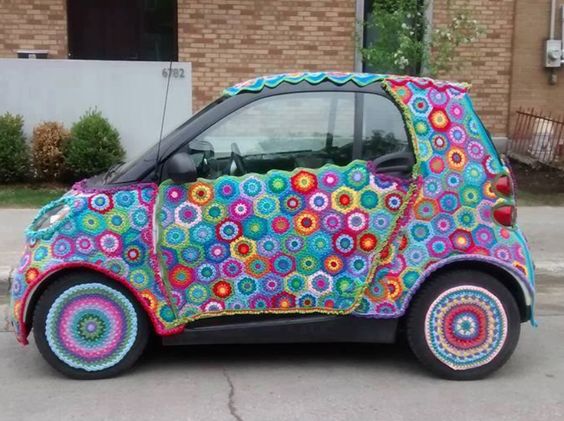 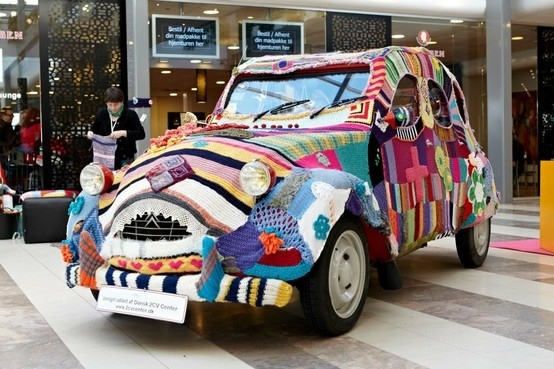 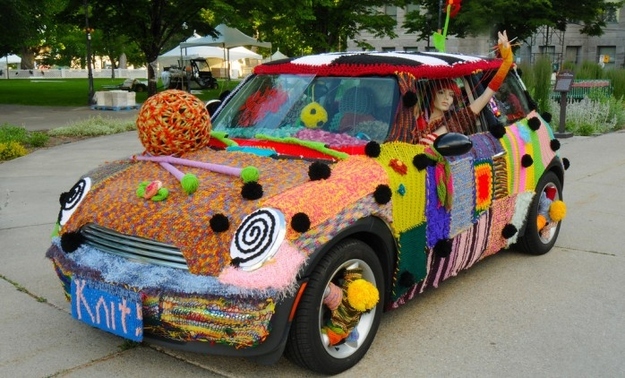 or how about a bike cozy? 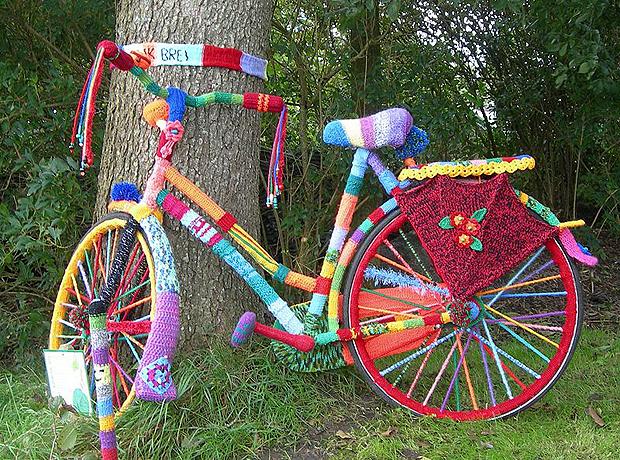 or even a bus cozy? 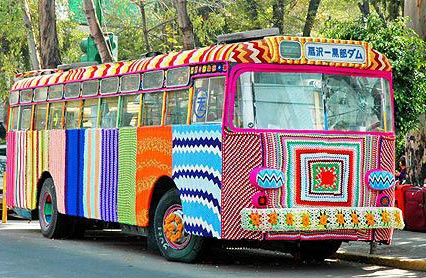 Have you volleyed around the idea of going solar? 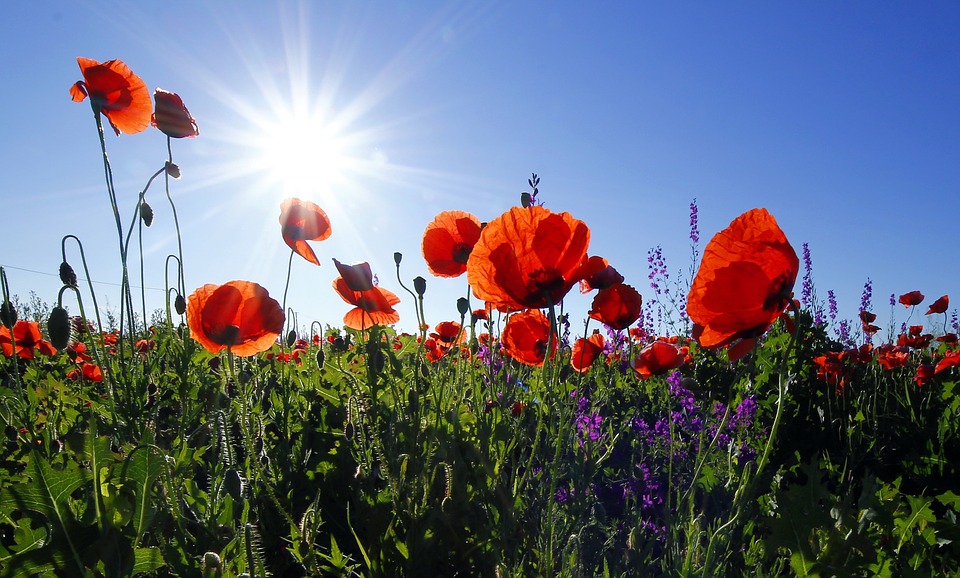 Photo by Unsplash by via Pixabay

If the venture seems a little too “out there” or overwhelming to pursue, you might be interested in a free online Google tool called Project Sunroof.

The tool “helps homeowners explore whether they should go solar or not” by offering a birds-eye view (aka high-resolution aerial maps) to help calculate a roof’s solar energy potential “without having to climb up any ladders.” 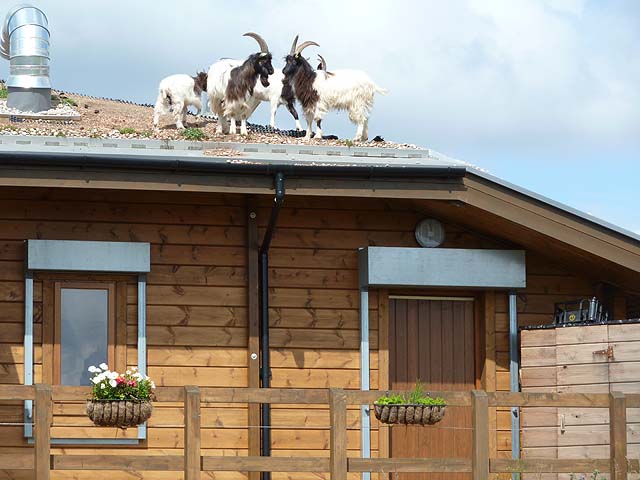 Photo by Joan Sykes via Geograph

(I couldn’t resist that photo!)

Currently available in 42 states, the tool searches your address and, if it’s available, comes up with a basic analysis of how much sun your roof gets and what sort of solar installation might work as well as prospective costs and savings. You can also tweak the estimates based on your actual electricity usage and other parameters. If you’re interested in exploring more, Project Sunroof will help you find local installers who could give you a more accurate quote.

If your address isn’t accessible yet, fear not—Google plans to reach all 50 states this year.

If the image below strikes your fancy, then you are, dear, you are … 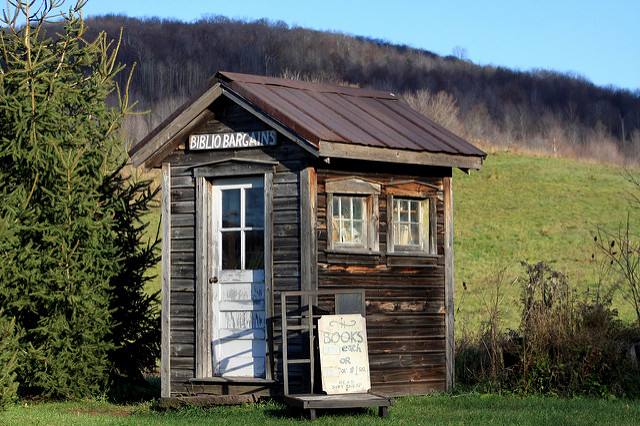 “Sheddie” is one of those catchy British terms that means, loosely translated, shed enthusiast.

If you are, indeed, a sheddie, then you might also identify as an outpostie, shackie, coopie (I’m just making those up as I go, in case you were wondering).

In England, it seems that there’s a sizeable population of sheddies—enough to support a site called Readersheds, which celebrates every conceivable style, shape, and size of shed from the traditional to the unconventional. 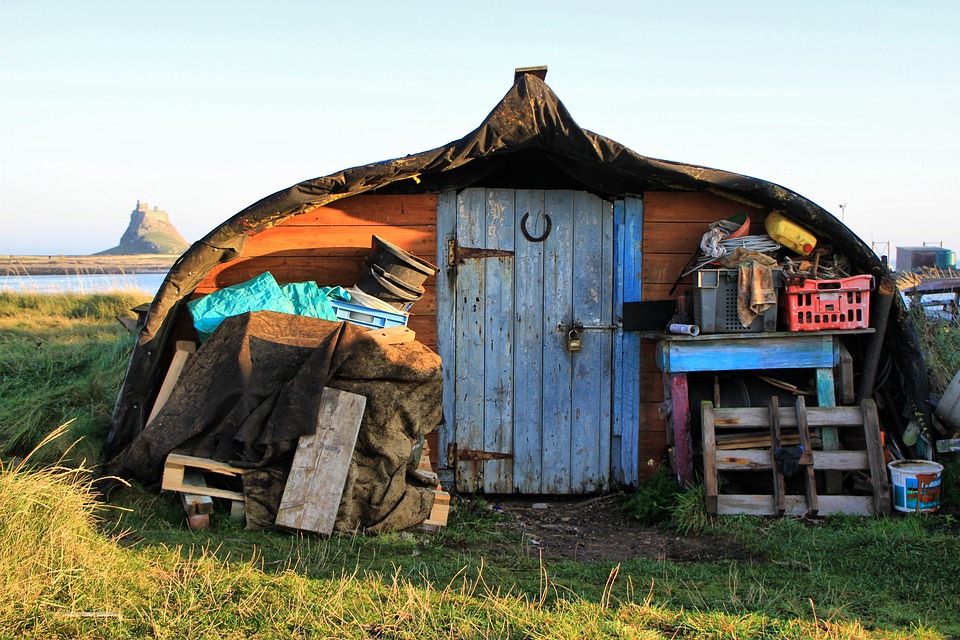 Photo by RobArmstrong2 via Pixabay

Readersheds showcases sheds a-plenty, but its crowning achievement is its annual Shed of the Year competition, which kicks off each year in May.

The man behind Readersheds, known simply as Uncle Wilco, is the head judge and founder of Shed of the Year. A passionate sheddie since his youth, he claims to have made it his mission “to open the eyes of the world to the importance of the shed.” 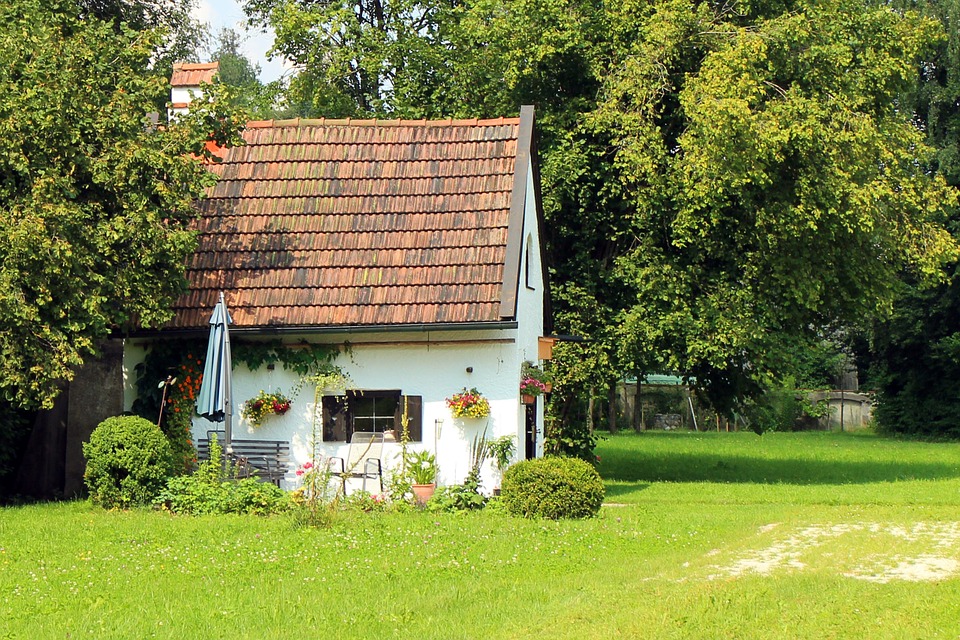 Photo by Antranias via Pixabay

This year, a panel of judges has selected a shortlist of public shed submissions for each category:

“Now it is up to you to decide on the winners from each one,” they invite. “Take a look at the sheds our panel of experts have selected to represent each category before voting for your favourite. A final judging panel will then pick an overall winner, whose creation will be crowned Shed of the Year 2016, later this Summer on the Channel 4 show Amazing Spaces Shed of the Year.”

Voting (which can be done here) closes on June 8, but if you miss it this year, keep up with Readersheds on Facebook so that you’ll be ready for next year’s contest. 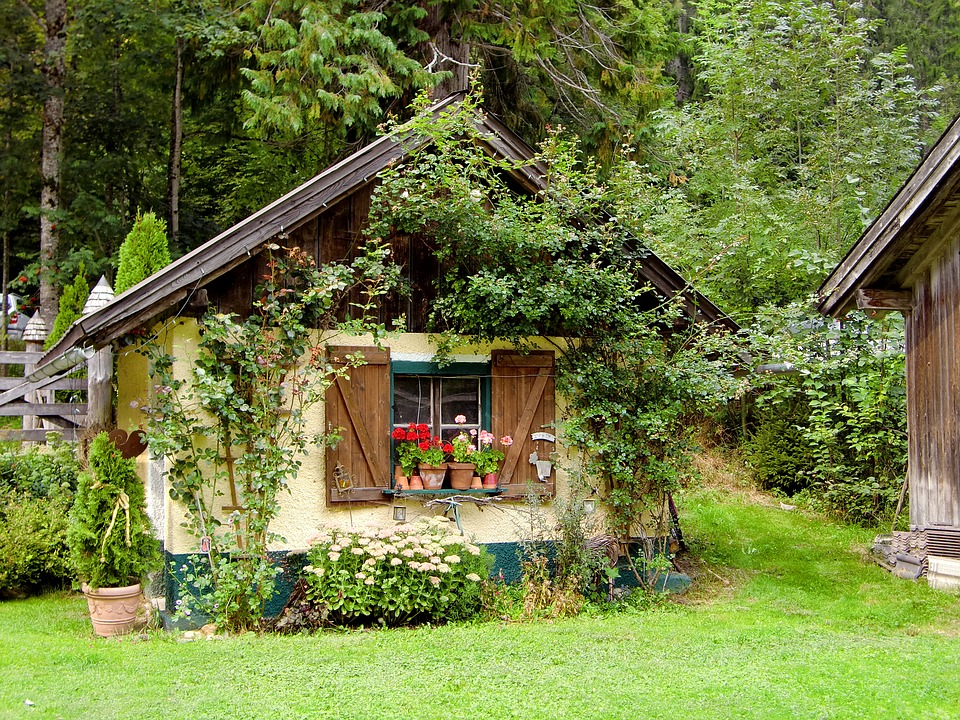 Photo by Efes via Pixabay