With another holiday on the horizon, I’ve been doing a little gift browsing. Of course there are all the usual pinks and purples and hearts this and hearts that, but I stumbled upon an enterprise called Child’s Own Studio that claims to have perfected the art of “softie-making” from children’s drawings.

In other words, they can take your child’s drawing and turn it into a plush toy … but I like the term “softie-making” better. And why might you be interested in one of these softies? I learned that young children draw from their imaginations with pure self-expression, and it’s based on an understanding of what is being drawn rather than on observation.

Around the age of 5, children develop a visual vocabulary, or their own unique symbolism. When they draw a cat, it will always be the same basic image, maybe altered with stripes or color. It’s not until around the age of 9 or 10 that children begin to be influenced by realism and often lose their passion, frustrated that the object being drawn doesn’t look exactly like what it represents. From what I can gather, there’s a sweet spot of self-expression from about 5 to 9 years of age, and these plush toys serve as an excellent way to preserve that. 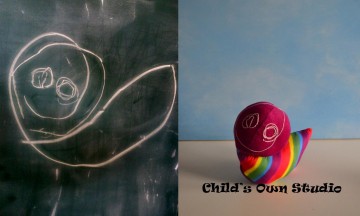 Inspired by a drawing from her 4-year-old son, Wendy Tsao started Child’s Own Studio in 2007 as a home-based art venture in Vancouver, B.C., but she’s had so many orders that she’s had to expand. The softies start at $70, but that seems like a small price to pay for such a unique and personalized gift that was hand-stitched just for you. The average size of a toy is about 16”, but they also offer super sizes up to 5′. And to top it all off, Child’s Own Studio is enthusiastic about helping fundraising campaigns for non-profits and schools. 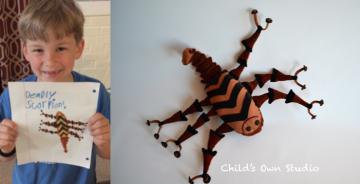