Stick with me, sisters, I’m on a roll.

Yep, like a ballpoint pen, I’m rolling across the open page …

On the heels of my Manners post in late March, I’m feeling all fired up about …

… letter writing, and in my frenzy for “fine” print, I found a website that filled me with wonder:

I don’t need to say another word, do I? You’re probably already linking your way over to the site now.

There’s just something about a sealed envelope, folded (scented!) paper, and the elegant twists of handwritten script—letters set my heart to pounding. Ah, the curiosity, the piquant promise in such a small package!

Although Letters of Note may not offer the full sensory experience of hands-on letter reading, it comes pretty darn close by divulging letters, postcards, telegrams, faxes, and memos from some of the world’s most famous figures. 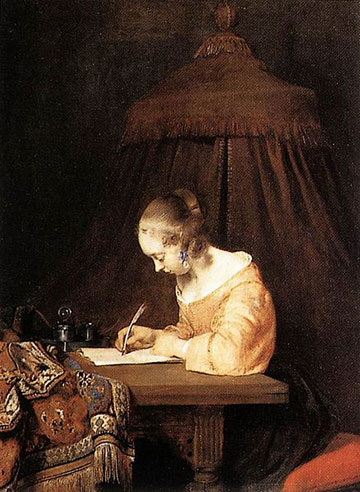 The Letters site is a blog-based archive of fascinating correspondence, complete with scans and transcripts of the original communiqués. I still can’t get over the thrill of seeing Harper Lee’s handwriting, up close and personal.

The collection is updated every weekday, so it’s almost like stopping by to pick up a letter in the mail—a letter that gives you a glimpse into the life of someone noteworthy. It feels a little like eavesdropping on history.

Letters of Note creator and editor Shaun Usher is also preparing to publish a book by the same name in November of 2012 because, in his words, “Letters are small artworks, and this book will be catalogue of beautiful, meaningful objects.”

Usher has offered a few tidbits to tantalize us in the meantime. His book will include: