“In war, there are no unwounded soldiers.” Jose Narosky

Charlotte Bronte: “Prejudices, it is well known, are most difficult to eradicate from the heart whose soil has never been loosened or fertilized by education; they grow there, firm as weeds among stones.”

One of the most important things we can offer the homeless is understanding, and that starts with challenging our assumptions about them. Let’s loosen and fertilize our hearts by debunking a few myths: 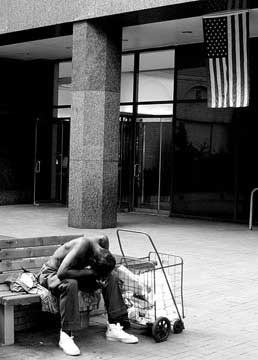 *They’re dangerous: Homeless people are more likely to be the victims of crimes than the perpetrators.

*They freeload off of American tax dollars: Many of our nation’s homeless have contributed something far more dear than tax dollars. Recent numbers suggest that 1 in 4 homeless people are veterans, and 70% of homeless vets served for three or more years. A leading reason for their poverty is the high incidence and insufficient treatment of post-traumatic stress disorder.

*They’re substance abusers: It’s true that the number is high, an estimated 50%. But some only began using after becoming homeless. Still others start after accepting protection from abusers.

*They don’t want to work: Many people lose their homes while they’re still holding down steady employment. Full-time hours at minimum wage isn’t enough to cover basic living expenses in many major cities. Others have insufficient or no health insurance when a serious medical condition strikes.

*They’re mentally unstable: Only 25% of the homeless suffer from a mental illness. Those who do are often refused employment or housing (even when they have money) as a consequence of their illness.

*They’re too stubborn to go to shelters: Capacity and safety standards vary widely at shelters across the country, and homeless people often rely on street-based safety networks. And some shelters are gender-specific, forcing couples and families to split up if they want beds.

Do you have any poverty myth-busting of your own to add? Please do share your ideas for being more helpful and understanding of the poor in our communities.