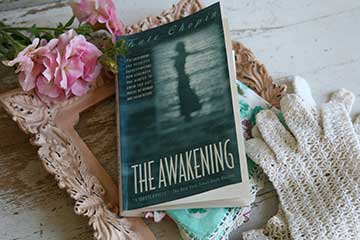 If you’ve ever fantasized about throwing up your hands … don’t. They can be real page turners.

If you’ve ever fantasized about throwing up your hands, leaving everything behind, and taking up painting in a seaside cottage, this read will have you glued to its pages. Welcome to Kate Chopin’s The Awakening.

The Awakening tells the story of Edna Pontellier, a young Creole wife and mother who has long suppressed disappointment with her passionless life and stern patriarchal husband. Edna’s life is passive, receptive, and propelled by social pressure—not uncommon for a Southern woman in the late 1800s.

Edna begins to awaken to a more vital, self-directed life. Once she’s tasted this new awareness, there’s no going back. But going against the grain and casting off her obligations comes at a price; Edna realizes that drastic measures may be necessary to give her life a course correction.

The Awakening was (gasp!) a banned book. By today’s standards, you’d be hard-pressed to figure out why. But at the time (1899), the story of a woman questioning her marriage, family, and place in the world and gravitating toward art was more shocking then than it would be now. Condemnation and vitriol forced Chopin into financial crisis and literary obscurity. It’s only now, over a century after her death in 1904, that Kate Chopin is appreciated as a visionary author, and The Awakening as a peephole into a world that few authors explored at that time.

Teaser: Whomever finds the word REMONSTRATE in The Awakening (found in here in Gleaming Word-a-Week) and can tell me the page number will get an adorable hand-crocheted hankie in the mail.

Leave a Reply to Amy Cancel Your Response