Have you ever found yourself trudging up your front steps, arms bulging with groceries, and suddenly pondering …

Just how do those picturesque rural women in faraway countries glide over the open ground with loads every bit as bulky on their heads?

I, for one, can barely maintain a book on my head in a mannerly fashion while creeping across the room—much less gallons of water … for MILES.

Balancing burdens few of us could comfortably bear on our backs is a tradition as old as civilization. The ancient Egyptians, in a ritual of repentance, put a sizzling spin on the practice by carrying a basin of burning coals atop their heads.

Most “tote-à-tête” cultures, however, seem more interested in practicality than penance.

After eons of head carrying, African-American slave women upheld the practice throughout 19th century in the United States. It was considered an efficient means of moving stuff in the absence of wheeled transport.

According to one observer during the Civil War in South Carolina, “I have seen a woman, with a brimming water-pail balanced on her head, or perhaps a cup, saucer, and spoon, stop suddenly, turn round, stoop to pick up a missile, rise again, fling it, light a pipe, and go through many revolutions with either hand or both, without spilling a drop.” 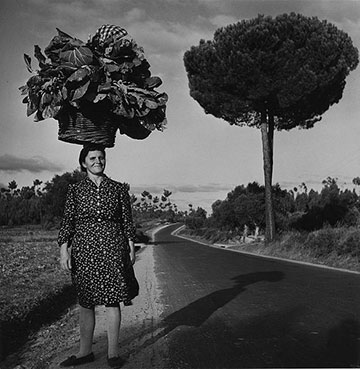 A peasant woman carries her garden produce on her head in Portugal, circa 1950. Photo courtesy of Charles Fenno Jacobs, Wikimedia.

Can you imagine how much work a gal could get done in a day?

Even now, women around the world are navigating with their noggins piled high.

As uncomfortable as these practices might make a liberal-minded modern Westerner, research has concluded that head-carrying is as efficient as it is astounding. Up to 20 percent of a person’s body weight can be carried on the cranium with no extra exertion of energy!

Sounds good, but I wouldn’t start stacking those groceries on your head just yet.

Not only do head porters practice for years (yes, years) to develop their strength and grace, they also develop a peculiar gait conducive to the undertaking. And then there’s that minor matter of a grooved skull …

Still, when you look at the smiling lady in the photo, doesn’t it make you want to at least give it a try?