Don’t miss Miss Wilma’s Christmas Show comin’ right-up-just-around-the-corner in November. Get the low-down here. And if for some reason, you haven’t met or heard of Miss Wilma, below is the feature we ran on her in 2005 in an issue of my magazine. (She’s still sewing for us, claiming she’s burned up several sewing machines:) 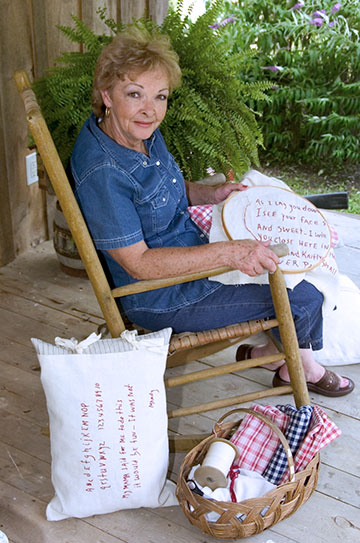 When pillows piled on chairs or plumped into couch corners are made by Miss Wilma and Friends, they are pillows that echo times past. Those are times Wilma Gilbert remembers well. She still lives in rural Kentucky, half a state from where she was born in the mid-1940s. And she cherishes memories of time spent with her grandmother, turning old scraps into colorful gowns for corncob dolls. “When I was just little, I stayed a lot with my grandmother,” Wilma says, her Southern accent deepening with the memories. “My grandmother had boxes and boxes of old quilt scraps, and I’d sit and play with them for hours.”

These days, Wilma shares a pastoral wooded farm with her husband, Sterling. “We have acres of oak and maple, walnut and cherry. Cedars grow here. And we brought in fir. This area one of the best little places left in the whole world. Everybody knows everybody. And it’s just about perfect.”

Wilma and Sterling see the son and daughter they raised often. “Our daughter, Susan, says she doesn’t like sewing and antiques, but that hasn’t stopped her from telling me what of my old furniture she wants someday,” Wilma quips. “And I can’t get my son, Brian, to working on these pillows because he wants to fish all the time.” Wilma’s granddaughters sleep over every Friday night. “Six-year-old Brieanne likes to be outside with my husband, playing with the animals,” Wilma says. “Eight-year-old Brooke is just like I was. She loves making things out of cloth. She helps me make pincushions, and I give her the money out of them. It’s a good way to start learning about making a living.”

Besides pincushions, Wilma sews her signature pillows, old-fashioned baptismal-type baby dresses, drawstring bags and more. She sells all her wares at events like antique shows and sells cushions and drawstring bags through MaryJanesFarm magazine. “MaryJane walked into my booth at an antique show in Texas,” Wilma recalls, “and that was a wonderful day.”

The pillows that Wilma makes have history woven right into them. Each is down-stuffed and covered in repurposed ticking. “I buy old feather beds,” Wilma explains. “I empty the feathers into garbage bags, then I wash the covers through a wringer washer with lots of bleach three times before they ever go into an automatic washing machine or dryer. After that, I iron the material, cut it up, make it into pillows and stuff them with feathers.”

It used to be easy for Wilma to find feather beds close to home. But she has been making pillows this way since 1984, and now uses more than 200 feather beds a year. So she has to seek them farther afield. “I have people from here to Cincinnati buying them for me,” she says. “And when I can’t find enough featherbeds to keep up with demand, I buy new pillows for the feathers. Then I put those feathers into old ticking from materials I find at antique shows.”

New ticking can be purchased from stores and catalogs, but Wilma finds it less tightly woven than vintage ticking. And that tight weave keeps the feathers from working out through the cloth. What Wilma’s pillows look like depends on what old ticking she currently has on hand. “Blue and white is pretty common,” she says. “Red and white, you can’t hardly find it at all anymore.” But there are many pretty fabrics still available. And once filled and plumped, Wilma’s pillows are dressed in old-fashioned style. One may boast a tie-on cover of red-plaid ticking. The next one is tucked into crisp, white linen with a fancy lace edge. A third is encased with ivory linen with an original verse embroidered on one side and an old-fashioned design on the other. All are unique and designed to bring memories of simpler times.

Wilma draws some of her pattern ideas from a turn-of-the-century book of patterns. “But most of my embroidery prose, I just make up,” she says. “Like the ‘Good Morning, Good Night’ verse. It’s just whatever runs through my head, I’ll make pillows with that embroidered on them. And if they sell good, I’ll make some more.”

Even the sewing machines Wilma uses have led previous lives. “I have 17 sewing machines,” Wilma says, “and when I did the first big order for MaryJane, I worked them so hard I almost burned them up.”

As a child, Wilma learned to sew on a treadle sewing machine. Sterling bought her first electric machine in 1963 for $50. She now owns a new state-of-the-art machine and a serger. But what she likes for her projects are the old Sears and Singer machines from the 1950s and ’60s. “They’re built sturdier and will take the heavier fabric,” she explains. “And the sewing I do is supposed to look like the sewing people used to do. The old machines have that stitch. So I always use those old machines.”

It’s what Wilma grew up with. And it’s that nostalgic theme that she continues to work into her pillow designs. Pillowcases that button or tie. Or cases short enough that one end of the striped ticking-covered pillow is exposed. “When I’m doing pillows, I think up my own patterns based on traditional methods,” she says, and then she laughs. “I’ll never have time to make all the different pillows that have come to mind.” But she keeps trying, because being industrious is something she learned young. “I’m the oldest of four children,” she says. “I grew up on a farm. And I’m not one just to be sitting.”

Wilma’s folks were married in 1943, when her mom was just 13 and her dad 17. “My mama had four children by the age of 20. And being the oldest, I guess I was sister-mom to three brothers,” Wilma says. “My mom helped dad a lot in the fields with the crops, corn, tobacco and cattle. We didn’t have a lot of money. But that didn’t matter because no one else had any either. We kids were raised to be honest and to work hard for what we had.”

Now, Wilma’s parents sometimes help her. Her father makes stick bobbins. Her mother hand-embroiders pillowcases. When a big rush order comes in, both of them stuff pillows. “They live over a hundred miles away,” Wilma says. “If they were closer, I know they’d help me even more.”

Making those pillows is work done the old way. By people who understand what it means to “use it up, wear it out, make it do.” The result is priceless. History we can hold in our hands. Pretty pillows that remind us of simpler times. Handmade by Miss Wilma and Friends.