It’s happened … the zombie apocalypse is upon us. Oh wait, it’s the zombee apocalypse.

Well, it is getting close to Halloween. Wait, this isn’t someone bee-ing funny. I do find it a little bee-musing, but apparently bees are in trouble in yet another new way.

If you’ve kept up on these bee-utiful (ok, last one, I promise) pollinating honeys in recent years, you’ve heard that bees have been on the decline. The strange decimation of these insects has been given a general title, Colony Collapse Disorder. Along with a few other proposed culprits, such as pesticides and chemicals, they now have an additional foe in their midst. The Zombie fly (Apocephalus borealis) is a bee parasite, and it’s made its way to Washington state. Discovered in 2008 in California, this fly has been on the move in the most creepy of ways. Ever seen the movie Alien? (The previews were enough to make me jump out of my skin.) These flies are the real life version! 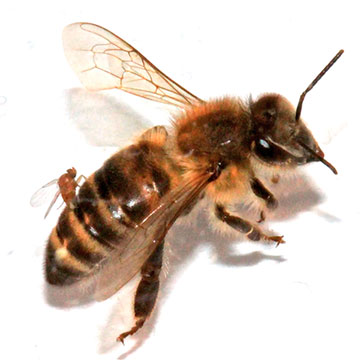 They lay their eggs into the back of a honeybee, which scrambles its brain to the point of suicide. The bee will leave its hive at dark in search of lights. Once there, it flies around erratically, and finally dies.

That’s a night buzz I’d prefer to avoid? A second wind I could live without? Feelin’ a little “punny” today. 😉

Seriously. From the Mercury News:

“The hapless bees walk around in circles, with no apparent sense of direction. Some are unable to even stand on their legs.

‘They kept stretching them out and then falling over,” [lead investigator and biology professor John] Hafernik said. “It really painted a picture of something like a zombie.'”

The progression of these flies can be followed on Zombee Watch. So, if you are a beekeeper, keep your eyes peeled. Beeled? Zombee Watch is teaming up with citizen scientists (like you and me) to determine where the bee parasite is spreading across North America.