and your heart skips a beat,

we’re on the same page.

Now, I have a question for you:

Do you remember Laura mentioning Thanksgiving in any of the Little House books?

I’ll let you think about it for a moment …

I suspect that a few lightbulbs may already be flickering above farmgirl heads,

but in case you’re drawing a blank,

I’ll fill you in.

(I can hear your tummy rumbling!)

… there is only one book in which Laura briefly mentions Thanksgiving:

On the Banks of Plum Creek.

“Grasshopper weather was strange weather. Even at Thanksgiving, there was no snow,” begins the chapter called “The Christmas Horses,” set in Minnesota, where the Ingalls family lived in a meager dugout home in a riverbank.

“Thanksgiving dinner was good. Pa had shot a wild goose for it. Ma had to stew the goose because there was no fireplace, and no oven in the little stove. But she made dumplings in the gravy. There were corn dodgers and mashed potatoes. There were butter, and milk, and stewed dried plums. And three grains of parched corn lay beside each tin plate.”

“Parched corn was good,” she wrote. “It crackled and crunched, and its taste was sweet and brown.”

Not a common staple on Thanksgiving tables these days, but frontier fare has not been forgotten.

If you’d like to whip up some prairie-style parched corn, dumplings, corn dodgers, and stewed plums this year to complement your Thanksgiving …

look to The Little House Cookbook: Frontier Foods from Laura Ingalls Wilder’s Classic Stories by Barbara M. Walker, who was inspired to research the litany of traditional Little House foods when her 4-year-old daughter wanted to eat “pancake men just like Laura.” 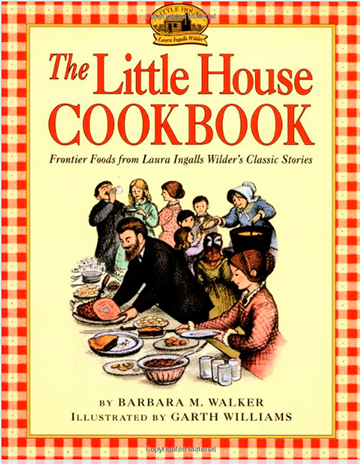 Want one more nibble of what Thanksgiving was like in Laura’s day?

Savor her reminiscences in “Thanksgiving Time,” an essay she published in The Missouri Ruralist on November 20, 1916.