Even people who get uptight at the mention of the “b” word are often more than okay with these beautiful and benevolent little beetles. 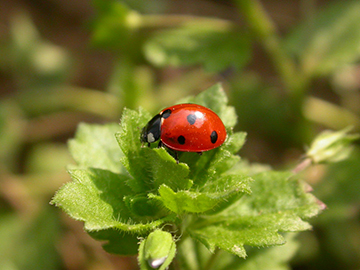 Of course, it doesn’t hurt that ladybugs are marvelous allies in the garden.

How Did the Ladybug Get “Her” Name?

Legend has it that during the Middle Ages in Europe, a swarm of aphids fell upon fields of crops, leaving desperate farmers with little choice but to implore the Virgin Mary for help. And what do you know? Legions of tiny crimson beetles soon landed, as if descending straight from the heavens. They began devouring the aphids and saved the crops. In gratitude, the farmers named their fortuitous visitors “Our Lady’s Beetles.”

Over 450 species are native here in North America (who knew?), and they can sport a surprising array of outfits: orange, yellow, pink, gray—even brown or black. 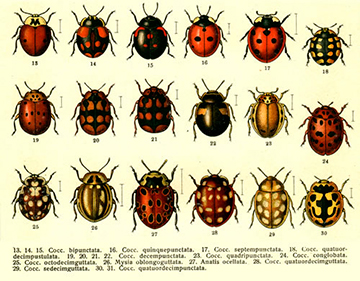 Gardeners and Ladybugs: A Love Affair

Aphids are the bane of many a gardener, and as luck would have it, ladybugs are excellent aphid eaters, both in their larval and adult forms.

FYI, these are ladybugs at three different life stages: 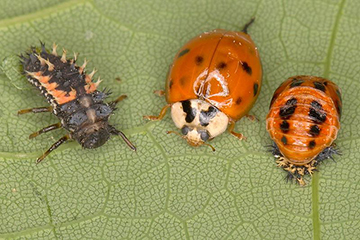 One little “lady” can consume up to 50 to 60 aphids per day, and it will also eat a variety of other insects and larvae such as scales, mealy bugs, leaf hoppers, mites, and soft-bodied insects. The eggs of the dreaded Colorado potato beetle and European corn borer are also on the menu.

“They are tremendous carnivores that can eat lots of significant agricultural pests,” says Doug Taron, curator of biology at the Peggy Notebaert Nature Museum in Chicago where ladybugs are used to naturally control pests in the museum’s butterfly garden.

Ladybugs lay hundreds of eggs in the colonies of aphids and other plant-eating pests. When they hatch, the ladybug larvae immediately begin to feed.

Get ‘Em In Your Garden

In recent years, it has become a popular notion to buy ladybugs from gardening catalogs and release them into home gardens. While this sounds like a great idea, it doesn’t really fly for three reasons:

So, instead of buying ladybugs, lure them naturally … 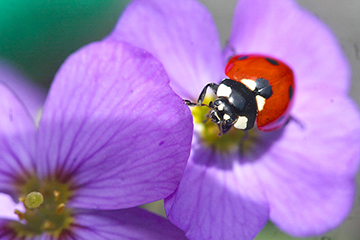 Photo by Maelfeyt via Wikimedia Commons

First rule of thumb: no pesticides. Chemical bug killers are not only harmful to ladybugs, but they also kill the ladies’ food sources, leaving them no reason to hang around your garden. Come to terms with the presence of aphids, and let ladybugs keep them in check for you.

Ladybugs supplement their insect diet with pollen and nectar, so if you plant some of their favorite flowers, they will find sweet reasons to stick around. 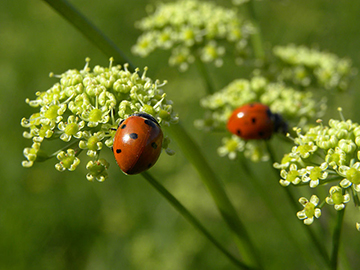 Photo by Haeferl via Wikimedia Commons

Over the past 20 years, several native ladybug varieties have become extremely rare due to competition from imported ladybugs. “This is happening very quickly and we don’t know how, or why, or what impact it will have on ladybug diversity or the role that ladybugs play in keeping plant-feeding insect populations low,” explains Cornell University entomologist John Losey.

Losey is the driving force behind the Lost Ladybug Project, which encourages people to act as “citizen scientists” by reporting ladybug sightings across the country. He hopes that the data will provide insight into protecting native ladies and the vital role they play in both wild and cultivated ecosystems. 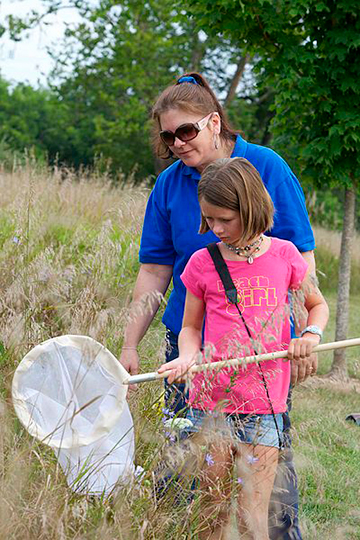