So what would you think if you ran across one of these big ol’ arrows? 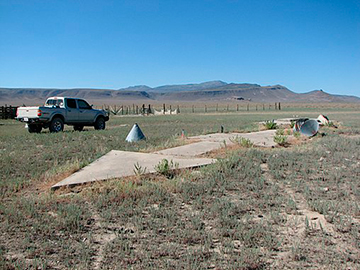 Actually, the last one isn’t far off.

These arrows were, in fact, a treasure map of sorts.

Though ixnay on the giants-ay … think aeronautics instead.

Prior to 1924, mail could take upwards of a month to arrive at its destination. The Pony Express, which solely delivered mail, was disbanded in 1861 as the Transcontinental Railroad took up the yoke and continued to improve the speed of mail delivery.

The railroad was completed from sea to shining sea in 1869, and until 1903, was the main means of mail delivery. That is, until the Wright Brothers completed their first successful flight and initiated the age of air travel. 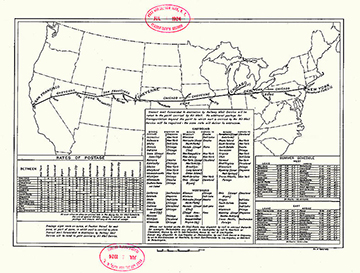 Needing no roads, train tracks, or animals, the advancement of air travel had just one hurdle to overcome: night.

Without high-tech navigation systems, a pilot could only fly during the day.

Like breadcrumbs for a pilot, a series of beacons was built and lit—one every 10 miles.

Here is one of those “breadcrumbs,” a 51-foot steel tower. 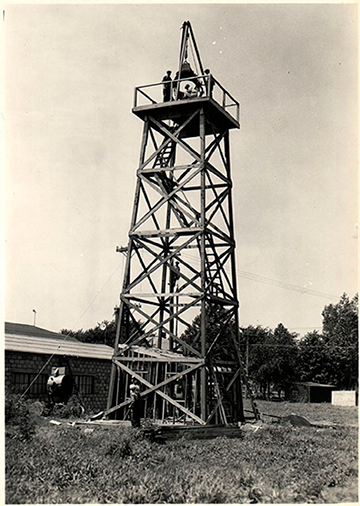 Below is a drawing of the structure. Each was lit by a million-candlepower rotating beacon. As long as pilots could see the concrete “yellow brick road,” they could fly by night. 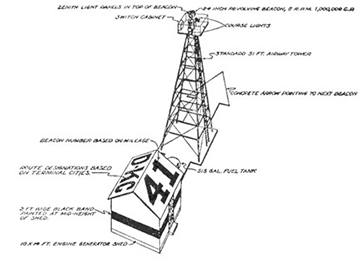 This allowed mail to cross the country in 30 hours or so, depending on conditions.

As fast as technology grows, the beacons were rendered obsolete by the ’40s. Most of the towers were torn down and the steel was used for the war effort, but hundreds of the yellow arrows remain.

The Western New Mexico Aviation Heritage Museum is in the process of restoring an airway beacon tower and its electric generator for visitors. More on that here.