By the time she reached her 9th birthday, Rachel Beckwith had already taken steps to change the world. This young lady was, by all appearances, a regular kid living in Issaquah, Washington. But behind her sweet smile, Rachel was determined. Brimming with generosity, she wanted more than anything to help improve other people’s lives, and she was using all of her girl gumption to get it done.

When Rachel, at age 8, learned about the drinking water crises in developing countries, she didn’t shrug off the knowledge and head out to play with her pals. She created a campaign to raise money for an organization called charity: water, a non-profit dedicated to bringing safe drinking water to those who need it. 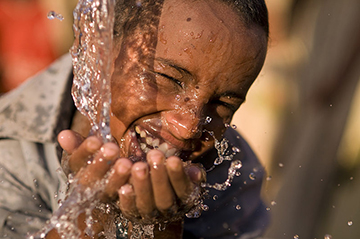 Rachel rallied family and friends to join the cause with this powerful statement:

“On June 12th 2011, I’m turning 9. I found out that millions of people don’t live to see their 5th birthday. And why? Because they didn’t have access to clean, safe water, so I’m celebrating my birthday like never before. I’m asking from everyone I know to donate to my campaign instead of gifts for my birthday. Every penny of the money raised will go directly to fund freshwater projects in developing nations. Even better, every dollar is ‘proved’ when the projects are complete, and photos and GPS coordinates are posted using Google Earth. My goal is to raise $300 by my birthday, June 12, 2011. Please consider helping me. Thank you so much!!!”

By June 12, Rachel had raised $220, a sum to be proud of, a sum that would help 15 thirsty people access clean water. Rachel was, by anyone’s standards, a hero.

But just weeks after her birthday, Rachel’s story took a tragic turn. She was severely injured in a car accident and died three days later. Incredibly, however, her dream did not die. In fact, it sprouted wings. News of Rachel’s efforts began to sweep the globe, and by September 30, her campaign had received more than $1.26 million, donated in loving memory.

We can all help keep Rachel’s dream alive by visiting Rachel’s Wish and giving a little—or a lot—to the cause she cared about so deeply. Perhaps an even more important gesture, though, is to share Rachel’s story with our kids and grandkids so that they, too, might be inspired to give.