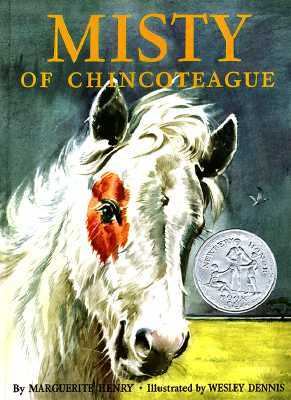 The warm summer sun has set me adrift to another place and another time. I’m compelled to visit a novel cherished by many girls of my generation: Marguerite Henry’s Misty of Chincoteague, published in 1947.

Windswept shores and wild ponies were Henry’s inspiration to pen this galloping tale, which takes place on the islands just off the coast of Virginia. (See my post about Chincoteague Island in Geography.) The ponies, rumored to have survived the wreck of a Spanish galleon, have run free for generations on Assateague Island, a slim arc of grass-stubbled sand that exists at the mercy of the Atlantic tides. In the book, siblings Paul and Maureen Beebe live with their grandparents on the more civilized Chincoteague Island, separated from Assateague by a narrow channel of ocean. The kids are drawn to Assateague and its ponies, and they are soon spellbound by one elusive mare that seems as wild as the wind itself.

When the Chincoteague community stages its annual Pony Penning Day (a roundup and auction of Assateague ponies), Paul and Maureen are determined to bring the mare home. Little do they know, the pony has a surprise in store that will change the course of their dreams.

Misty of Chincoteague is a sweet and simple story of pure ambition and the untempered human impulse to stake a claim on wildness. You can’t help but admire Paul for his gumption, and Grandpa Beebe will charm your socks off (I love his Southern dialect). I did find myself wanting to fire up Maureen’s inner farmgirl at times when she resigned to play second fiddle, but the characterization was a sign of the times. Take pride in how far we’ve come, ladies!

While this is an easy summer read, it’ll stick with you for years to come. If you read it long ago, you’ll relish the sensation of sand between your toes as you return to the islands of memory. This is a glimpse into a place and a time that I bet you’ll also want to share with a young reader you love. No violence or vampires here, just solid values and good old-fashioned adventure. There is also a film adaptation called Misty that was released in 1961. Well worth watching, but only AFTER you’ve read the book.