Are you a Downton Abbey fan?

So begins the saga you may be enjoying as much as I do:

If you’re not familiar, this PBS series is set in the fictional Downton Abbey, a breathtaking Yorkshire country house (read: castle), and follows the lives of the aristocratic Crawley family and their servants during the reign of King George V. 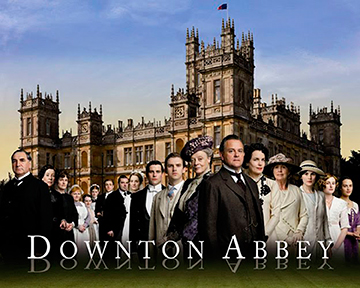 This show is well worth a cozy vicarious hour on Sunday evenings (9 p.m. my time PST).
Fellow fans will get a kick out of this little factoid I stumbled across the other day:

“As far away in miles and lifestyle as Downton Abbey may seem, there’s a close connection between northern Wyoming and the stately castle where the smash hit PBS series is shot,” revealed the Billings Gazette.

It sounds a lot like a made-for-TV movie plot, but the real Highclere Castle, which “stars” as Downton Abbey itself, is owned by the Earl of Carnarvon, who happens to be the first cousin of Wyoming rancher Paul Wallop.

As it turns out, Wallop’s great-grandfather Oliver was the son of the Earl of Portsmouth, but he was one of the period’s “remittance men,” younger sons of British families who didn’t stand to inherit a title or land. Many of these young swashbucklers, out to claim their own chunk of destiny, headed over the pond, landing in Montana and Wyoming in the 1800s, where they were subsidized by payments from home.

“Oliver first bought land near Birney, Montana, before buying the Canyon Ranch at Big Horn in 1889,” recounts the Gazette. “He also served in the Wyoming State Legislature … [but] when Oliver’s older brothers died without heirs, Oliver inherited the title of earl and returned to Great Britain.”

Get all of the delicious details here, and then bide your time until the next episode by delving into the traditional tummy-tempting dishes of the post Edwardian period with Downton Abbey Cooks.

“I want a good man for you, a brave man. Find a cowboy in the Middle West and bring him back to shake us up a bit.” Christmas at Downton Abbey, Robert Crawley to daughter Mary.