Only six, not less, not more.

Given my gift for gab, it might surprise you to know that perfecting a profoundly pared-down paragraph excites me. And I still haven’t figured out how to …

… text yet. Shaved sentences, deft deletions, eloquent edits—love ‘em! Words are wondrous, phenomenal, prodigious, miraculous, splendid, smashing, dazzling, jim-dandy, super-duper, ripping, tip-top. I could go on and on (really?), but there is also beauty in brevity. And so, without further ado, I come to my point:

Six-word stories tickle my fancy. (Did you catch the six count?)

That’s my confession for the day. (Another six.) Have you heard of this concept? (Six, again.) The six-word story isn’t really a new idea, but it is something of a fad these days. In an era of status updates and tweets, we’re becoming increasingly comfortable with speaking our minds in fewer lines.

Idaho’s very own wordsmith, Ernest Hemingway, as it turns out, would be proud. It is rumored that Hemingway was once dared to create a story in six words. He wrote, “For sale: baby shoes, never worn.”

Food for thought? In six words, Hemingway spurred countless imaginative journeys, leading readers and scholars to ponder the possibilities of full-fledged stories submerged beneath the snippet.

Finding great depths of inspiration within Hemingway’s groundbreaking “genre,” editor Larry Smith  founded the “Six-Word Memoir” project as a satellite of his online storytelling site, SMITH Magazine. In 2006, Smith announced a contest: submit your life story in six words. The flood of responses, ranging from hilarious to heartbreaking, was pared down to a collection of the most mesmerizing (including Smith’s own story, “Big hair, big heart, big hurry”). A craze of concision was born, and a book became, Not Quite What I Was Planning: Six-Word Memoirs by Writers Famous and Obscure, soon led to subsequent books, a calendar, t-shirts, and even a card game.

Obviously, I’m not the only one who can be wooed in six words. This concept is catchy. Are you feeling it yet? You can go to the Six-Word Memoir site, sign up, and—presto!—publish your own six-word story in the category of your choice (Life, Love, Moms, Teens, Work, etcetera). The secret is to make it personal without trying too hard. It’s amazing how much we can learn about each other in so few words.

Reached into my heart to fly! 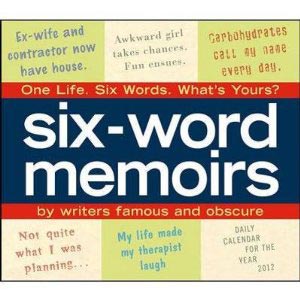