Prim Miss Polly O’Pinion, Ph.D. (a personal pal of our very own MBA Jane) was poised at a picnic podium, preparing her presentation for the impending Paper Doll Parade when she perceived a poke at her posterior.

“Pardon me?” she puffed, plainly peeved.

Just as she peered over her shoulder to pin down the prankster, her petticoats were pulled down, practically to her periwinkle pumps—preposterous!

Prim though she was, Polly proceeded to throw a punch at the perpetrator, whom she positively identified as the lecherous litigator Larry Lowlife, who was known for his improper proceedings both in and out of the courtroom. Alas, Larry put pedal to the metal and plunged headlong into the audience, where he promptly disappeared.

Perturbed, Miss Polly put aside politeness and proclaimed over the P.A. system, “I will prosecute you for this, you—you—pettifogger!”

Pettifogger:  one who practices pettifoggery or is prone to pettifogging, derived from the word

1. to practice chicanery of any sort

2. to bicker or quibble over trifles or unimportant matters (“Let’s not pettifog over pennies.”)

3. to carry on a petty, shifty, or unethical law business.

The term is totally unrelated to petticoats, but I couldn’t resist playing with it. I mean, just look at Larry, panting after Polly’s petticoats with all the panache of a … pettifogger! 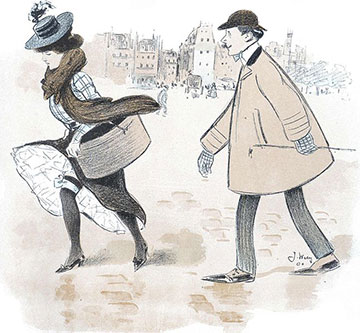 Leave a Reply to Eileen Widman Cancel Your Response