How about a little potty talk?

I can hear you now:

Possible … but I really did mean to say “potties.”

You see, up here in my northwestern neck of the woods, we now boast a six-block stretch of sidewalk that is paved with—you guessed it—potties. 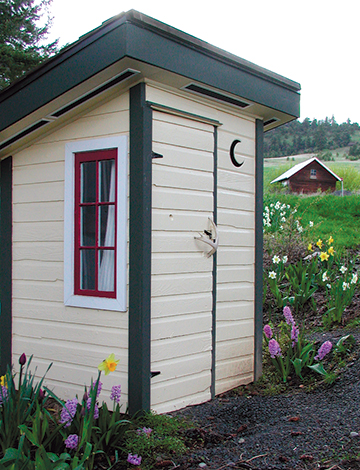 It’s a simple matter of sustainability.

The MKET project is the first in the U.S. to achieve a Greenroads certification based on a sustainability rating system for roadway design and construction. The system addresses water, environment, access, community impact, construction practices, and materials. In short, the Greenroads Foundation aims to revolutionize roadways around the globe in a big, green way.

Potties, it just so happens, were an integral part of the process in Bellingham.

The pots—400 of them—were castoffs. Waste, if you will.

When the Bellingham Housing Authority received a grant to replace water and electrical fixtures with more energy-efficient models, the old bowls got the boot. That meant close to five tons of porcelain were suddenly left without a purpose.

The pots were landfill-bound until they were found by Freeman Anthony, an engineer with the city of Bellingham who led the MKET project. He contacted his concrete supplier, who agreed to crush the commodes and mix the porcelain pieces into the trail’s pavement mixture.

Green genius, if you ask me. 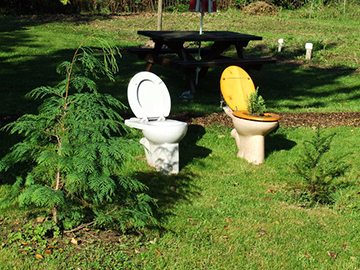 Besides the Poticrete, the MKET was fancied up with other features that helped earn it a shiny Silver Greenroads rating. It has the city’s first LED street lights as well as porous pavement parking areas and rain gardens (features which filter pollutants out of storm-water runoff and moderate water flow).

The moral of this story?

Get out there and make a difference because no brave, green idea should be flushed down the drain without being given a fighting chance.