The featured Merit Badge Awardee of the Week is … Barbara Roberts!

“Using MaryJane’s special recipe edition of her magazine, I tried out a few of her recipes for BakeOvers. Using what was at the end of the season from my garden, in a “must-go” manner, I put whatever I had in a base of sautéd garlic and onions and added crab meat which we had just bought. On top of that I put raw Havarti cheese which made it decadently wonderful

I took two of them (a dinner one and a dessert one) to two different Craft-in nights we had with the Farm Girls and let them try out the flavors.” 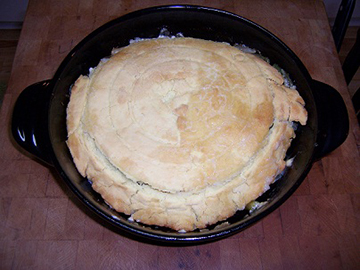 After playing with the dough a few times, I discovered that the easiest way to deal with it was to form it into a ball and then smush it with my hands into a relatively thick round and put it over the filling.

That worked better than rolling it out with a rolling pin or forming it into eight little balls and flattening them into rounds to cover the pan. The crust was surprisingly good and blended well with whatever filling I used.”