making do with some brew

I hear good news I get a little rush of happiness.

Don’t you love that feeling—knowing something wonderful or playful has happened out there in the world?

Amid chaos and crime, sometimes there’s a quiet gem of a story that shines through,

and makes us feel a bit brighter, lighter.

Take, for instance, this tale of two elephants …

Last month, a pair of middle-aged pachyderms was traveling by truck through Russia’s bitterly cold Novosibirsk region when their wooden trailer caught fire.

Jenny and Magda, ages 45 and 48, were evacuated and had to wait outside to be rescued in temperatures hovering around 40 below zero …

Fearing the worst, the elephants’ handler made the matrons jog in circles (picture THAT! Is there where we got the term “personal trainer?”) but was unconvinced that the activity would save them from freezing.

That’s when he resorted to a traditional Russian panacea:

He bought two cases from a nearby village and diluted it with warm water for Jenny and Magda to drink.

“They started roaring like they were in the jungle! Perhaps they were happy,” a local official told Russia’s Ria Novosti news agency. 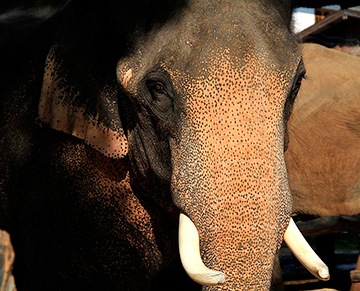 The elephants suffered a nip of frostbite on their ears and trunks but survived the cold until they were transported to a heated gymnasium in a nearby school. A few days later, Jenny and Magda, who are part of a Polish circus, reached their destination in the Siberian city of Omskand to begin rehearsing for circus performances scheduled for the New Year.

Technically, scientists say, alcohol only makes animals (and humans) feel warmer while actually lowering their core body temperature, but the director of the zoo reported that the elephants were not harmed by the vodka, and he’s convinced that without the FUN they’d had while slightly inebriated, they would have died of hypothermia or pneumonia.

I bet those girls were grateful for the care—and I suppose the vodka—that frigid winter day.

It reminded me of a TV special I saw many years ago, where cameras caught African animals of all kinds eating fruit that had dropped onto the ground from a particular type of tree. Problem was, the fruit had fermented and you guessed it, the animals got drunk. It’s hilarious to watch elephants, giraffes, ostriches, monkeys, etc. staggering about like drunken sailors.

How about you? Care to share a heart warmer?