My featured Merit Badge Awardee of the Week is … Deborah Meyer!

Deborah Meyer (dmeyer, #4099) has received a certificate of achievement in Each Other for earning an Expert Level Civic Heritage Merit Badge!

“I researched our courthouse in Carthage, Missouri. It is one of the oldest buildings in our area. Jasper County’s first courthouse, a one-story building on the north side of the square in Carthage, was built by Levi H. Jenkins for $398.50. He completed the building June 29, 1842. 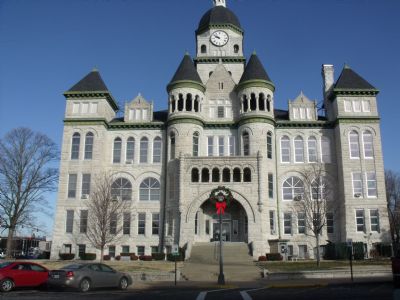 The square also was the site of the next courthouse. Plans were presented to the court in July 1849 by John R. Chenault, superintendent. He was allowed $15 for the plans and specifications, which were furnished by S. W. Walcott; however, the order was rescinded Nov. 28. Gabriel Johnson then built the courthouse; the record is not clear about whether Walcott’s or Johnson’s plans were used. Costs of the two-story, brick building came to $4,760. The first story was used for Circuit Court room and offices, the second story for jail and offices. The courthouse was completed July 10, 1854. Used as a hospital during the Civil War, it was destroyed by fire in October 1863.

For the next 30 years the court moved into a number of temporary quarters: a school, a remodeled jail, a two-story building on the west side of the square and a Baptist church converted for the court’s use.
Officials took steps in 1891 toward building two courthouses, one, a joint Carthage-Jasper County project costing $100,000, the other, a special $20,000 project at Joplin for holding Circuit Court. This did not materialize because Webb City residents, who had not approved of the proposition, challenged the election on the basis of a technicality in the voting procedure. The protest ended in the Supreme Court, where the decision required that the issue be resubmitted to the people. In May 1893, the tax funding the building again received an affirmative vote.

The city and county shared costs equally for the $100,000 Carthage courthouse, and the city was to be granted the use of not less than four rooms. Officials accepted the plans of architect M. A. Orlopp, residing in New Orleans at that time, for a 106-by-133-foot building constructed of native Carthage stone.

The large appropriation and opportunity to bid on two courthouses at the same time attracted at least 16 architects, some with national reputations. According to the Carthage Press, Orlopp had built 10 or 12 courthouses, the most notable in Dallas, Texas, and New Orleans, Louisiana, both costing several times Jasper County’s appropriation. L. W. Divelbiss, Olathe, Kansas, submitted the low bid for Jasper County’s courthouse of $91,600.

The cornerstone was laid Aug. 21, 1894. However, a strained relationship had developed between the architect and the court-appointed superintendent of construction, Nelson L. Damon. The dispute spread to the community, creating factions and resentment. Construction proceeded at such a slow pace the townspeople became impatient, then angry. At the height of tension one group called for Orlopp’s dismissal. Damon had reservations about Orlopp’s specifications; Orlopp did not trust Damon’s judgment and threatened to resign if Damon continued to represent the court. The newspapers carried accounts of the dispute, quoting both sides, but generally sympathetic to Damon.

In spite of the problems of conflicting personalities and questions of judgment, the building was dedicated Oct. 9, 1895. The courthouse, one of Missouri’s finest, has remained a source of pride for Jasper County ever since. It is now included on the National Register of Historic Places.

Many people travel through our area just to visit our courthouse. I will be posting pictures of the inside of the courthouse on my blog as soon as I can. http://countrygirlforever-deborah.blogspot.com”