Today, I’m globetrotting from the BaseCamp hostel in Bonn to the Beehive Hotel in Toronto … 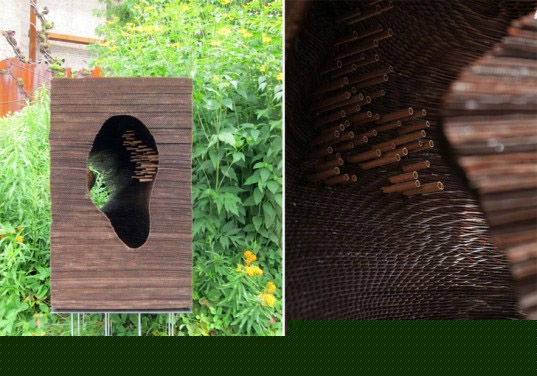 The Beehive Hotel was a winning entry in the Design by Nature public art competition in Toronto, born as a result of the designers’ concern for North America’s recent rash of bee colony collapses.

“The goal of this installation is to encourage pollinators in the Toronto region to inhabit and reproduce as well as create an art project that would have a contemporary form and stand as a beautiful beehive sculpture,” explain sisters Aleksandra and Yvonne Popovska, the hotel’s designers.

Unlike many beehives, this one welcomes mason bees, solitary critters that nest in nature’s varied cracks and crevices. They don’t make honey, but they’re prolific pollinators, and they rarely (if ever) sting. Dave Hunter, a mason bee expert in Woodinville, Washington, calls mason bees “cuddly” and praises their pollination prowess. “A honeybee might pollinate 15 flowers per day,” he says, “while a mason bee can pollinate up to 2,000.”

PopTarts’ Beehive Hotel encourages area mason bees to take up residence because it replicates their preferred habitat with the thousands of tiny “rooms” created by its corrugated cardboard walls.

That’s right—the hotel is crafted of 100% recycled cardboard that was laser cut and stacked to create a natural-looking hive structure.

“Bees don’t like to be too hot,” explains Aleksandra, “and the cavity creates a nice protection for them, like the hollow in a tree.”

But how does it withstand the weather?

The hive has been waterproofed with—you guessed it—beeswax (locally sourced, of course)! Once the hive was assembled, it was coated with melted beeswax and heated until the wax was absorbed by the cardboard.

The hive was on display throughout the summer in the gardens of Toronto’s Evergreen Brick Works, an environmentally focused community center, and bees started nesting inside the tubes with weeks of its installation.

I suspect this design may take wing and spread to more urban gardens in years to come. I’d love to have one here at the farm.