Collinsville, Illinois, is known for its catsup … bottle, that is. 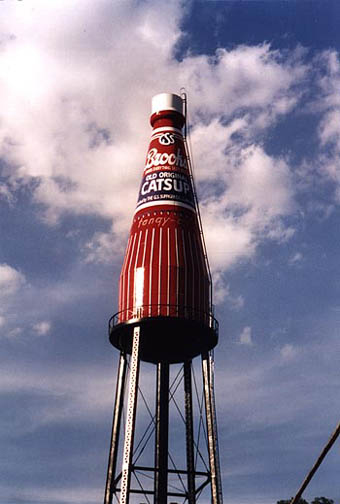 Since 1949, “The World’s Largest Catsup Bottle” has drawn visitors from across the U.S. to marvel at the kitschy, 170-foot-tall roadside attraction. The bottle itself is 70 feet tall, standing on a 100-foot-tall steel base. The bottom of the bottle is 25 feet in diameter and would hold 100,000 gallons of catsup, but has instead served over the years as a water tower. It was built to mark the adjacent catsup bottling plant for “Brooks Old Original Rich & Tangy Catsup.”

The tower was restored to its original appearance in 1995 with over $100,000 in donations and named to the National Register of Historic Places in 2002.

But it’s now for sale, along with the adjacent warehouse. How much does the world’s largest catsup bottle cost? A rich-and-tangy half-million!