For this week’s Each Other/Big Kid Now Expert Level Young Cultivator Merit Badge, Andy asked me to help him by shadowing him as he shadowed another.

I know. Sounds shady. Like a film noir, Humphrey Bogart/Lauren Bacall, cue the Magnum P.I. theme music shady. But in order to earn his badge, he needed to follow in the footsteps of someone (a mentor or Farmgirl Sister) who was working in the profession he was most interested in. He had waffled a bit, I admit, while earning his first two badges in this category, but he finally settled on what he thought was his dream job.

He added the Extraordinaire part, as I’m sure you deduced.

I knew he was coming at it from a purely preteen, adolescent, constantly hungry, sugar-crazed, glazed and frosted, point of view, but I figured he could learn that the hard way. 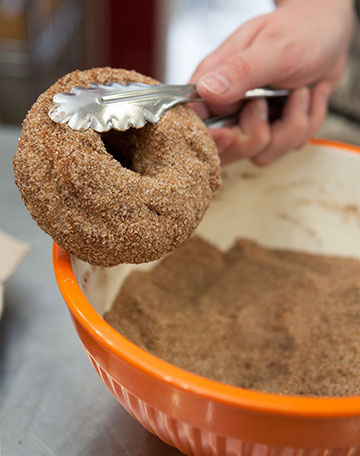 Also, I enjoy a good maple bar like any red-blooded American farmgirl, so I didn’t mind waiting in the wings. The sprinkled, deep-fried, apple fritter wings … where was I?

The neighborhood baker at the local donut shop was only too happy to oblige Andy’s request. In fact, I thought I heard something mumbled manically under his breath about slave labor and needing the fryer deep-cleaned, but I couldn’t be sure. Probably just my imagination.

Bright and early the next morning, we were off. And by ‘bright and early,’ I of course mean, in the dead of night with nothing but moonlight to light our way to the donut shop. Andy resembled a cast member of the Walking Dead, and I must admit, I didn’t look too good myself. Nobody looks good at 3:30 a.m., except maybe the aforementioned Bogey and Bacall. But they had makeup artists and better lighting.

Mr. Donut Maker and Baker Extraordinaire Senior was already up and ready to go. I’m not sure what his veins are pumping with, but I’m fairly certain it’s caffeine and sugar, not the normal blood the rest of us have. I got myself to the coffeemaker faster than you could say ‘good morning, sunshine’, and when I couldn’t find a mug fast enough, I used a large mixing bowl.

It was either that, or put my lips directly beneath the coffee spout and guzzle. And I am a lady, let me remind you. Most of the time.

Mr. Donut Maker and Baker Extraordinaire Junior found some energy somewhere in that gangly body of his, and jumped right in. He had been hoping for a hot breakfast of chocolate-glazed goodness before any actual work, but one narrow-eyed squint from his new boss kept him on the straight and narrow. He was put to the test by cleaning out some ovens.

He spent half the time reenacting the witch scene from Hansel and Gretel until Mr. Baker plugged his donut hole with a pastry just to keep him quiet.

All in all, it was one long day … that somehow was over by 2 p.m. Baker’s hours are a thing not to be taken lightly.

Me, I take mine with extra sprinkles and a mixing bowl of strong coffee. Because I am a lady.