Can you guess the snowiest place on earth?

When the question occurred to me, I imagined some lofty summit in the Himalayas, or maybe a powdered peak in Alaska. Greenland perhaps? Canada? Siberia?

Nope, none of the above. 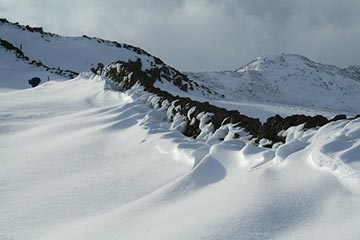 As it happens, the snowiest place on record is not very far from my home territory; it’s located “next door” in Washington State. And you’ll never believe its name…

Paradise! (I live at the base of Paradise Ridge, so I’m partial to the name.)

That’s right. Paradise, Washington. This alpine wonderland is an area on the south slope of Mount Rainier at a relatively modest elevation of about 5,400 feet. It encompasses Paradise Valley and Paradise Glacier, which is the source of—you guessed it—the Paradise River.

Interestingly, Paradise was not named during a record-breaking snowfall (hard to believe, right?). It was christened one balmy summer in the late 1880s by the Longmire family, who traveled West in the first emigrant wagon train to cross the Cascade Mountains and established one of Rainier’s first settlements. Rumor has it, one of the women in the Longmire family discovered the paradisaical mountain valley on horseback. Upon seeing the meadows abloom with wildflowers, she made the historic proclamation, “Oh, what a paradise!” 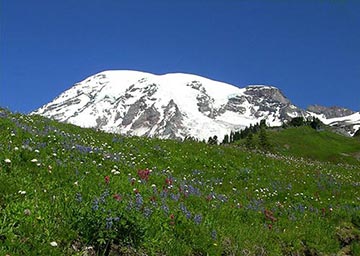 The Longmire woman’s impression echoed the legend of the local Lummi Indians who claimed that when Mount Rainier abandoned Mount Baker, her husband, she took the most magnificent flowers and fruits for herself. And years later, John Muir called Paradise Valley “the most extravagantly beautiful of all the alpine gardens I ever beheld in all my mountaintop wanderings.”

All that beauty and a lion’s share of snow to boot. According to the National Park Service, Paradise is the snowiest place on Earth where snowfall is measured regularly. In 1971, a whopping 93.5 feet of snow fell throughout the winter, setting a world record. Usually, from November to late May, you can expect to find anywhere from 10 to 20 feet of snow on the ground, with an average winter snowfall of around 53.4 feet.

If you’re a snow buff who’d like to “drift” up to Mount Rainier for cross-country skiing, snowshoeing and snowboarding, here’s where you can plan your visit to Paradise.