There is nothing more glorious than a good cause,

(stay with me here)

a good cause that is launched by a child like Neha Gupta.

Neha was only 9 years old in 2005 when she created Empower Orphans, a grassroots campaign devoted to helping orphaned children cultivate self-sufficiency around the globe.

Among Neha’s family, it has been a tradition to celebrate birthdays by taking food and gifts to orphaned children in their hometown in India. Although Neha has grown up in the United States, she has had the opportunity to travel to India and participate in this tradition. 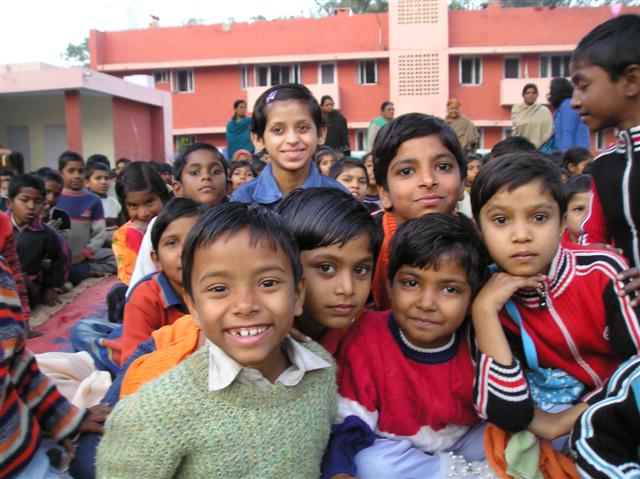 The experience of meeting kids who had no families was life-changing for young Neha.

“I remember the moment that I was talking to a girl of the same age; she wore tattered clothes and her face was covered in a thin black layer of dirt,” Neha, now 17, recalls in an article she wrote for the Huffington Post. “As she showed me around the orphanage, we first went to her room. It wasn’t exactly her room though … she shared it with 10 other girls. As I walked in, all I saw was an empty room with a single sheet on the ground. I asked in a confused manner, ‘This is where you sleep? Where is your bed?’ She looked down as she spoke and said, ‘This is our bed … We sleep on the ground. It does get very cold in the winter, but we manage.’ I was absolutely shocked.”

Sympathy wasn’t enough for Neha, though.

She needed to act.

Her passion to help blossomed into Empower Orphans, which aims to provide orphans with better healthcare, food, clothing, educational opportunities, and useful items so they can find a path from helplessness toward becoming fully capable human beings.

Neha has raised more than $1,000,000 so far for the creation of libraries and computer labs as well as the donation of water-purification systems, sewing machines, bicycles, and more to hundreds of kids.

Her current efforts that need funding include:

“I love helping these children so much! It is an amazing feeling to see the change that you can make in their lives as they grow,” Neha says. “I am definitely very happy with how much my efforts have grown; of course I am hoping that we keep growing and that more people see how important it is to help these children.”

If you would like to help Neha accomplish her gloriously good cause, you can make a direct donation (as little as $25 can educate a child for an entire year), purchase specific items for orphans, or you can buy handmade gifts from the Empower Orphans online store. One hundred percent of the profits are donated directly to the children that need them. 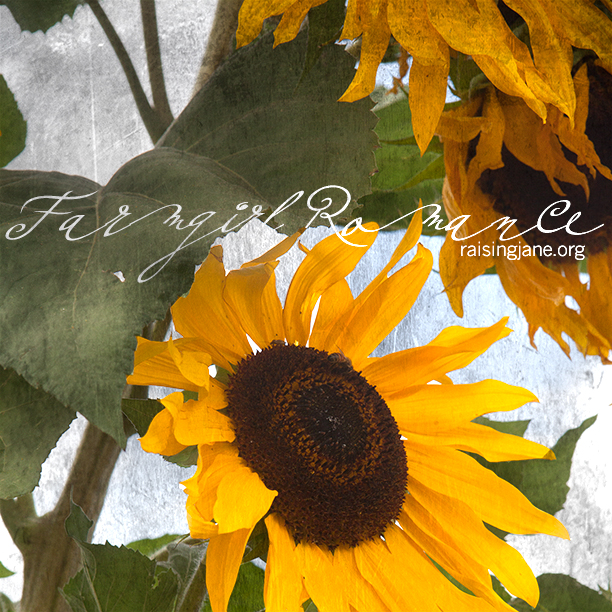 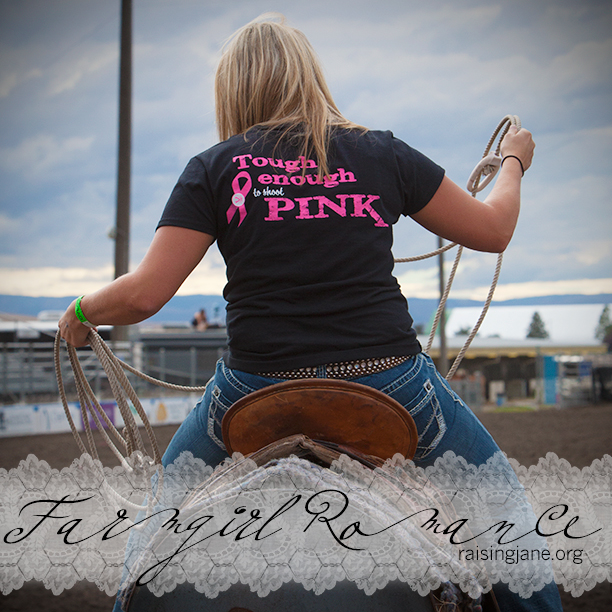 Chicks n’ Chaps, a rodeo event to fundraise for the fight against breast cancer, was held a week ago in Lewiston, Idaho, and oh boy (like oh BOYS in pink shirts!) was it a fabulous event.

I had a previous engagement, so I sent my food photographer, Ace, and graphic designer, Saralou, and they came back with lots to show and tell … 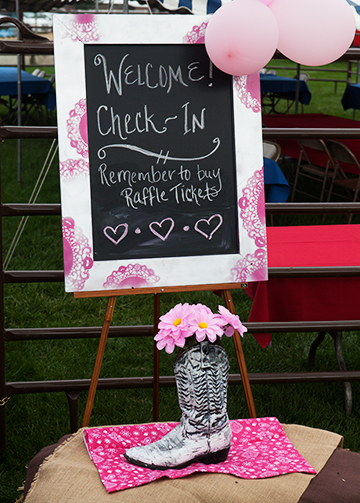 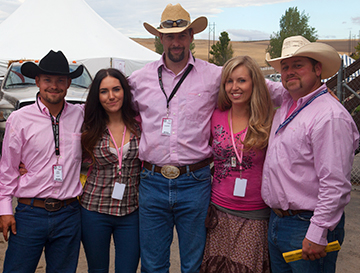 There was posing with the cowboy voluntees. Many of whom were riding, roping, and bulldogging in the night’s events. 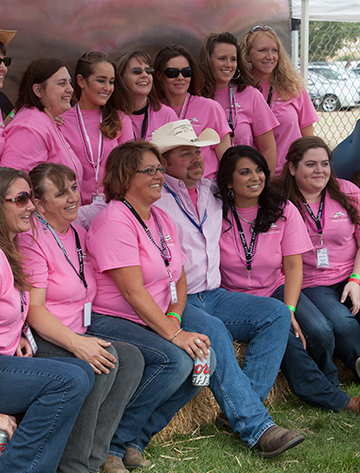 Lots of great swag was given out. I sent along my MaryJanesFarm water bottles (with pink writing!) to be added to the list of great goodies.

END_OF_DOCUMENT_TOKEN_TO_BE_REPLACED 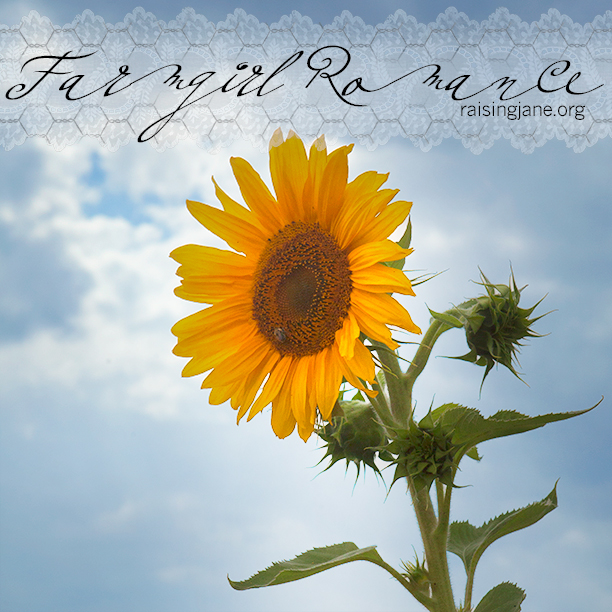 They sneak out into the wee hours of the morning. They bring along their ritual gear—flour, eggs, and pans—and get to work.

They are the 9 Nanas.

And their story became an Internet sensation.

What do these nine women have up their sleeves (other than the occasional forgotten spatula)?

An unending desire to assist those in need.

The 9 Nanas have been slipping around the corners of your supermarket, sleuthing at coffee shops, and sneaking around your beauty shop …  looking for folks who’ve been down on their luck.

It all started with MaMaw Ruth. MaMaw and PaPaw are the grandparents who raised four of the women when their mother passed away. They also took in Pearl when her parents fell on hard times.

MaMaw read the obituaries and liked to send off one of her special pound cakes to a grieving family—who, oftentimes, she didn’t know.

Inspired by MaMaw’s random kindness, the ladies wanted to give back the way she had given to them. So, during their weekly card game of “Broads and Bridge,” they came up with a plan.

“One of the sisters suggested that we should all start doing our own laundry and put the money we saved to good use. I admit, I protested at first. There’s just something about laundering that I don’t like. But I was outnumbered! So among the nine of us, we’d put aside about $400 a month and our husbands never noticed a thing. Their shirts looked just fine.” 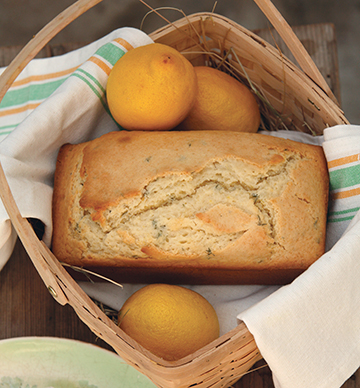 Like secret agents of kindness, they gave new meaning to the phrase “drive-by.” They’d cruise through low-income neighborhoods and look for houses with the lights off, which indicated the power bill hadn’t been paid.

So, only needing an address in their area, they’d go ahead and pay the bill. The next morning, they’d sneak one of MaMaw Ruth’s special pound cakes to the door with a little note.

After three decades of listening in and helping those in need, well, something had to give …

Mary Ellen’s husband began to notice things like strange large withdrawals from their account, and unexplained miles on the car.

Fearing the worst, Mary Ellen called the ladies over to spill the beans. They gathered the men together and shared it all … the laundry, the cakes, and even the secret drive-bys.

With the secret out, they soon told their children and were encouraged to start selling the pound cakes online, using the commercial kitchen in the restaurant of one of their sons.

They’re still up at the crack of dawn baking love into each cake—and are out before the staff arrives.

They were able to hire a happiness coordinator (whose identity is secret, the better to eavesdrop with) and began taking orders online for MaMaw Ruth’s pound cakes—all proceeds going to their non-profit Happiness Happens.

The original organic, from scratch, vanilla-bean cake recipe (an heirloom that was passed down from Grandmother Mary to MaMaw Ruth and then from MaMaw Ruth to the girls) is still used today.

They were recently able to donate linens, pillows, and personal-care products—$5,000 worth—to a shelter that assists survivors of domestic violence.

As they expand, they don’t forget why they started. They still keep a trusty phone book on hand to send cakes to complete strangers, and they keep their ears open for those in need.

“Not everyone is as lucky as we were to have MaMaw and PaPaw to take care of them, to fix all those things that are wrong.

“This is our way of giving back,” Mary Ellen said. “We want people to know that someone out there cares enough to do something. We want to make sure that happiness happens.”

When women weave their hearts and strength together to form one contiguous fabric, they create a magical kind of security, sheltering one another from storm and strife. 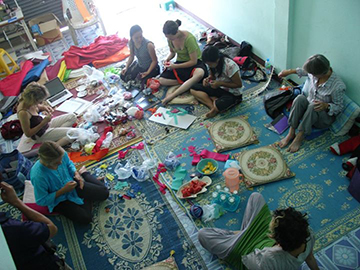 Nowhere is this phenomenon more apparent than among the women of WEFTshop. 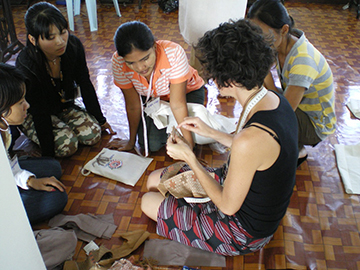 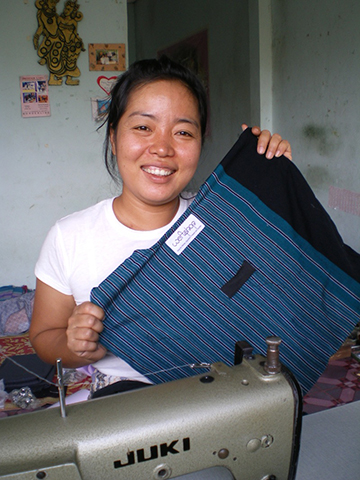 WEFTshop is a non-profit organization that supports refugee women from Burma who are living on the border of Thailand by developing their skills as textile artisans. 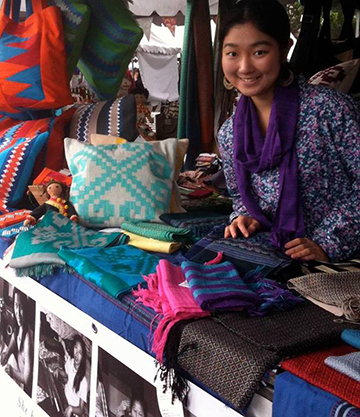 The women, who have fled persecution by the Burmese military regime, are able to earn a fair wage in a safe environment by using traditional hand weaving, appliqué, and metal beadwork skills to create beautiful textiles.

According to WEFTshop’s three fabulous founders, “Buying Weftshop’s handwoven textiles and handmade products helps support women and their families to buy nutritious food, medicine, and other essential household goods so important to achieving a basic standard of living … Our aim is to support cottage industry capable of delivering sustainable income while also promoting traditional textile skills.” 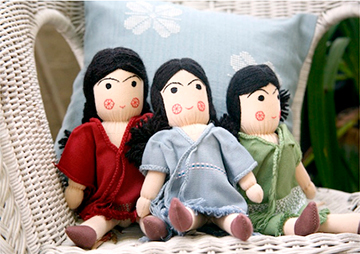 Photo courtesy of The Shop for Change http://www.theshopforchange.com

Shop the entire collection at The Shop for Change.