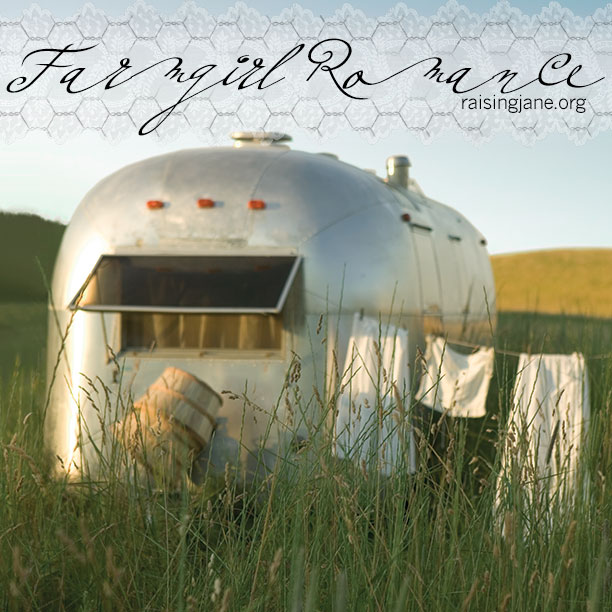 It’s that time of year …

My sister and I can’t wait for warmer weather to get outside to play. (Game of horseshoes … with a pair of warm winter gloves, anyone?) We’ve read all the books we own many times. We’ve played all of our board games over and over again. How about this for entertainment? 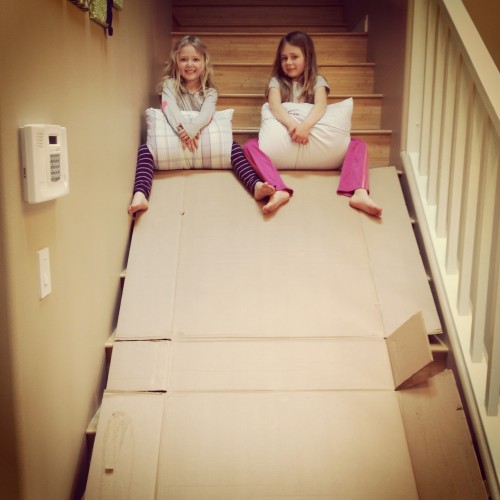 Stair sledding is way fun and the extra-big box Daddy found sure helped. And while we’re waiting for spring a tad bit impatiently, here’s one of our favorite reads (just in case you don’t have a massive box for stair sledding). 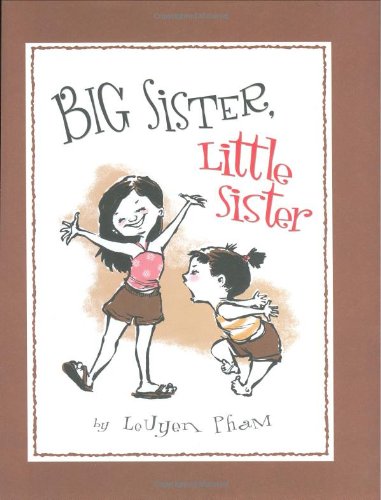 It’s a good reminder that my sis and I make a good team. And Mia loves the line that I will never be better than her at being the little sister. It’s true. She’s also more fearless and faster on the stair slopes!

I’ve always loved countdown calendars, but in the past, I’ve only let my passion for them find a home during the Christmas season. The first time I flipped through the pages of Countdown Calendars, I was dazzled out of my Advent-Calendar-for-Christmas rut and treated to a myriad of traditional and unique projects designed for all sewing levels. 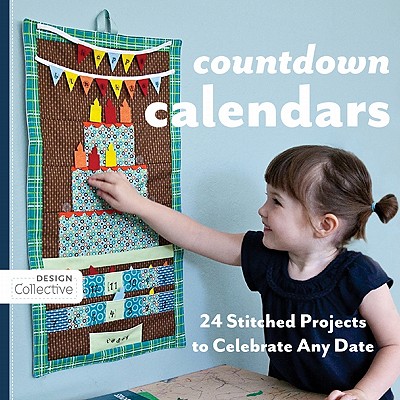 Besides helping to reward patience and build excitement around anticipated holidays, countdown calendars can be used to celebrate any special event in life. Consider making a birthday countdown calendar, where each day’s passing is marked by adding a candle to a birthday cake. Or for your next big vacation, count the days until you leave with a calendar housed inside a suitcase and decorated with the theme of your destination. And don’t forget the little events that make life special, too. Use a countdown calendar to record the progress of a weekly goal or help your family keep track of their chores, or create one to post a sweet message to your loved ones every day of the week. And really, who doesn’t adore a piece of hand-crafted loveliness hanging on their wall reminding them to celebrate? 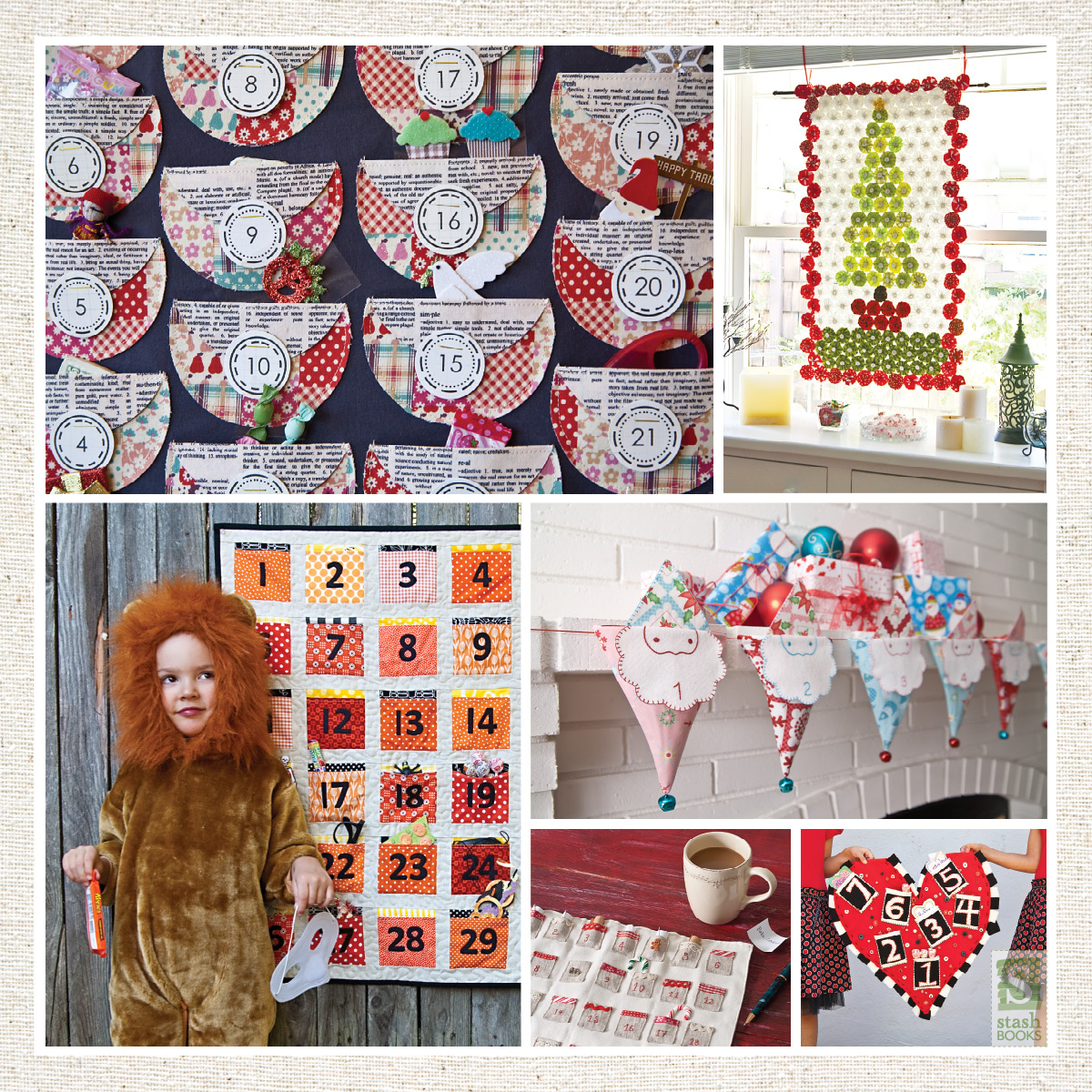 Countdown Calendars provides 24 of these project ideas and well-written instructions for each, complete with supply lists, patterns, and tips for assembly. The editor also includes a picture and short biography of each artist with their projects. I really like knowing a little bit about the person behind the creative genius. The fun fabrics and pieced designs in the photos provided just the right amount of eye candy and left me dreaming of projects I might attempt. Now that spring’s officially here, I might have to start the countdown to summer for my first project! 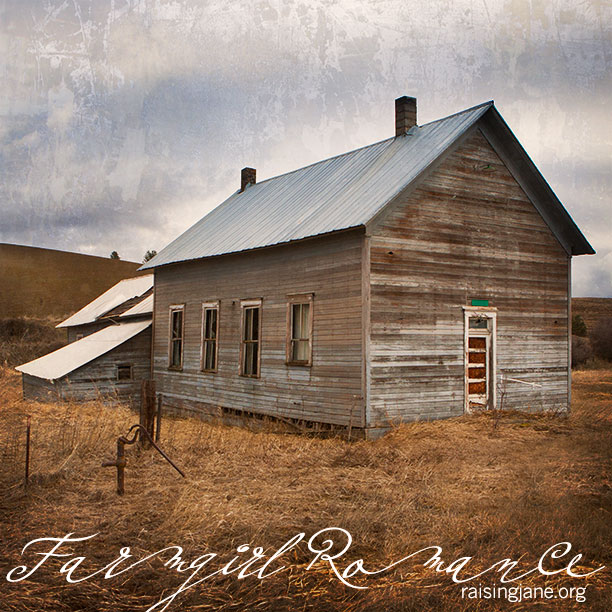 My newest book, Milk Cow Kitchen, (due out June 1) is now available for pre-order from my farm’s website (MaryJanesFarm.org).

It comes autographed, kissed?, and with a free Have A Cow bumper sticker (doubles as a bookmark). With 400 pages and more than 1,000 photos, I’m still in recovery mode. Holy cow, this book kicked my dairy-air. 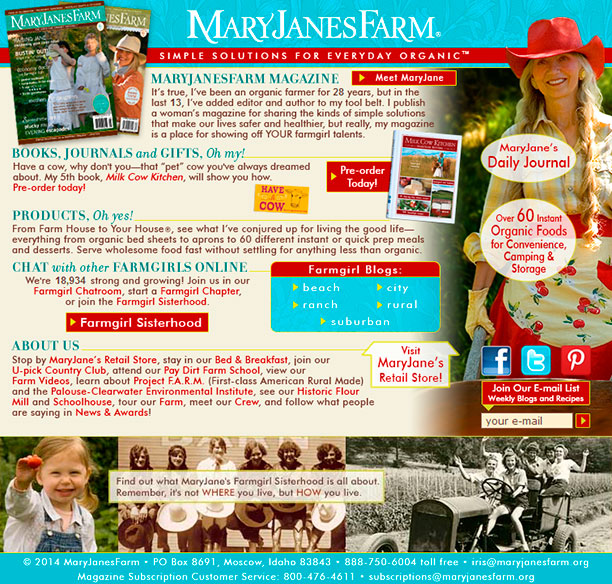 I hope you got the double meaning of sporting a Have A Cow bumper sticker on your vehicle. You know, HAVE A COW WHY DON’T YOU?! to that guy who rides your bumper. 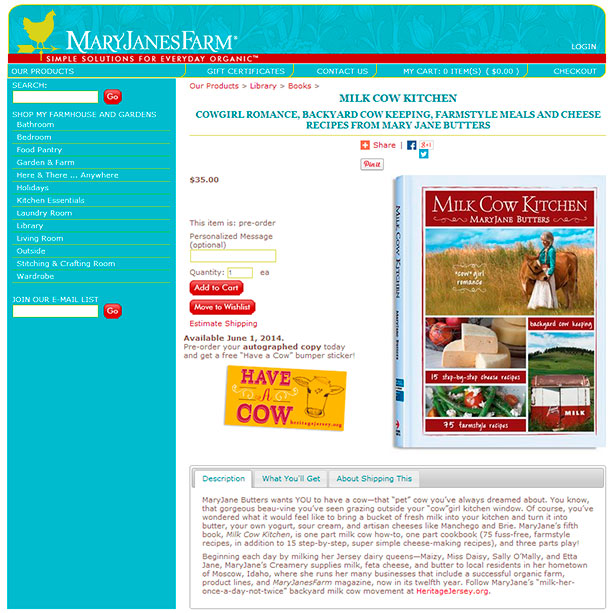 And here’s the back story that goes with my book …

MaryJane Butters wants YOU to have a cow—that “pet” cow you’ve always dreamed about. You know, that gorgeous beau-vine you’ve seen grazing outside your “cow”girl kitchen window. Of course, you’ve wondered what it would feel like to bring a bucket of fresh milk into your kitchen and turn it into butter, your own yogurt, sour cream, and artisan cheeses like Manchego and Brie. MaryJane’s fifth book, Milk Cow Kitchen, is one part milk cow how-to, one part cookbook (75 fuss-free, farmstyle recipes, in addition to 15 step-by-step, super simple cheese-making recipes), and three parts play!

The Forty Rules of Love

“Let yourself be silently drawn by the strange pull of what you really love. It will not lead you astray.” – Rumi

Most of us are familiar with Rumi’s quotes on love and life. I never tire of his visionary quotes. The fact that this poet and theologist from the 13th century has said so many things that resonate with little old me … well, intriguing. I was thrilled when the novel based on the woes of Rumi’s love, The Forty Rules of Love, by Elif Shafak, was picked as our recent book club read. Not only is Elif Shafak the most widely read woman novelist in Turkey, but the story of Rumi and his love completely intrigued me. 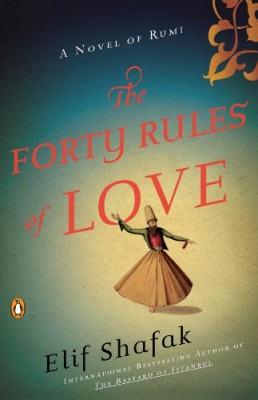 I’m always up for a novel based on an intriguing character from the past. In her novel, Shafak weaves two vastly differing narratives together. The first takes place in the 13th century when Rumi encounters his spiritual equal and wandering dervish, Shams. The book details how their relationship transpires and intertwines with the townsfolk and all of those who followed Rumi’s teachings. The other is of Ella in modern-day Boston and her encounter with a far-off author, Aziz, who writes of Rumi and Shams’ story. Both stories are about love and how it unfolds in unexpected ways: Rumi and his love for Shams and what Rumi is willing to do for that love … Ella and her love for Aziz and what Ella sacrifices.

I loved Rumi and Shams’ story. The characters were compelling, dynamic, and believable. Ella and Aziz’s story was less believable for me. That Ella—an unhappy, cheated-on housewife—decided to change her course was understandable (although permissible is another discussion). But for the worldly, spiritual Aziz to fall for her, was too far-fetched for me.

In the end, the paralleled awakenings of the characters in the novel were still worth the read, and the story of far-off lands and times and loves was so enjoyable, I happily read Shafak’s novel to the finish and would read another of her works. But I hope she leaves out the modern-day tie-in next time.

“You’re never too old, too wacky, too wild, to pick up a book and read to a child.” What better way to celebrate Dr. Seuss than with a day of reading. 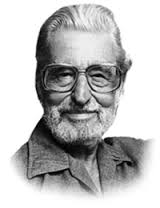 In honor of Dr. Seuss’s birthday on March 2, students, teachers, parents, and grandparents nationwide will pay homage by reading book after book in honor of National Read Across America Day. Mia’s teacher is celebrating with their 2nd Annual Book-a-Bunga Day, and the kids are encouraged to wear their coziest pajamas and bring their favorite blankies, teddies, and books. The lunch ladies will even be serving up green eggs and ham for lunch! Mia has been talking about this author’s birthday for weeks.

“Mom, did you know Dr. Seuss is an author? Do you what an author is? A book writer!” my Mia has said over and over in recent weeks. 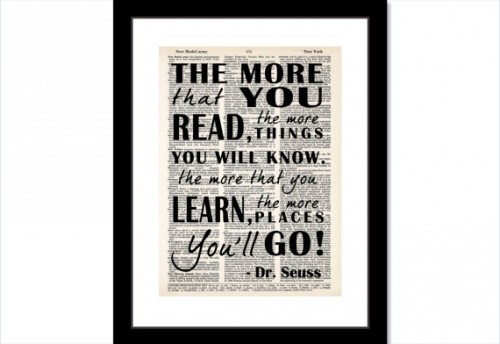 We know many of his stories by heart, read a particular pick every year at Christmas, and might own all the movies made from his marvelously rhymed works. But while they’re all such fun for an adult to read aloud, they address so many pertinent life lessons for children and adults alike. 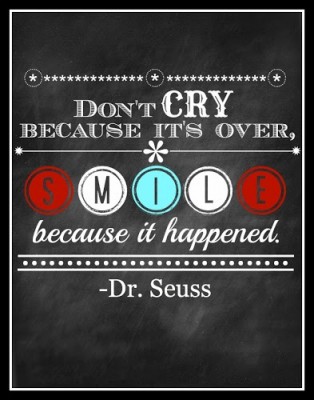 “Don’t cry …” My favorite of Dr. Seuss’s reminders. If you don’t have a Dr. Seuss book nearby, pick up anything with words and honor an author. They matter.

“Love is in the air. Just as the New York Times bestseller Unlikely Friendships documented incredible stories of interspecies bonds, Unlikely Loves offers a heartwarming look at animals who have a deep, loving attachment to each other.” 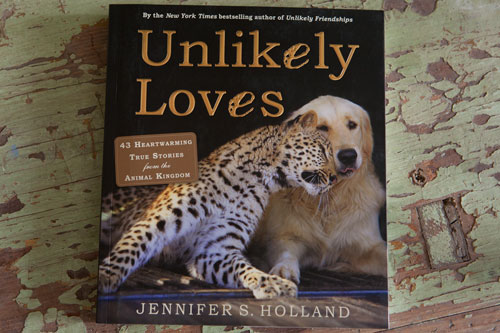 Author Jennifer S. Holland interviewed scientists, zoologists, and animal caretakers from around the world. You don’t want to miss reading about the girl and the moose. 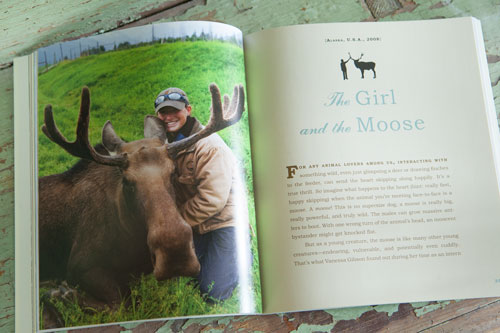 Or the hen and the pups. 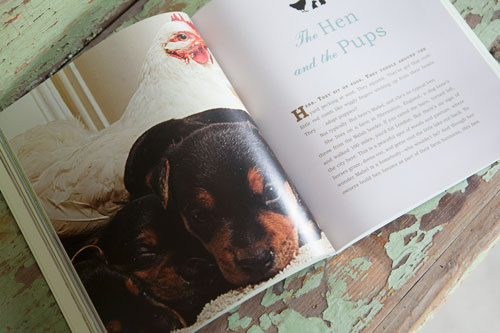 Or miss a good happy cry when you get to the part about the Dalmatian who cares for a motherless newborn lamb. 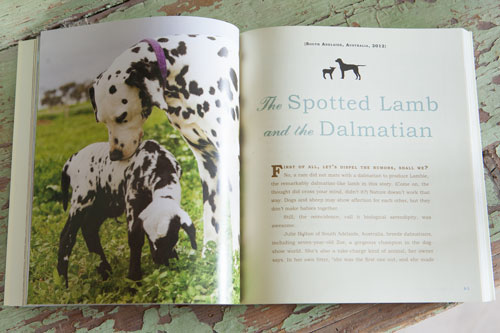 With 43 stories, Unlikely Loves shows us that love means never having to say you’re different.