Have you been in a conversation lately and heard any rendition of jury-rigged? I was in a conversation the other day when I heard “jimmy rigged” for the first time, so I decided to figure out which one is right …

and discovered the saying has quite the storied history. Turns out “jury rigged” was a sailing term that most likely originated near or before the 17th century. When a mast was damaged, due to a storm, battle, or wear-and-tear, it would need to be “jury-rigged” back into working condition. The connection between the word and sailing itself is unclear, but perhaps “injury” combined with “rigged” has some credence. Hmmm, I always thought it derived from a rigged jury. “The jury was rigged and so is this contraption.” 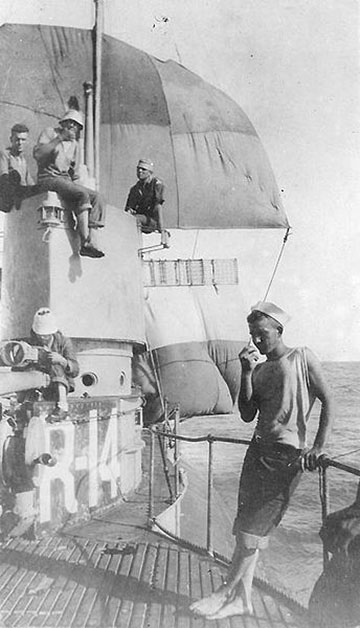 While searching for the missing USS Conestoga (AT-54) southeast of Hawaii, the R-14 lost her powerplant. As repairs were unsuccessful, her crew rigged a jury sail, made of canvas battery deck covers, to the periscope and sailed her to Hilo. She arrived there on 15 May 1921, after five days under sail. Courtesy of Wikimedia Commons. Kbh3rd

The alternative term “jerry rigged” found its footing in World War II. To keep equipment functional toward the end of the war, the axis would oftentimes resort to scavenging for parts. British troops referred to a German as a Jerry. Thus, the term “jerry rigged” was embraced to refer to patchwork jobs.

The new-age version of this reference would be “jimmy rigged.” This term, according to Urban Dictionary, is a cast off of “jury rigged” and denotes that the fixed-up contraption will most likely not work.