At a political rally in Wonderland … 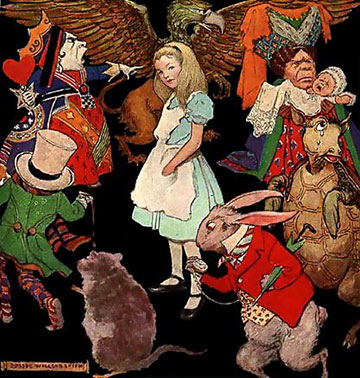 Our beguilingly befuddled heroine, Alice (who else?), was muddling her way through the hugger-mugger of a most unruly crowd of partisan expatriates.

She was feeling a tad topsy-turvy as a result of guzzling a gallon of green goo which had been labeled in a language of gobbledygook that she hadn’t even tried to decipher before drinking (a word to the wise: never wander into Wonderland thirsty).

While Alice fumbled amidst the fray of white rabbits slinging wristwatches at men primly dressed as playing cards, she struggled to …

make sense of the mumbo-jumbo being muttered into a microphone somewhere in the vicinity of the looking glass.

As far as she could tell, the Cheshire candidate, who was running against the—you guessed it—Mad Hatter, offered little more than a sly grin in a sharp suit.

The last thing that Alice heard before catching a stale crumpet against her blond crown was, “All hail the Queen!”

Of hearts, of course.

Then, down she went, higgledy-piggledy, into a heap of chiffon and curls.

With consciousness slipping swiftly away, Alice felt a vague sense of vexation at the likelihood that she would not regain her wits in time to vote.

Now, how’s that for a bunch of bafflegab?

Footnote: The silly terms in this entry are genuine dictionary-defined words!

Higgledy-piggledy: in a jumbled, confused, or disorderly manner