Goin’ with the Flow

The earthquake disaster in Japan obscured anything else going on in the world at that time. Even my world stopped (my son, daughter-in-law, and toddler grandson live in Tokyo), but nature didn’t. 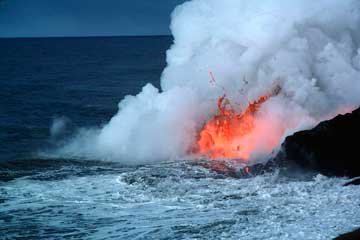 Lava flows from the Kilauea volcano on the island of Hawaii. Photo courtesy Wikimedia Commons.

Hawaii has been dealing with a burst of activity from one of the world’s most active volcanoes: Kilauea. Pronounced: keel-ah-way-ah

Kilauea Volcano, on Hawaii’s Big Island, has been in constant eruption since 1983, but last March, everything changed. Soon after seismic activity was reported, the floor of the Pu‘u ‘O‘o (PUU-oo oh-oh) crater collapsed some 400 feet and a new fissure opened, spitting lava 80 feet up into the air. (Watch a video of it here.) Since then, Hawaii has needed the help of reinforcements to control wildfires, measure countless earthquakes, and anticipate the threat posed to a nearby rainforest. It all sounds so unlikely and it made me wonder… what else don’t I know about the untamed geography of our 50th state? 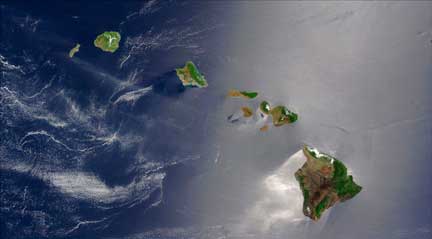 For one, the Hawaiian Islands themselves were formed by volcanic eruptions. A hotspot, or hole in the earth’s crust, allowed lava to flow upwards, through the ocean, until an island was formed (Kauai, kah-why-ee). The Pacific plate, on the surface of the earth’s crust, moved the island over, and the Hotspot created another island (Oahu, O-ah-who) next to the first. The process repeated until an entire chain of islands had formed. Some of Hawaii’s volcanoes are now extinct or dormant, but the state is still in a wild state of evolution. In fact, scientists anticipate that we’ll have another Hawaiian island in 10,000 years.