Can’t wait for a luncheon!

No worries, my dear.

I didn’t make this one up,

“Nuncheon” is every bit as real a word as luncheon,

and both were invented in the 19th century

(by Mother Necessity, of course).

After all, a gal can get mighty hungry come mid-morning. 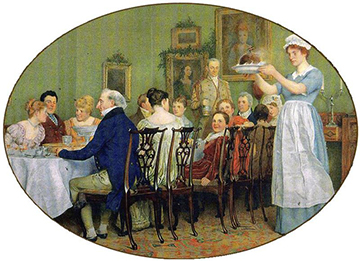 At the beginning of the nineteenth century, breakfast often occurred well after sunup, and dinner came along in mid-afternoon, so lunch as we know it wasn’t really an issue.

But as time went by, dinner got pushed back hour-by-hour, and, well, you can see the obvious problem.

“Luncheon” began to light upon the tongues of the hungry, but some cynical soul deemed it a vulgar term.

Somehow, nuncheon (which may have been pronounced noon-shine) was easier on the ears.

According to period author Regina Scott of Nineteen Teen, nuncheon food “was laid out on a sideboard in the dining room, and you could pick from cold meats like ham and roast beef, pickles, fruit preserves, and dessert-type items like cakes, buns, and tarts, all washed down with ale or tea. You might even grab up a sandwich of bread, meat, and cheese.”

Yes, that was my tummy grumbling.

“At least in some circles, however, luncheon was considered the resort of old men, young mothers, and children, in other words, those who were not strong enough to make it through the day without a little pick-me-up,” Regina explains. “And it was definitely a family affair–one did not invite guests to lunch as one did to breakfasts or dinners.”

Alas, some traditions were made to be broken.