Ahhhhh, how sweet. My sis came weekend before last, arriving with her daughter and husband from southern Idaho. I decided we’d really, truly take the weekend off. No NOTHING on the agenda other than good food and conversation.

It was special because it’s the first time in years we’ve been together without children underfoot. Tina, and husband Ron, have six children, their oldest serving in Afghanistan, their youngest in grade school. Sis, Judy, has an autistic/down syndrome child still living at home. Where were the kids? Judy’s husband stayed home with them. Tina and I enjoyed reminiscing the summer she lived here with us when she was a teenager. She grew up to be an inspirational mom and a force in her community. But where did 20 years go? Once they arrived home, Ron, a writer and school administrator, posted an entry on the family blog I’d like to share. Take it Ron!

Dawn whispered a soft “Good morning!” through the curtain-less east window. I opened my eyes to look out over the autumn, wheat-stubble-covered, rolling hills of the Palouse. Small clusters of tall pines idled here and there. 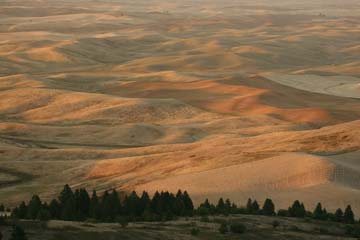 I was born and raised among these hills and I feel secure in their gentle embrace. MaryJanesFarm lies just south and east of Paradise Ridge, near Moscow, Idaho. Aunt Mary, as she has always been called by my wife, had invited us to come and visit her on the farm. The stars aligned just right and circumstances allowed us to make the trip.

Paradise Ridge is rightly named and MaryJanesFarm is appropriately located. It is a magical place—unearthly, ethereal, a place separate from the busy-ness and business of regular life. I considered the words “Nirvana” and “Shangri La” as I enjoyed the blissful experience. (Sometimes I confuse the word Nirvana with Minerva, but she may have been there as well.) 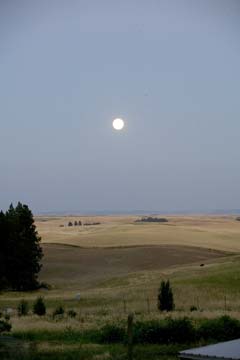 I awoke this memorable morning in an antique bed, comfortably ensconced in bedding from her line of linens. Holding me in place all night had been a comforter like none I have ever seen or felt—large and extraordinarily soft and warm. 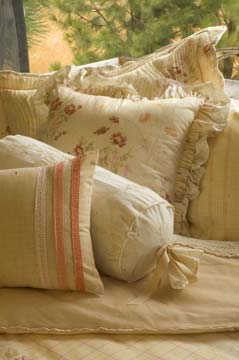 For a time, I simply lay still watching the emerging pastels in the eastern sky. There was a temptation to remain where I was and let the world go its merry way. On the other hand, something called me out to be a part of the dance, to experience as well as to see.

While others slept, I quietly dressed in my running clothes and headed out into the quiet reverence of the morning. A solemn choir of birds serenaded the sunrise. Dozens of varieties participated in the supernal cantata. I was touched by the simple elegance of the scene and was careful not to disturb my surroundings—rather, it was my desire to absorb as much of the occasion as possible, to become a part of it and take it with me when it came time to leave. I glided east down Wild Iris Lane with the sun ahead of me; patiently waiting behind the disintegrating clouds. On my run, I saw no vehicles, and apart from the birds, I saw no other wildlife, but I did feel the large, brown eyes of deer on me from out of the tall grasses and from out of the brush. A few deer emerged gracefully in a nearby field a bit later as we drove our car back up Wild Iris Lane later that day.

Often when I run, I will have music in my head. This morning was no different. Heading out into the celestial daybreak, I had “Puff the Magic Dragon” sounding in my head. I considered the significance of the song and wondered how it may have arrived in my head that morning. Truly, MaryJanesFarm is a magical place, and certainly, dragons would not be unwelcome there, especially those that collect antiques, “string, sealing wax, and all that fancy stuff.” I believe, however, on this particular morning, the song was in my head because of the “autumn mist” that lowered over the top of Paradise Ridge, and here I was “frolick[ing],” in a way. Whatever the reason for it being there, the song was in my head and I made no attempt to chase it away.

At the end of the lane, I turned north to run up the south side of Paradise Ridge. My arms and legs felt vigorous and strong; my lungs clear and healthy. I had a goal to run to the top of the ridge and back. However, I didn’t wear a watch and I had no predetermined distance or destination. As I reached the top of the ridge, I continued on as if beckoned by an unseen power; perhaps the mysterious, mythical, and elusive giant Palouse earthworm. Whatever the cause or case, I descended a short distance until I rounded a corner and arrived at a point overlooking Moscow. I stopped for a moment and looked out over my birthplace, the cradle of my existence. Though much has changed in the years of my absence, I felt welcome, at peace, and at home. 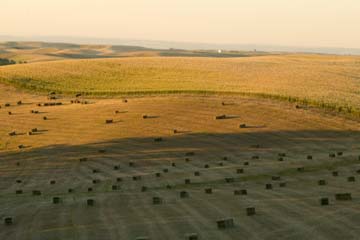 My thoughts on this serene morning returned to the previous evening. We sat in quiet surroundings—no phones, no TV, no computer, and none of the mechanical or digital distractions of regular life. We sat comfortably, surrounded by countless articles that reflect a simpler life of times past; furniture and decorations that depict the farmhouse ideal. In this setting, we engaged in the ancient art or practice of conversation. We visited about a variety of subjects: of life and family, of work and wonder, and of hope and purpose. Mary recounted some of her projects, past and present. Then she shared with us some of her future book ideas, projects, and undertakings, some involving bread, cows … and dragons? 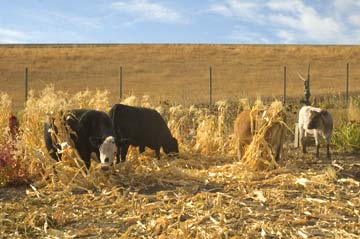 From that memory, I began to think about the definitions of dreams, purpose, and what it means to be successful. This caused me further reflection on my own life, my own dreams, where I have been, where I am now, and where my life may go in the future. In the end, I could only conclude that I am content. I am greatly blessed.

With the progressing sunrise and the breaking of day, I descended Paradise Ridge and made my way back up Wild Iris Lane. I looked at the colors of fall: the yellows, tans, and browns. I enjoy the changing of the seasons and all that each has to offer. As I admired the majestic colors, the sun emerged from behind a cloud, and with a sudden cymbal crash, yellow turned to a dazzling and brilliant gold. It was a perfect exclamation point to a storybook moment. I was enchanted by the magic of MaryJanesFarm on a singular October morning.

P.S. If ever I turn up missing, before you call the police to file a missing person’s report, you should check MaryJanesFarm first. There’s a good chance I will escape there someday.