At about 4:30 this morning, I awoke to hear a friendly bird outside my window. My heart brimmed with whimsy as I whisked off my quilt to begin the day! 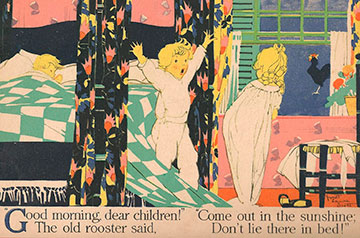 Okay, clever girl, did you catch the literary device I employed in the sentence above?

It was neither alliteration nor hyperbole,

not metaphor or simile …

So, what could it be?

The repeating short “i” sound I used to describe my morning is an example of assonance, a rather tricky technique involving the repetition of words that share vowel sounds but have different beginning and end consonants.

Told you it was tricky. And I’m not even sure I have it right.

It can be tough to pin down instances of assonance (it probably slips right past most of us), but ambitious writers have been known to rely on this device to set the mood of their text. Long vowel sounds tend to s-l-o-w the energy of a passage, making the tone more somber, while short vowel sounds lend a literary lift.

Assonance has been used by all sorts of famous wordsmiths …

“He gives his harness bells a shake

To ask if there is some mistake.

The only other sound’s the sweep

Of easy wind and downy flake.”

“Eagerly I wished the morrow; vainly I had sought to borrow

From my books surcease of sorrow—sorrow for the lost Lenore.”

“Poetry is old, ancient, goes back far. It is among the oldest of living things. So old it is that no man knows how and why the first poems came.”

Do you dare to come up with a line or two of your own using assonance?