The mere mention of mass-transit traveling has the uncanny power to elicit less-than-mannerly behavior. Groans, growls, and eye rolling are the reactions you get when …

… the topic turns to subways, buses, trains, and planes. I’m no exception. Hey, I’d rather ride horseback to almost anywhere than squeeze into a crowd of strangers in hopes of securing a seat. It’s what I call a rugged ride. 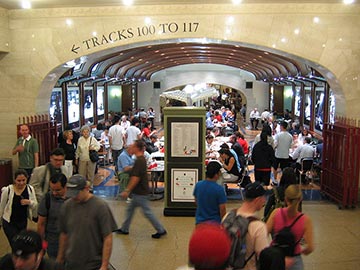 That said, the uncomfortable aspects of traveling en masse make manners even more critical. Often, it’s the indecency and impertinence of other passengers that make mass transit miserable. So, this is where the whole Golden Rule concept gets a workout. Instead of letting a squashed subway ride give us the bug-off blues, how about if we try to lead with our own benevolent behavior? We might just inspire others to reciprocate, helping everybody have a more pleasant passage. 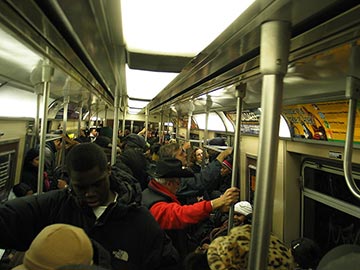 Here are a few ways we can get off to a good start:

1. Summon a Smile
Smiling is the simplest gesture of friendliness and accommodation. It takes the edge off, magically making others feel at ease. And have you ever witnessed the good vibes get groovy when you smile AND offer a seat to someone who needs it even more than you do? I love that!

2. Cultivate Our Inner Zen
Instead of rushing and shoving our way through crowds, we can make a conscious effort to relax. Taking a “Zen” approach will not only help keep our own stress levels under control, it will reduce our natural tendency to get cranky and spread frustration to others.

3. Be Prepared
When we arrive at the transit station, it’s practically our civic duty make sure we have our money and ticket ready. Fumbling through a purse at the counter slows the flow of traffic, sending people’s tempers through the roof. Before leaving the house or hotel, I tuck necessary items into a convenient pocket so that I can produce them in a flash.

4. Maintain a Low Profile
I don’t mean a trench coat, dark glasses, and a Marx mustache. Ha! The idea here is reducing smells, habits, and germs that can bring a crowd to the boiling point. A conscientious passenger tries to keep breath and body odor (including strong perfume) at bay. A handy tin of peppermints and a travel-sized deodorant stick can be lifesavers! By the same token, even sore tootsies must keep shoes on during the ride (do unto others …). Of course, yawning, coughing, or sneezing are best met with a crook of the arm.

5. Go with the Flow
When entering a crowded vehicle, I always try to keep moving until I find a suitable seat. It can be tough to do when you’re tired and bleary-eyed, but hesitating to scan for seats, talk to a friend, or fumble with baggage blocks the flow of traffic.

6. Tone It Down
When conversing with a friend or talking on a cell phone, we can respect those around us by talking in what teachers call our “inside voices” (StellaJane brought that little gem home from school). Because cell phones can be tough to hear in a crowd anyway, it might be best to switch them off for the ride, or at least keep conversations brief. Also, of utmost importance: forgo foul language. A potty mouth is downright distasteful, particularly if children are within earshot.

7. Be Aware of “Your Baggage” At All Times
When we’re carrying a big purse, backpack, bag, or even an umbrella, let’s be mindful when moving past other passengers. Keeping baggage close to our bodies and taking care not to hit people as we pass are just common courtesy. Once seated, I am fastidious about stowing my belongings securely so that they aren’t spilling into the aisle for others to trip over. I’ve tripped over enough bags to know it’s not something I want to inflict on my fellow travelers. I once had a guy on an airplane reach into the overhead bin and drop a hard-cover book on my head. I didn’t have to say a word; my fellow passengers gave him a good scolding as he apologized profusely. It was an uncomfortable moment for all of us and could have been easily avoided.

Are you a frequent mass-transit traveler? If so, share your secrets for managing stress and maintaining good manners.